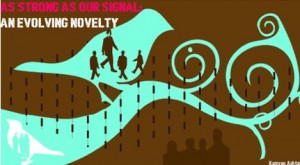 The emergence of technologies summarized as new media undoubtedly provides new means of activism for the world’s people. It remains a question as to whether or not we will ever see again a mass movement that does not have new media activism components.  The gathering of examples, insights and events has given media analysts almost unmanageable amounts to consider.  New media activism is coming of age, with a large body of literature that attempts to bring about a form of self-awareness to this medium.  Activists are grappling with critical queries about who creates, engages with and controls even alternative media spaces.  A portion of the literature tries to define what is and isn’t new media activism, its goals, manifestations and identity.  This has likely been a processual reality for most media and is not surprisingly taking place in such a ‘living’ and current medium with ever increasing power on the world stage.   I will now go on to discuss some aspects of this reflection.

Mode of Operation:  The ‘How shall we do it’

Some theorists and activists who are both analysts of media movements as well as producers of alternative media are at a vantage point to discuss the transformation of new media over time and are in many ways attempting to steer the direction of new media activist efforts.

The most predominant writer on such subjects may be Geert Lovink. Lovink’s body of work includes articles such as ‘Mapping the Limits of New Media’, ‘ A virtual world is possible’ and other contextualizing pieces. In many of his interviews with other important new media thinkers and activists, questions are raised about how much to challenge the mainstream media, or the relevance of the fact that much online organizing is centered around offline events and if this relegates new media activism to eventism. (Lovink, 2002) Much of his work describes the history and origin of the movement with discussion of what he believes to be its anti-globalization roots.  There has also been production of glossaries to assist in understanding the complex technology and language of new media activism. (RAQS, 2003)

Some literature challenges the idea that new media is as inclusive as it claims.  Questions of who produces such media, has access to the required tools, the literacy and perhaps the confidence to engage with it as well as the resources to be sustainably involved is queried. AudienceScapes, an African development brief discusses the actual participation of women in less developed settings in new media technologies, challenging commonly held views about the liberating capacities of new media for women with less access. (Bowen, 2010) Worth noting however, is that this same media is what houses AudienceScapes and the problematizing conversation.  Such issues are also queried by Geertsema in her analysis of Gender Links in South Africa. (Geertsema, 2010) Academics have begun to discuss what new media might mean for women in the Arab world with a number of events and conferences in the past years. Such as ‘SMS Women and Social Activism in the New Media Era’ and ‘Women and the New Media in the Mediterranean’ event held this past summer. While on the one hand, new media organizing promises abilities to go beyond common stereotypes and prejudices due to the lack of ability to know who one is organising with, it also falls victim to common critiques of access and participation resulting in a negotiation of power and participation even in this inherently more democratic form of media.

To What Effect?  For What?

Lovink argues that despite the enormous potential of new media, society has changed very little: “Societies adapt to ICTs but do not change in a fundamental way and prove remarkably flexible in staying as they are.” (Lovink, 2007: 19)   To a degree, Rosalind Gill and Margaretha Geertsema might agree as while the potential and veneer exists for new medias to be more inclusive of women as producers of media, this remains an unfulfilled possibility.  Others yet discuss the realm merits of ‘clicktivism’ such as the numerous online petitions. (Mostatabi, 2011) Certainly the discussion of where even new media activism regarding developing countries is taking place could propose the same early conclusion as much of this online organizing and buzz is being done, in a sense, on behalf of developing countries from higher resource settings.  Bound to emerge is a body of literature attempting to measure the impact of new media activism and analyzing what these exciting new means of organizing have in fact achieved.