“[…]our purpose is manipulation – the persuasion of a large number of people to act, feel, think, know in certain ways – the convenient formula will be that of the masses.” (Raymond Williams, as quoted in Fuchs, 2011) 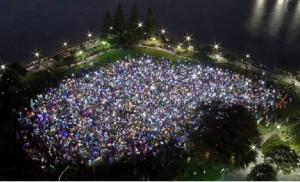 Nowadays, using social websites to promote social movements is an accepted reality. Many activists use these websites to organize events and spread information, and governments are becoming more aware of these kinds of activities on social websites like Facebook and YouTube. In his discussion of the UK riots that took place in August of this year, Christopher Fuchs writes:

“… the BBC took up the social media panic discourse on August 9th and reported about the power of social media to bring together not only five, but 200 people for forming a rioting “mob”. Media and politicians created the impression that the riots were orchestrated by ‘Twitter mobs’, ‘Facebook mobs’ and ‘Blackberry mobs’. After one a few month ago told we had ‘Twitter revolutions’ and ‘Facebook revolutions’ in Egypt and Tunisia, one now hears about ‘social media mobs’ in the UK.” (2011)

Though these kinds of websites were primarily established to provide entertainment, and the majority of people joining social media platforms are only there to have ‘fun’, there is a growing body of users who are experimenting with ways to use these social networks in the pursuit of more serious goals. Nishant Shah discusses this ‘fun’ aspect of flash mobs in his brilliant essay entitled Once Upon a Flash (2006), where he describes flash mobs as artistic performance, such as group dancing in public spaces. ‘Improv Everywhere’, a New York City based prank collective, provides more examples of ‘funny’ flash mobs on their website,[1] and the description from their recent book, Causing a Scene, provides a good illustration of the phenomenon:

“From the infamous No Pants! Subway Ride to the legendary Grand Central Freeze, Improve Everywhere has been responsible for some of the most original and subversive pranks of the Internet age. In ‘Causing a Scene’, the group’s agents provide a hilarious firsthand account of their mischievous antics.” (HarperCollins, n.d.)

On the more serious side, flash mobs are proving to be an effective way of protesting autocratic governments, and have the potential to become an integral part of new social movements. One can look at these ‘funny’ flash mobs as practice rounds for more serious actions to come, such as how the funny SMSs that are often sent between friends in Iran paved the way for the use of SMS as a powerful tool to spread the news.

According to the American Heritage’ Dictionary of the English Language, “Flash” can be defined as: “a sudden and brilliant but short-lived outburst of light”, and “Mob” can be interpreted as the lack of law (2000), so we can understand the meaning of “Flash Mob” as: a sudden and brilliant but short-lived outburst of lawless group activity. In the words of Nishant Shah, to “Organize, congregate, act, disperse – that is the anatomy of a flash mob.” (2006: 132) More than just for ‘fun’, this recipe is becoming particularly useful in the resistance against unjust rules, as we are finding that activists are using the flash mob as a “political weapon” for change, and a way to have “serious fun” (Shah, 2006: 134).

The use of flash mob techniques make it possible to organize groups of people who (mostly) don’t know each other, to be united by common goals. But we should not forget that the use of social media also makes activists more vulnerable. As discussed in the next section, social media allows governments to infiltrate activists groups in order to identify and persecute flash mob participants. At the same time, as activists become more and more reliant on these new tools, the protests themselves become dependent on access to social media websites – meaning that if governments shut down these websites, many activists are left unprepared and unable to communicate.

While flash mobs may not create sudden political changes, the cumulative effects may prove to be incredibly powerful. If we think of an autocratic government as a glass of water, and each flash mob event as a weak attack that leaves invisible cracks that multiply and grow, we may find that one day, the glass will explode.