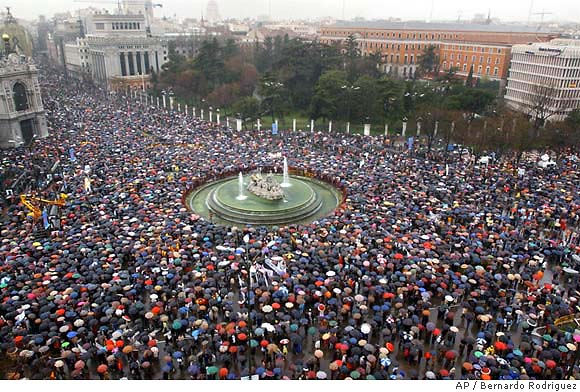 Nowadays the main forms of media activism include “electronic advocacy, hacktivism and culture jamming.” (Cammaerts, B. & Carpentier, N. (eds) 2007:217) “Without the media and modern information technology, globalization as we know it today would not be possible. Access to various media to telephony and the digital services, is often held to be crucial to our political, economic and cultural development.” “Specifically communications satellites and digitalization – not at least the internet – have had an enormous impact. These innovations have opened up worldwide markets for media products such as television program, films news games and advertising. They have been a sine qua non for the information across national frontiers.” (Hemer, O. & Tufte, T. 2005:204).

One of the examples of the above mentioned are a number of events known to the world, such as the “political manipulation after the Madrid, March 11-14, 2004 terrorism.  On Saturday 13, someone in Madrid sent an SMS to his friends though his mobile phone. The message was to protest the officials. The first number which was 15 people at first then increased to 5000 thanks to the media activism.

The biggest part of success

Today it is impossible to imagine any social change, a huge change without the interference of ICT. There are thousands of successful cases in the different spheres of life where activism and participation has been achieved though media. Today it has become possible to create powerful networks and achieve your goal through the network only because the media was used correctly.  Let’s remember the unprecedented victory of the US president Obama during the elections in (Manuel Castel, 2009. Communication Power). One may think that the guarantee of success was the public speaking skills of the president, but not only. Castells mentions in his “Communication Power” that at the beginning of the 21st century political leaders have shown little trust to the influence of internet during their political campaigns. Obama showed the opposite. During his elections online democrats outpaced Republicans in using online videos. Moreover, Democrats were much more ahead among social networking. As Castell mentions, the biggest part of their success is thanks to the active usage of media.

Because of the violation to the WHO code and the misleading recommendation in Sweden regarding breastfeeding, people that promotes nursing have started group blogs and Facebook groups that discuss and share information about nursing and the WHO code. Such groups are the Swedish Ammavidare (http://ammavidare.blogspot.com/, http://www.facebook.com/amma.vidare) and Amningsbloggen (http://amningsbloggen.blogspot.com/, http://sv-se.facebook.com/pages/Amningsbloggen/140579626001971).

Amningsbloggen wrote on their blog about when a woman in Sweden breastfed her baby at an Åhléns café and was forced by security to leave the place. Amningsbloggen thought that it would be a good idea to support the woman by doing a nurse in at the café.  A nurse in is a form of flashmob with breastfeeding in focus. When women are not allowed to nurse their babies at public facilities a flashmob is arrange to show that babies have the right to eat where ever they need. Amningsbloggen urged women to participate in this campaign through its blog, and many people started to discuss the flashmob in the blog´s commentator field (http://amningsbloggen.blogspot.com/).

Another example of a flashmob, that are described at the blog, is when there a few years ago was a flashmob at a council meeting in Gotland. Some politicians had complained that a woman breastfed her baby during the meetings at the council, and Amningsbloggen were upset by these complaints and arranged a flashmob at one of the meetings (http://amningsbloggen.blogspot.com/). There were four mothers who had their children with them at the meeting, and they breastfed them when they were hungry. Amningsbloggen said that it was a quiet manifestation, and if the children became sad the mothers left the room for a while so they would not disturb the meeting. The purpose was not to disturb or to make a mess of the meeting but to change the attitude of peoples mind.

Social change through activism in the new media/Internet

The term activism refers to the “ability to act and make or change history” and is an “intentional action to bring about social or political change” (Cammaerts, B. & Carpentier, N. (eds) 2007:217). Activism, happening in the new information and communication technologies such as the Internet, is revolutionary. There is a consensus that the new media represent “a groundbreaking tool for global democracy” (Kahn, R. & Kellner, D. 2004:88). For example the wake of the 11 September terror attacks has resulting in political activism against terror on a global scale, with the internet as a central role. The Internet has become a base for an unparalleled worldwide anti-war/pro-peace and social justice movement. Therefore, and to be able to participate “in the ongoing struggle inherent in cultural politics”, it is important to understand these new public spheres (Ibid.:88, 93f). Within the Internet it has developed new forms of socially-interactive forms and expression tools, such as wikis and weblogs/blogs, which connects citizens and activists to each other so they easy can share ideas and opinions which propagate and bring social changes from “the below” (Ibid.: 89). The internet was about forming a global network of informative websites, and the blogs takes it a step further and make it possible of an ongoing dialogue and debate with the opportunity to easy write and give commentary response, so that the information is spread and interpret in different ways (Ibid.:91). With the different expression tools in the new media, online activist subcultures has occurred, (Ibid.:94), for example there are many group blogs, such as the American Samizdat (http://www.drmenlo.com/samizdat/), Metaﬁlter (http://www.metaﬁlter.com), BoingBoing (http://www.boingboing.net) and Indymedia (http://www. indymedia.com) which post and comment upon news and events (Ibid.:91).

Activist bloggers have also demonstrated the ability to influence on decision making. One example of this is when the Speaker of the House Trent Lott made some racist remarks and those were “buried in the back of the Washington Post”, until communities of bloggers began to publicizing them, which led to Lott´s removal (Ibid.:92). Some more example of were activism have result in change is the adoption of most of the ecological policies and the legislative change allowing samesex couples to marry or adopt children by most democratic countries (Cammaerts, B. & Carpentier, N. (eds) 2007:218). So through the internet activism “Social and cultural change has become […] a process that involves changing attitudes, values and behaviors, hearts and minds of citizens (sic), after which the issues ideally permeate into the formal political agenda, leading to changes in the law” (Ibid.). As a result of these new media activism developments, violence has (at least in democratic countries) largely lost its legitimacy as a tool to resist or promote social change (see examples of this from Georgia 2003, Ukraine 2004, and Lebanon 2005) (Ibid.). “Media, in this context, can be understood both as a medium to communicate, propagate and interact, as well as a battlefield – a ‘symbolic arena’ – for the struggle to signify, where meanings making sense of the world and ideas of what citizenship entails – from a national, but increasingly also from a regional or global perspective – compete” (Ibid.:220). That is why the new media activism/Internet is a living force and one of the keys to understanding and shaping the political and cultural life and to bring social changes in a peaceful way (Kahn, R. & Kellner, D. 2004:88f). Different political events, such as the World Summit for Sustainable Development, the World Social Forum, and the G8 forums have therefore also started to use blogging in their work with development and change (Ibid.:93).

Welcome to our blog

This blog is put together by Anna Konjoryan and Emma Åström. We will on this blog present key findings from a literature review assignment on New Media Activism.