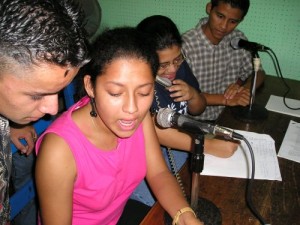 Say “community media” and an image of a local radio station, run by amateurs producing locally oriented news, might pop up in your head?
At a first glance the concept of community media seems quite easy to define, and you can find hundreds of existing examples of community media initiatives like the one described above. But while digging deeper into the topic you soon end up with some definition challenges.

Like Kevin Howley writes, quoting himself, “community media is a ´notoriously vague construct´” (Howley 2010: 15). He continues by stating that there are many terms for describing “media that´s produced by and for local communities”, such as: participatory, alternative and citizen’s media. And that the technology for transmitting the locally produced media can vary (Howley 2010: 15).

Leah A Lievrouw is calling one genre participatory journalism or participatory media within the greater genre of alternative and activist new media and is presenting Indymedia as one of the most important examples of that (Lievrouw 2011:125). Community media initiatives have been around for decades, so how come participatory media suddenly is discussed as something new? Is it really new or is it just the same concept trying out new technology…?

Though difficult to define, there are, of course, some suggestions of definitions of community media. Howley does one attempt:

“By community media, I refer to grassroots or locally oriented media access initiatives predicated on a profound sense of dissatisfaction with mainstream media form and content, dedicated to the principles of free expression and participatory democracy, and committed to enhancing community relations and promoting community solidarity.” (Howley 2005: 2)

The community can be territorial or geographical – a township, village, district or island. It can also be a group of people with common interests, who are not necessarily living in one defined territory.”

Two definitions that contradict each other at one important point: must a community be local?

What is a community?

No matter how you twist it, the term community plays a vital role while trying to define community media and positioning it within the greater genre of alternative media. Howley describes one of his attempts of defining community like disappearing “down that particular rabbit hole” (Howley 2005:5).

Howley does think that the local aspect of community is important, and he suggests that globalization “intensifies the significance of place” because “place provides a basis for individual and collective identity formation” (Howley 2011: 9). Since communication plays an important role in the process of shaping individual and collective consciousness of the relations of ´significance and solidarity´ called community (Williams 1973 in Howley 2011: 9), Howley argues that while “dominant media tend to conceal the interconnected and mutually dependent character of social relations, community media work to reveal this fundamental aspect of human communities.”(Howley 2011: 9) And therefore the democratic structures and participatory ethos are important ingredients in community media.

Another view on community and the construction of identity is offered by Auli Harju in Reclaiming the Media. He claims that an identity includes the idea of belonging to a community, and that community can be local. But a collective identity doesn´t necessarily depend on geographical proximity, that it´s merely a system of relations and representations. (Harju in Cammaerts and Carpentier 2007: 95).

Community media initiatives have over the years questioned the view of the audience as mere media consumers and chosen to see them as social agents within their community that, at least in theory, can take the step from being audience to produce their own media and take active part in the communication process.  Some of the fundamental characteristics of new media such as viewing the audience and media consumers like media users and participants (Lievrouw 2011:1), can be found in many community media projects. But in some cases using traditional technology such as radio creates a boundary between the listener and the producer, and when a similar initiative uses digital tools such as social media the boundary is far less difficult to round. That´s probably why you can find more and more examples of more traditional community media initiatives trying to combine i.e. radio broadcast with internet based platforms or mobile phone solutions.

This entry was posted in Uncategorized and tagged Community Media, Community Radio, Definition. Bookmark the permalink.