Is Facebook a tool for communication, Revolution and anarchy to social change 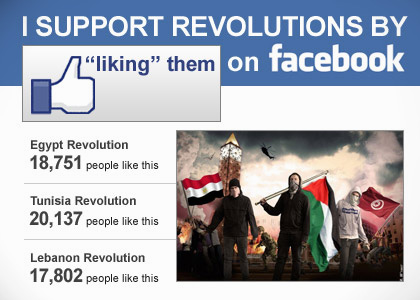 Nowadays technology has made the news of global events, on opposite sides of the world, available in just few minutes.   Technology is the only platform where a lot of different options can appear to please everyone.  But in this forum we will focus on the use of Facebook.
Facebook was the ‘secret arm’ used to create a huge revolution in Egypt.  Asmaa Mahfouz, a 26 years-old common citizen woman (not someone in the field of science or military), wrote on her page, “People, I am going to Tahrir Square”.   That Facebook status became a snowball that resulted in a movement to oust Egyptian president, Hosny Mubarak.
The voice of thousands of people in the streets, demanding the end of the political power of Mubarak, that had ruled the country for the last 30 year, were listened to for the first time,  however where did theyfind the courage to do that? Why did they have to wait such a long time? The fear was the same, what was different now?
“Activists in New Social Movements tend to live their lives in a way that reflects their political, social, and ethical values, to engage in movement actions and commitments according to issues of the moment” (Lievrouw 2011, P.153)
Each time that someone posts something on facebook, such as a thought-provoking article, video, or event, it results in a chain reaction that calls others to mobilize.
We have become an active side of the communication.   The media is the tool, but change is in our hands.  “Social and cultural change has become even more so a process that involve changing attitudes, values and behaviors, heart and minds of citizens”.  (Cammaerts, B. and Carpentier, N. 2007, p. 218).   This example, a few lines on Facebook, that generated a mass revolution, with people on the streets claiming their rights.   In fact, it made a difference.
The new social media is indeed a powerful tool for social movements.   It is not a weapon, but a tool.   It cannot create anarchy.   It is just the mirror of a society that claims for a change.

2 Responses to Is Facebook a tool for communication, Revolution and anarchy to social change