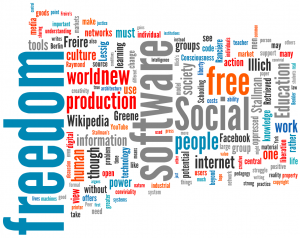 Nowadays the meaning of the New Media could be uncertain, as it strongly depends on what we are going to talk about: just about the internet or about the new technical devices. According to Leah Lievrouw, we characterize new media as information and communication technologies (ICT) and their social contexts, which contain few important elements: “(I) information and communication technologies and their social contexts, which include three main components; (II) the material artifacts or devices that enable and extend people’s abilities to share meaning; (III) the communication activities that people engage in as they develop those divided and the larger social arrangements that people create and build around the artifacts”(Lievrouw, 2011, p. 7) Furthermore, relying on the definition by the author of the book and the fact that both New Media activism and mass mediasystems are growing rapidly, we might have to admit the fact that both ICTs and New Media are considered as valuable in a matter of development and social change.
One may also say that New Media, such as the Internet, is discussed as an inexpensive and powerful tool that gives to everyone an opportunity to build communities and a possibility to gain visibility and voice. But on the other hand, the breakthrough of the New Media Activism has raised few problems connected with the privacy and security, political participation and freedom. (Lievrouw, 2011, p. 2) Let me draw your attention to the fact how Internet freedom is being emerged during last few years when Facebook as well as Twitter became extremely popular.

For instance, “Mr. Cooper QC’s warning comes after a New York court ordered Twitter to hand over messages posted on the site by a demonstrator belonging to the Occupy Wall Street movement in America. Malcolm Harris, 23, is accused of disorderly conduct after he was arrested on Brooklyn Bridge during a protest last October”.(Rawlinson, 2012) In other words, both the police and governments worldwide are monitoring key activists online and becoming shrewder when it comes to social media like Twitter, YouTube and certainly Facebook.

I believe the police force will keep on analyzing the Facebook accounts of attestants who they want to weaken, as they want to find any evidence from any source. It is typical evidence that New Media diffused into our everyday work and life. (Lievrouw, 2011, p. 5)

Dilemma remains is it a so-called “right move” to secure the public world or is it a reason to be afraid loosing our freedom while using the New Media tool Internet?