On Monday this week over 87% of those who had registered to vote in Kenya stood in queues at polling stations for up to 12 hours in the baking heat to assert their democratic right.  I walked around the corner from my house and my jaw dropped at the sight of the queues which stretched in both directions as far as I could see. It was an emotional moment.  I am not Kenyan but I have lived here long enough to see how just the thought of democracy catalyses participation.  I have also lived in Britain long enough to see how it is treated with apathy and derision. 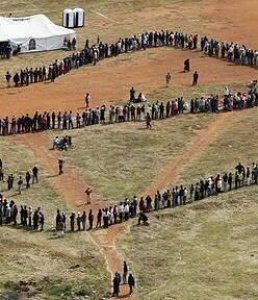 A glance at the people in the queue was interesting not least for the demographic spread but also for the number of people glaring intently at their phones, often with tiny in-ear headphones.  Mobile penetration in Kenya has risen exponentially in the last 5 years – 74% of Kenyans, 3 in 4 people, have a mobile phone.  This in a country where the vast majority of people live on less than $2 a day. Data penetration is growing all the time – mobile data subscriptions account for 98% of all internet users.  The mobile phone is clearly a mighty tool in the pocket of your average Kenyan.

At the last election in 2007/2008 it was used as a platform to turn people against each other.  I remember receiving ‘hate’ messages which had clearly been sent in bulk.  Now the hate messages have been replaced by everyone urging “chagua peace” – “choose peace”.  A message which is not lost on most of the ordinary Kenyans going about their business.  As the count goes on and whispers of irregularities and technical ‘failures’ and possible ‘hacking’ surface, the option to choose peace appears to be wearing thin.

Technology was to be the saviour of this election – biometric registration kits, electronic transmission direct to the electoral commission headquarters, instant provisional results beamed across all tv and radio networks.  Instead returning officers were brought by all means of transportation from all 290 consitutencies with a confirmation of a manual count as the technology was left gathering dust in the polling centres. Kenyans were sold a pup.  By taking out the potential for malfeasance by reducing the human contact with the ballot, we forgot the important role human interaction plays in this process or what Michael Krona referred to in his lecture as the “significance of human participation”.  Seduced as we are by the obvious advantage of technology to help rule out human error, we forgot the essentially participatory nature at the heart of democracy. 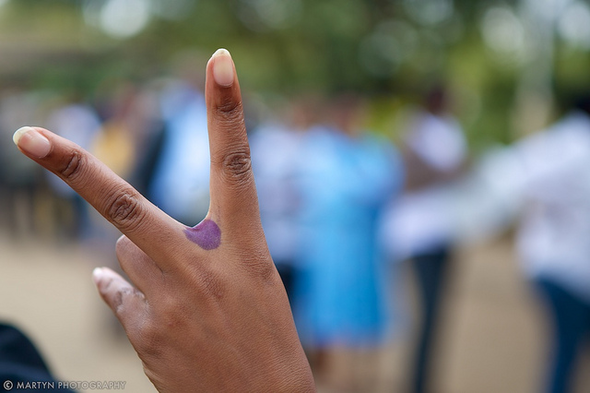 Im guessing that a majority of the people scrutinizing their phones on Monday 4th were people looking to find news of why the polling was taking so long not tweeting or broadcasting their own experience.   Sure that was taking place, but only amongst the Kenyan twitterati.  The average voter was anxiously listening to that most old fashioned of platforms, radio, to find out what on earth was going on.  As partial as I am to ‘traditional media’  forcing binaries does not further understanding. Cammaerts suggests “In order to grasp the complexity of the panoply of civil society actors, as well as their very different strategies and aims, analytical distinctions such as online/offline, alternative media/mainstream media, new media/old media, need to be overcome”  (Reclaiming the Media: p220)

The constant yoking together of technology with progress almost undid all the hard work peace activists, members of civil society and the new constitution had achieved in the last 4 years in one stroke.  The real progress in this election was old fashioned, traditional and entirely participatory – queues of people lining up to put a cross next to a candidate and having their fingernail inked to show they had voted.  The ‘crisis of civic representation’ documented by Inaki Garcia Blanco would appear to have no foundation in Kenya.  However I would not go so far as to say social media had no role to play.

The huge delay in the election count from Monday to Saturday created a huge problem for media outlets.  Into the void stepped social media  with its endless and perplexing flow of punditry, trivia and analysis.  Google hangouts – the online webcasting forum – became a cornerstone of 24 hr news on the domestic channels.  An unmediated, brash, edgy style of engagement came into its own in the absence of ‘real’ news.  Is this an extension of ‘fan culture’  (Van Doonen: 2004 cited in Chapter 4 Reclaiming the Media) or an example of active citizenry and a new dynamic in Kenyan media?

2 thoughts on “Voting, the shock of the old”