Facebook is a tool that creates and enhances connectivity. It consists of different technological levels of design. There is the architectural design and the software that it is based on; this is the Facebook platform. Then there is protocol, which refers to the concepts and rules that its design of functions are based on. They include embedded values, which are possibly held by the decision maker(s). Lastly there is the user interface, which is the Facebook that users can see and access through the website (van Dijck:2012). On all these levels Mark Zuckerberg, who is the owner and CEO of Facebook, has the final say in the decisions being made. The decisions of design have large impacts and social effects, to the extent of norming sociality and embedding values while people are not aware of this (Santo:2013). With nearly 2 billion users worldwide for whom Facebook is a public sphere, and an important communication space, there are however many who have criticized the lack of democracy in Facebook’s decision making process. A study of Stein shows, that the level of participation that Facebook allows its users is very low (Stein:2013). Facebook by now allows some participation regarding their user policies , but none whatsoever regarding permitted content, copyrights, or software modification. Regarding the use of personal data they operate according to a silent consent rule, which has caused a lot of critique

We live in a digital age. With the massive role internet now plays in the lives of the West, it is sometimes overlooked that there are still large areas int he world where access to internet is minimal, especially for the poor. This inequality in access is often referred to as the digital divide. 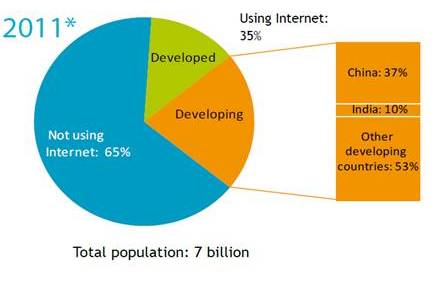 However, within the population of regular internet users, there is already a divide in literacy, between the programmers and the users. Santo (2013) argues that there is therefore a need for hacker literacy; which he calls the third wave of media democratization. During the 21st century he saw the first wave as critical media literacy; the ability audiences developed to transform from passive receivers to responsive publics that questioned the intent, assumptions and biases of media producers. Subsequently, the internet spurred the possibility for publics to create and share content, as they developed participatory media literacy. However, the programmers are still to a large extent responsible for the communication flows and how messages are being distributed. Therefore publics should become literate themselves in this field, so they can influence decisions being made regarding the design of the infrastructure there communication is depending on.

Yet in discussing development goals regarding ICT, it is often not yet a question of how internet should be used, but rather how it can be made available. Robinson for example discusses the access to communication tools of several Latin American communities, and shows that mobile telephony is far more important than internet. The same goes for most African countries, as well as most of Central Asia. Often large companies have a stake in keeping the communication tools that are available to people inefficient and limited, which hinders an increased distribution of internet accessibility. However, merely providing access to internet for these publics should not be the goal. As Pieterse has stressed, the cyber-utopian idea that internet access will solve all the problems of these publics, is a delusion concocted by large companies and stemming from capitalist ideology as well. Access to internet alone might not change social inequality but could even further enhance it, if technology is not disembedded from capital.

To get back to social media for instance, recent history has shown social media’s ability to have severe effects on political and social developments. However, the risks are numerous too and should be taken into account. Shirky for instance mentions risks of promoting internet freedom as a development goal, and shows examples of how things have developed for the worse.

Every now and then we all think back to the times when we did not use internet. How was life back then? It seems hard to imagine as we now spend most of our time on the web. But we could live without it. And many in the West now try to limit their time spent on the web, and for example decide to delete their Facebook account as an incentive to stay away from the computer.

The most heard criticism towards Facebook is that it does not respect the privacy of its users and shares stored personal data and posted content with third parties. Facebook officials have initially responded quite indifferently and arrogant to the critique, stating that if you do not like what Facebook does, you can always leave. However, after the Edward Snowden informed the world how many personal data was tapped by the NSA, Facebook finally published a transparency report, providing insight in the extent to which different governments request user data from Facebook.

Additionally, each time Facebook changes something in their settings or protocols, users automatically have their settings changed to ‘public’ so all their posts become visible to the entire world. They need to change the settings themselves if they wish to, and many users are not aware of this, at least for a period of time.

Sengupta reminds us how governments use new technologies for surveillance and control purposes, and especially how the boundaries civil rights pose on surveillance and control options are usually first expanded in the Global South. The internet is a space as any other where people’s rights can be violated by governments, because even though it is a virtual space it is interconnected with our physical reality. And blocking of Facebook, such is being done in China, is not the only way governments do this.

Facebook is free for its users. Facebook claims its mission to be to empower people and to make a change in the world. However, there are also large business interests at stake. The owner of Facebook, Mark Zuckerberg is currently the richest man of his generation on this planet. Many users are not empowered at all by using Facebook, but rather exploited by it (Van Dijck:2012). Users are the products of the industry. And even though it is known that users do not want their page flooding with advertisement (Beauchamp:2013), Facebook still increases the amount of advertisement more and more each year.

van Dijck, José (2012) Facebook and the engineering of connectivity: A multi-layered approach to social media platforms, Convergence: The International Journal of Research into New Media Technologies, 19(2) 141-155