The last decade has been characterized by a number of revolutions spurred by social media or mobile telephony, as authoritarian governments have been overthrown after fast mobilization through these communication channels.

Everyone probably knows about the Arab spring revolutions and the role social media played in them. 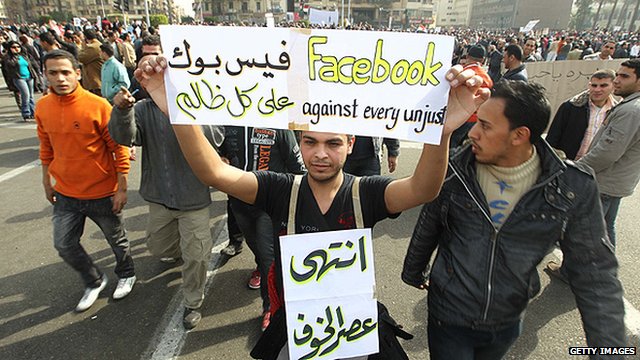 Prior to these events, governments were also forced to leave in the Philippines (2001), Spain (2004), and Moldova (2009), due to mobilization that occurred through new media (Shirky:).

The advantages of the media for organizing opposition, building social movements, and mobilizing large groups of people are amongst others the immediacy and fluidity of these media, as well as the difficulties governments have to control them.

According to White and McAllister (2014), the political consequences of social media are graver for authoritarian regimes than in democratic states.  Authoritarian governments lose control over agenda-setting, and social media by default foster social movements and opposition formation. Responds by governments have been to shut down the internet at crucial periods, build permanent firewalls, monitor information flows, or manipulate information flows.

The enhanced media participation literacy that publics now have due to the internet and social media networks such as Facebook, has turned many people into active media producers. This participation is an important component of democratic development (see for example Carpentier:2011), for several reasons.

Thirdly networked individualism, based on individualism and identification, starts with projects and values of individuals and develops in systems of exchange with other individuals (Castells:2009). According to Hopper (Hopper:2007) networked individualism refers to the engagement of individuals in communities of practice, by using ICT’s to participate in networks. It inspires social movements that build on sharing new values, and in combination with communalism, it inspires social movements of resistance (Castells:2009). It furthermore is expressed through communication systems that are characterized by the use of new technologies, autonomy, horizontal networking, interactivity, and recombination of content under the initiative of the individual and her network.