Facebook is a good focus of study when writing about social media worldwide, since it is by far the largest and most used social network/ social media site on the web to date. With 1184 million users globally, Facebook is followed by Qzone; its Chinese equivalent (see chart below). The other big platforms mentioned in the chart – LinkedIn, Twitter and Tumblr and Tencent Weibo – are not equivalents of Facebook, since they have more specific functions and offer to a much lesser extent an entire environment to its users that provides space for a large multitude of activities and social interactions, such as Facebook and Qzone do.

When looking at social network use per country instead of worldwide, a few years ago there still used to be a considerable variety of sites that were largest in each country. But since 2012 there remain only 3 alternatives that are used more than Facebook; Qzone in China, Cloob in Iran and VK in Russia. However, a large number of countries where a small percentage of the population had frequent access to internet, is not included in these statistics.

In China and Iran Facebook is officially blocked by the government, which is the main reason the alternative platforms have become larger. Yet in Russia, where Facebook is used a lot as well, VK is simply more popular. Russians are therefore the only noted voluntary exception to Facebook domination of its online social sphere.

VK is an equivalent of Facebook in usage, the main difference being the integrated use of torrent downloads and filesharing of music and videos.

Until 2012, other platforms that were popular included for example Orkut (in India and Brazil) and Mixi (in Japan).
Orkut is mostly focused on network building, social circles and communities, as opposed to individual-user focused entertainment. Orkut was launched and owned by Google and has often showed technical mistakes and flaws, and it is prone to abuse. It also does not have a serious privacy policy in place. However, it still has 120 million users.

Mixi, which was launched in Japan, is based on open source software and is focused on community entertainment. It automatically creates music playlists of its users, based on music they have bene listening to. 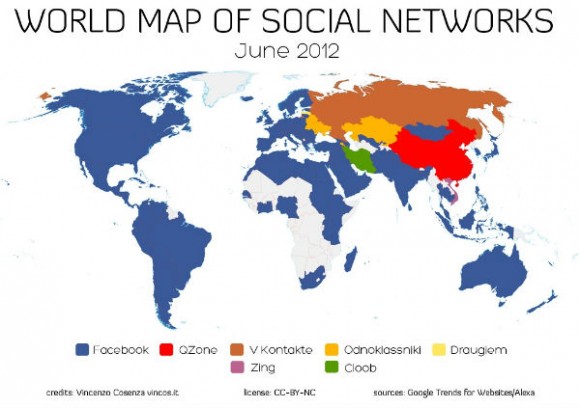 Anne tells us about her experiences with social media in Brazil, being an immigrant from the Netherlands.