On Thursday 31 October 2013, we’ll be presenting our blog. We’ll tell you who we are, how we created the blog, the challenges we faced, and what it contains.

The presentation starts at 9:50 CET, and will be live-streamed through Bambuser.

Please click on the page “Presenting our blog” to tune in!

(Don’t worry: if you miss the live presentation, it will still be there for you to watch afterwards!)

A post on the blog Nonprofit Tech for Good provides a range of tips on Social Media use for NGOs in developing countries:

I received a food-for-thought Ted Talks clip of Evgeny Morozov from 2009, who highlights the unproblematized view of social media as an inherent democratizing commodity.

Thank you  Tove Silveira Wennergren for the clip!

And for you readers, this is a must see – both interesting and amusing! Enjoy! 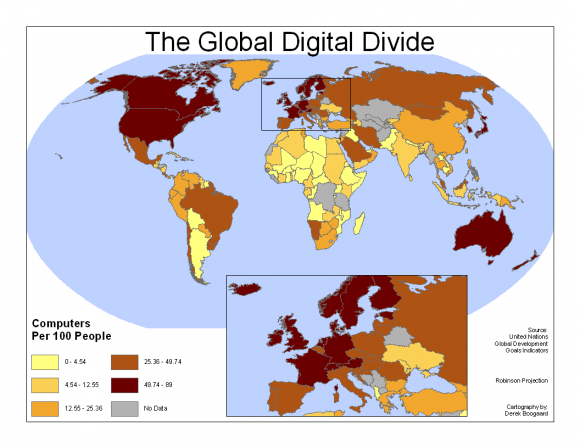 Nowadays we all have access to social media in all its shapes and forms.  By all we obviously assume us, the privileged North.  So who is the social media has been created for? By whom? In the pool of opportunities, potentials, future visions and missions attached to social media phenomena we should pay special attention to one important aspect related to social media and development.  The beginning. The core.  The design in its essence.  What does the so called generic designer have in mind?  What does the designer envision as he winds up the social media mechanism? Who is the designer? Is it the privileged North that creates ICT for the underdeveloped South?  Social media and ICT created in the North have different purposes implied, potentially different from those required and needed to fulfill the needs in the South.  More power, knowledge and opportunities are attributed to the North which naturally enables it to participate in the development of ICT and new media infrastructures and thus, at the embryonic stages, participate in its shaping according to its own needs.  This again and again brings about a notion of the digital divide.  In other words, economic, geographical, technical, social divide accented by Pieterse in Lovink and Zehle, 2005.  Creating even more dependency between North and South due to a fast-paced developmental progress in the North and not such a speedy one in the South.

How does social media benefit the not so privileged ones?  If it is enforced unto them from the top, will it be accepted, will it reach the desired goals and outcomes, will it benefit the developing communities?  Grassroots participation at the initial stages of ICT design and development is essential for ICT projects to be viable, successful and even enjoyable for developing communities as it gives them a sense of ownership, makes them value their own input and enhances their participation in their own development (Granqvist in Hemer and Tufte, 2005, p. 289).

Rao in Hemer and Tufte (2005, p. 276) emphasizes the importance of ownership of ICT and new media by local communities which can be achieved through  1) making it possible for media content to be created by local communities, 2) by making it possible for local language to be used in media, 3) by communities’ ownership and therefore control of websites and servers, 4) by their ability to access information in local language, 5) by the possibility for local communities to create the content and contribute to it in voicing their needs are as opposed to needs perceive by developers.

I’d heard of Storify but never yet used it. Doing this assignment gave me the opportunity to take a closer look at the site that allows you to tell a story using tweets. I decided to take an hour’s worth of development-related tweets off my Twitter feed, and provide them with commentary from a ComDev point of view. The idea was to provide a snapshot of how development organisations use Twitter, a kind of “an hour in the life of”, if you will. I ended up allowing just over an hour, to make room for a few extra tweets.

I tried to embed the story as a blog post, but it looked messy. So here’s the link instead:

Conferences are no longer complete without a hashtag. This has the advantage that, ostensibly, discussions that once might have never left the exclusivity of the conference room are given a broader airing. But what impact has this really had? Tobias Denskus and Daniel E. Esser studied blog entries and tweets written around the three-day United Nations High-level Plenary Meeting of the General Assembly on the Millennium Development Goals held in New York in 2010.

While the means of communication are so markedly different from the world of the first Earth Summit in Rio in 1992, the authors found that the “ritual spaces of conferences” (p.417) are still important, and in this way, not much had changed since the Earth Summit 20 years ago. Social media is now available to spread messages, but do social media merely reinforce discourses, or do social media “create virtual spaces of agency in which these discourses can be scrutinized?” (p.410).

The authors found that most of the tweeters were affiliated with development organisations. And, while these tweeters organised “tweet-ups” (yes, as you probably guessed, that means they met up in person), this would also seem to have reinforced this ritual space.

Surely these increased means of communication we now have at our fingertips have the potential to make a difference? Significantly, the authors conclude that this was not so in the particular case they studied: social media content generated during the MDG Summit was not found to have made a significant contribution towards global democratic participation in agenda setting. (p.418).

Denskus and Esser’s article is an important contribution to the debate on the use of social media in development. It is all very well to say everyone is doing it, but the important question is: what effect is it having?

The article ends with poignant words by blogger Laura Seay, worth sharing here: “So ends a day of listening to rich people talk about ways to help poor people they’d never dream of letting in the door.” (p. 418).

How many “likes” for Social Media + Development?

Both my previous post discussed social media’s compatibility with development. Both of the posts also expressed rather optimistic stances coming to the democratising ability within social media, how it is grassroots oriented and functions as a medium which allows for accessing information, communicating ideas and mobilizing actions.  Judging from these posts, Social media for development is a victorious composition that make the great bulk of development problems feel much more solvable.  This sound too good to be true, and quite accurately – it is! There are many theoretical and practical difficulties within the notion of social media as an entirely virtuous democratising tool. This post will discuss a few of critical perspectives.

One of the initial critiques of ICT and ICT4D (including Social Media for development) is the digital divide approach. This theory discusses how the ICT stances for solving development issues are dependent on those who “have” and thus disregards the “have-nots”. In order words, the ICT approach re-affirms the uneven global distribution of technologies, which is a pre-requisite for accessing e.g. social media channels. As a reaction to the digital-divide approach, Manne Granqvist explains in his Assessing ICT in development: A critical perspective (2005) how the digital-divide theory in itself  reflect a modernist worldview, where focus is given to uneven global distribution, which is not a new phenomenon, and thus, conceals the political nature of technical systems (Ibid:286).  By such, the digital- divide notion reasserts the idea of development as a series of stages and where the Western society is the ideal (ibid:287).

Following this line of thought, Nederveen Pieterse argues that ICT4D and the discussion of “bridging the divide” is a part of a package deal where cyber utopianism is associated with marketing digital capitalism (Lovink, Geert & Zehle, Soenke, 2005:11). Pieterse explains that ICT4D promotes a techno determinist attitude where the spread of technology equals development, thus promoting a neo-liberal world-order and re-assuring developing countries dependency to the West considering that the technologies promoted are predominantly Western commodities containing western values and norms (ibid:11-13).

Within the idea of using social media as a tool for development is also the pre-requisite that the counterparts are media literate, which Friedrich Krotz explains is a concept derived from the knowledge gap theory (Carpentier, N., Pruulman-Vengerfeldt, P., Nordenstreng, K., Hartmann, M. and Cammaerts, B. (Eds.), 2006:179). The knowledge gap theory focuses on how information uptake is associated with socio-economic backgrounds. However, Krotz in line with the other theorist, affirms that viewing ICT and development from the digital-divide and knowledge gap angle is insufficient since it solely focuses on technologically and economically driven development instead of the actual desires of individuals, societies and communities (Ibid:180).

It is thus obvious that social media for development, as a part of ICT4D, is not entirely free of embedded complex difficulties. Since the idea of ICT4D is still rather new, finding sustainable and suitable approaches are hitherto difficult. It is therefore even more important to continue exploring, researching, scrutinizing and discussing the idea of ICT4D and perhaps not regard it as an already determined commodity for development.