This blog aims to highlight the centrality of the role of community media to questions of participation, democracy, and social change. It is thus important, as an introductory step, to provide a basic definition of concepts such as community, civil society, and community media as they figure in Ellie Rennie’s book Community Media: A Global Introduction. 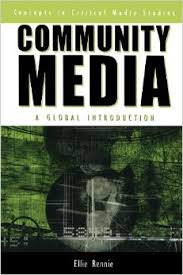 According to Rennie, community is not a static, uniform entity, but rather an ongoing process shaped by interaction and communication. It is a relation that is frequently negotiated. Community does not only denote a geographical location, but also figures in “terms of interest, language, cultural or ethnic groupings”. Although it is thought to be “pre-political”, unplanned, and dependent on a sense of belonging, community can be a type of governance through furthering political aspirations.

As for civil society, it is the domain where community takes on social and political activity. It is referred to as the “the third sector” because it is distinct from the state and the market, but nonetheless linked to both. Rennie adopts Cohen and Arato’s definition of civil society, mainly that it consists of “relations of conscious association, of self-organisation and organised communication”. Civil society is a vital component in the democratic process and hence needs a platform which enables it to engage in communicative action. This is where community media sets in.

Community media, Rennie contends, is a means of maintenance and extension of civil society, as, according to the International Association of Media and Communication Research (IAMCR), it “originates, circulates, and resonates from the sphere of civil society”. It is usually characterized by its  non-profit quality and its representativeness of a certain group. Its aspirations define it as much as its production and operation techniques. Community media allows the participation of community members and is accessible to them as a platform.  It, as Rennie clarifies “has always been about self-expression and seeing ourselves as part of the society in which we live”.

Thank you for your patience! Looking forward to reading your comments.