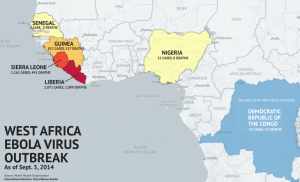 e current Ebola epidemic in western Africa is the worst outbreak of the virus since its discovery, with Liberia, Sierra Leone, and Guinea being the worst-affected countries. So far the virus has killed over 4,500 people. Thomas Eric Duncan recently made headlines in the U.S. when he was diagnosed with Ebola at a Texas hospital after returning from a trip to West Africa. He was the first person in the U.S. to have died of Ebola.  END_OF_DOCUMENT_TOKEN_TO_BE_REPLACED