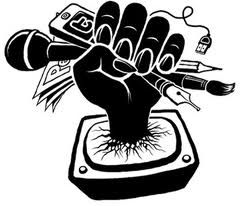 Thank you for visiting our blog.  We are four students at Malmö University’s web based Communication for Development (ComDev) master program.  We are all living in different cities, namely  Barcelona, London, Mexico City and Kigali, from where we will explore different perspectives and cast a critical eye on the area of New Media for Social Change. In particular, we are interested in possibilities and challenges with New Media Activism as a means to achieve Social Change. This blog is a part of the assignment of the New Media, ICT and Development course and is only running during October 2014. Your comments and inputs are highly welcome.

Mariona Sanz is a Spanish freelance journalist with more than ten years of experience in institutional public communication and press offices in Italy, France and Spain. Her main areas of work have been public health, peace / humanitarian operations and, more recently, freedom of expression. Currently she is working as a media development consultant at UNESCO and at the World Association of Newspapers, where she  coordinates a research on the influence of indirect government censorship in the media. Mariona is enrolled in the ComDev Master´s programme to increase her critical perspective and learn new ways  to promote progressive social change through communication.

Sophia Scherer has been working in communications, campaigning and information management with NGOs and the UN both in Europe and Latin America. She is currently based in London and about to start a new job with Amnesty International. She studies ComDev to gain a critical understanding of the role of communications in social change processes.

Zandra Persson currently lives with her husband and son in Kigali, Rwanda. She has an academic background in political science and is especially interested  in questions related to migration and integration. For several years she has been working for the Swedish Migration Board, in the division for asylum, and most recently for the International Organization for Migration (IOM) in Rwanda. “ComDev has been an eye opener about the role and responsibilities of communication in social change processes and in representing societies and people”, she says.

Rasvita Sidagyte currently lives in Mexico City, where she undertakes her traineeship in ProMexico´s Coordination for Europe and Africa division, as a part of her Master degree studies in European Affairs with specialization in Latin America. Her focus area is the relationship between the EU and Mexico, and the future prospects of it. She studies ComDev to gain a broader understanding of media impact and influence on social change in both developing as well as developed countries.

2 Responses to About this blog