2014 and the Ministry of Truth | Newspeak: Minitrue

ICT (Internet communications technology) enables gathering of digital data derived from our online interactions and other iterations such as those that come from GPS (Global Positioning System)-equipped devices. This interactivity being ‘a necessary condition for social, cultural and political participation’ (Lievrouw: 2013, p. 15) functions as a catalyst for change, development and humanitarian relief.

Just consider that all the tweets, blogposts and Facebook entries generate big data and so do all the ‘likes’ and endorsements and any other information pointing to user connection networks and to activity levels of individuals on the Net.

To give you an idea of how large big data actually is, every minute of every day we create

In our previous post Big,BIG, Data Warbles we visited the domain of qualitative analysis of big data. This time around, we are touching on the topic of quantitative analysis of big data. Quantitative analyses permit us to collect sets of data and look at them in numeric values: for example the frequency of rainfall in a certain region, the number of rape incidences in a particular city or the average literacy level in a country. We can then interpret the results and compare them with the same datasets in similar regions or across time to take informed decisions. 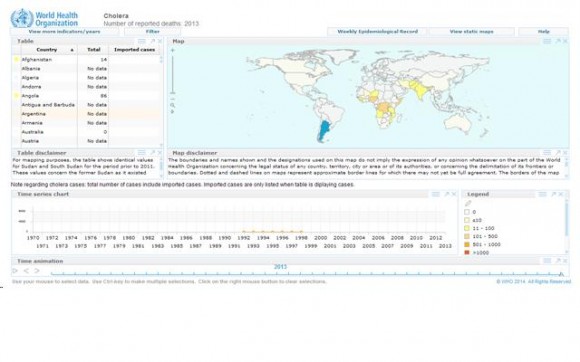 Data is big and data is open: WHO (World Health Organisation) Interactive Map (from the Global Health Observatory Data Repository). Click to enlarge.

In addition to the above, big data can be used for non-statistical purposes, for instance to enable more effective aid and humanitarian relief administration. In the eve of environmental stress and disasters such as flooding, earthquakes or war, people tend to scatter, but the GPS-data emitted by their mobile phones as they are on the move can be tracked. Indeed, the ETC (Emergency Telecommunications Cluster) reports that ‘the Haiti earthquake of 2010 turned humanitarian response on its head. The traditional top-down, agency-driven approach of information dissemination was replaced by a groundswell of data from the very people affected by the disaster… emergency response was faced with a new and vital force: social media’ (2013).

There is however an Orwellian downside to big data, and that is called surveillance. There are fears afoot that big data is being used without the explicit consent of the individuals or collectives that generate it. Big data analytics entails no less than privacy breach concerns.

In this respect, we beg to differ from Manuel Castells’s statement when talking about media, ICT and new communication models he expressed that ‘the rise of horizontal networks of communication has created a new landscape of social and political change by the process of disintermediation of the government and corporate controls over communication’ (Castells: 2013). Disintermediation?

Seen from a big data surveillance perspective, the issue with Castell’s statement is that governments and corporations can (and will) retain control over the masses: beware that ‘new technologies [may] enable audiences to exert much greater impact on circulation than ever before, but they also enable [government and] companies to police once-private behaviour that is taking on greater public dimensions’ (Jenkins et al: 2013, p. 54). The posts we blog and the tweets we produce enable governments and organisations to profile and track us. Coming back to the mobile phones GPS-tracking capabilities we mentioned above, researcher at the University of Amsterdam Linnet Taylor confirms our fears: ‘when migrants move, they are increasingly likely to bring a mobile phone with them; this includes undocumented movement’ (Taylor: 2014). This data, which is big and is open, could potentially be ‘made available to border control authorities in order to track migrants who are travelling irregularly’ (op cit). Food for thought…

This entry was posted on Sunday, October 19th, 2014 at 8:50 am and is filed under Availability, Big Data, Big Data Analytics, Data and Development, Mapping, Open Data, Social Media, Uncategorized. You can follow any comments to this entry through the RSS 2.0 feed. Both comments and pings are currently closed.