#ChicagoGirl – ”From my laptop, I am running a revolution in Syria”

An excellent example of the use of social media in development – commentary by Charlotta Duse. 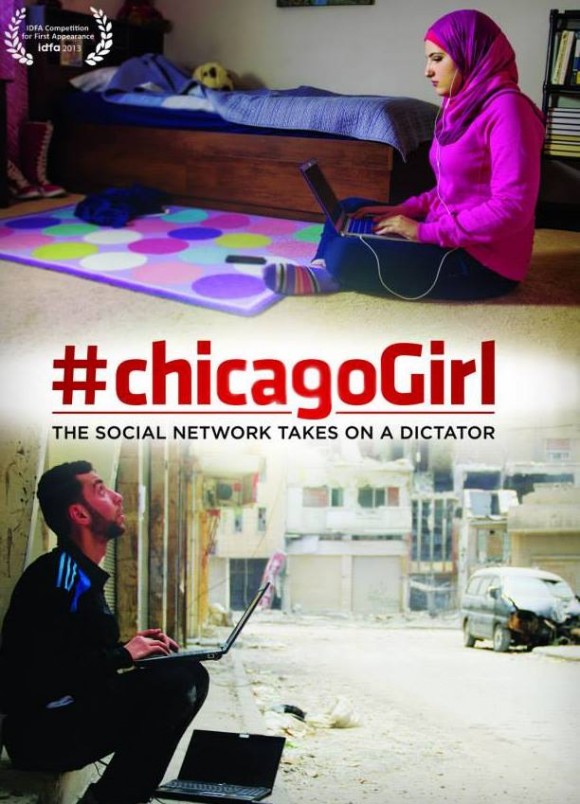 This is a very recommendable documentary about social media citizens journalists and activists in Syria and America, documenting the conflict in Syria (I have only found it with subtitles in Swedish). Although the interviews are a few years old, the content is still very actual.

By sharing videos, photos and stories from inside of Syria on social networks the young people we meet in this documentary are trying to shape the world’s view of the events in a country hard for the traditional media to portrait. Via Twitter, Facebook, Youtube etc. these persons have started their own citizens media agency with the goal to spread words and pictures of what is going on in Syria, this by risking their own lives. An added value to the sharing is of course also that people, in Syria or outside of the country, sympathizing with the activists feel a greater security seeing that more people feel the same way as they do – this is social medias gift of joining people together (Kluitenberg. 2003:2). But this of course requires the recourses to find and see the videos by the likeminded, as well as by global audience.

The geographical distance is no problem – the ubiquity of information is nowadays a fact (Archetti.2011:182). This is one of the many potentials of digital networking and new media: a way of promoting and democratizing knowledge and communication everywhere. But you need to know where to look for it, what is shown to a majority of people is another issue. One can of course question the change a video on youtube makes, if nobody sees it.

The new media allows people with opinions from the varied spectrum of a society to share information and to show their perspective. Eric Kluitenberg means that ”the space of interconnected digital networks should be seen as a new site for political controversy and struggle, where the open zones, the online gathering places, the shared resources should be safeguarded and protected from the powerful forces that threaten them” (2003:1-2). Hence different voices and opinion should be able to claim their space. But even though we can see the possibilities that internet and social media give civic movements, we can still see cases where it did not lead to the goal stated, such as Darfur and Iran (Blogs and bullets, 2010), and in this case Syria. One opinion expressed in the documentary is that today’s technology is fundamental for these movements but what really makes change happens are face to face relations, what happens on the ground.

One of the very interesting parts of this story is how the internet is used as a database for evidence, both by those for and against the regime in Syria. One of the main persons in the movement, Alaa, states that ”It is very important and crucial to have a cameraman that are showing the reality of what the regime is trying to cover up – it is as important as carrying a weapon”. The opportunity to transmit real happenings online carries as huge potential, both for sharing the happenings in the here and now, but also to have evidence for the future.

The documentary show on how the videos are potential evidence for crimes committed. ”When the regime finally falls, these videos will hold them accountable”, Alaa says. With the thousands of cameras in war zones nobody can be sure to not be recorded, and uploaded to youtube. This is something that has not been possible in the past. Also it is a realtime proof of what is going on right now – nobody can deny the conflict. In the beginning of the documentary Alaa describes one of her contacts in Syria, the photographer Bassel, as a person who chose to fight the war with his camera instead of an AK47.

But to have impact the video needs to be seen, and shared, by many people. And even if many people see it – does it have a real impact or does it just add on to the ”like and share”-lifestyle? In a moment of discourage Alaa expresses her concern about how people care more about Arab Idol than the people dying in Syria, or her contact’s videos and photographies. One of her contacts in Syria feels despair for the situation, he gets tired of the small consequences of sharing information online and ends up joining the Free Syrian Army instead, hoping to see real results.

Another way of using this type of activism as evidence is by gaining access to the information on the social networks. This is shown when an activist is arrested – an forced to open his Facebook account where all conversations are saved. Not just the activist arrested is revealed – but his whole network. When the information can be used in many ways – depending on the interest. In Blogs and Bullets it is stated that ”the threat that online evidence may be used to identify and arrest dissidents provides a more direct disincentive to future public online activity” (2010:24). This is a huge threat to the online democracy.

Social networks are a space for contestation between different opinion and can be manipulated. One example form Iran shows how the pro-regime actors organized on the new media ”both to spread disruptive rumors and to communicate pro regime messages”. This confuses, spreads suspicions and might make it more difficult for protesters to use these tools in the future (Blogs and bullets. 2010:24).

This short documentary raises many questions, and I recommend you to watch it.

Cristina Archetti. The Impact of New Media on Diplomatic Practice: An Evolutionary Model of Change, 2011, in The Hague Journal of Diplomacy, 7(2): 181-206.

This entry was posted on Monday, October 20th, 2014 at 8:00 pm and is filed under Accountability, Data and Development, Social Media. You can follow any comments to this entry through the RSS 2.0 feed. Both comments and pings are currently closed.