Data is a big question mark at the moment in development. It seems to be everywhere, lot of things are happening, revolutions are taking place and people are given voices; but the question remains, whether changes happen through social media or traditional development operations. How to measure it? 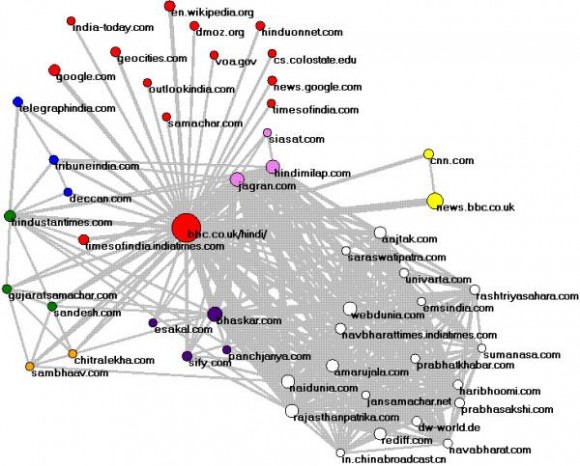 Open University of UK presenting the Digital Diaspora of BBC

Aday et al. (2010:6) claim that the “journalistic accounts usually prefer good stories to complex arguments — and, in particular, heroic accounts of scrappy activists to serious examination of how new media affect political action.” I would have to argue, that it’s not only us journalists, how seem to be in the hype of new media, but rather the development activists themselves. Making a good story requires much more than 140 characters’ messages.

At the same time there are many tools for studying the real dynamics of networks and content. I want to bring up few methods that I find extremely interesting myself.

Those are link analysis, content analysis and meme tracking (ibid. 2010:8-9). “Networks are increasingly recognized as important motivators not only of social phenomena but also of politically consequential behaviors. For instance, terrorist recruitment often draws on preexisting networks of friends and acquaintances.” See for example the ISIS propaganda methods. Link analysis is basically mapping networks of new media and determining who is talking to whom.

For social media content analysis there are several open source software available for collecting RSS or Atom feeds shortly after publication. They can be indexed by words or phrases.

“Meme tracking on the one hand can answer the question of whether ideas move from the blogosphere to the mainstream media or vice versa.” (ibid.)

That is absolutely fascinating! I would say.

But to upset the new media activist: it has been found out by researchers that it’s more often the mainstream media affecting the blogs than vice versa.

In the picture above you can see the visualization of link analysis; the picture is from Open University of UK. It represents ‘digital diasporas‘ at the BBC World Service, but as well it could have been made of the network of terrorist suspects for instance.

Data Revolution from the Bottom Up