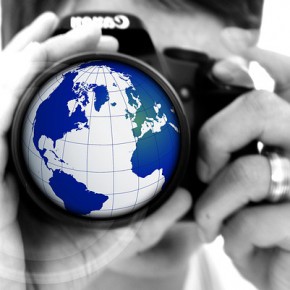 I guess we all commonly have heard about a ‘photo voice’, ‘talking picture’ or visual voices’, a technique of participatory photography that puts the camera in the hands of the people that are encouraged to document and share their own reality through photos.

Inspired by the Freirean technique of mutual dialogue (presented in my previous post) cameras were handed out in 2002 to 11 listeners (7 Women and 4 men) of Taru, an entertainment soap opera radio program in India. The radio itself was a collaborative project of PCI-Media Impact, an international NGO and local organisation such as Janani, and All India Radio.  Clearly the project was not initially initiated by the community itself, but with a support of a non- governmental organisation, the voice was handed over to the community. Listeners in villages -Abirpur, Kamtaul, Madhopur were asked to shed a light on their engagement with the Taru radio series through the language of images. It was interesting to see how the photographs’ narrative created by the participants could flag issues that were addressed in Taru as being important for discussion within the whole community, such as gender inequality, patriarchal norms, family size, reproductive health, caste, denied access of young girls to education, women’s health risk due to poverty in political context and communal harmony.

I will just mention a few photographs to draw a clear picture.

The photo taken by Soni (16 years old) of an old woman, who is trying to cover her head with a sari, presents strong patriarchal connotation. She states ‘that this is a very old woman who always covers her head when any man passes by, like now it was her brother in law and she must show him respect.’

Several pictures captured how young boys and girls are engaged in manual labour. Manjeet’s (19 years old ) photo is described : ‘This boy is planting some seeds. This represents how this boy goes to school as well as works on the farm’. Another photo depicts a young girl with the following statement: ‘The girl is planting potatoes . She is farming’.

Kumkum’s (19 years old) photo of a woman in front of her sewing machines was supported by the call to the community to engage in a self-help and income generating activities. ‘This woman teaches sewing at home and earns money. Every village should have a stitching centre. Women who don’t go to school or are illiterate can do this to stand on their feet. They don’t have to depend on anyone for money or anything else.’

It is obvious that creation of images through the camera lens includes a degree of subjective choice through what must be captured, which images are collected and how they are framed. It is true. But in this case the subjective opinion of community members is rather needed. Their network is born by taking pictures, sharing them and discussing them with community members. The powerful identity of community is created. This network that transfers information can shift power away from the centre to the periphery.  One thing must be kept in mind: for the photography to be come truly participatory is not enough to the photo and share the stories with the researcher, but to share with other community members, citizens and policymakers.

Placing cameras in the hands of people takes us to their daily life experiences which were previously silenced, rejected, overlooked or presented in a stereotypical manner.  They are in power to decide on things that matter to them the most. Not us , citizens of the Global North looking through the prism of our own experiences and necessities deciding on their being and what is the best for them. They know themselves.

The conclusion falls in line with Amartya Sen’s capability approach, which Kleine (2010) rephrases in her article ‘ICT4What?…’ that development is a process of expanding the real freedoms that people enjoy and live a lives that people value. Sen (1999) proposes a freedom of people to participate in development processes to influence decision that affects them. He also argues that functioning of individual relates to the achievement, while capability is the ability to achieve. Capabilities provide space to achieve different combinations to functioning within a freedom to chose desired life (Kleine, 2010). Likewise  community members of Abirpur, Kamtaul, Madhopurchose chose how to use ICT (photography) , chose which images to capture (old women wearing sari, farming girl, playing boys) and chose what is important for them to be achieved, for instance to be healthy, to celebrate also girls birth not only boys, women to take a part in a life community.  Kleine (2010) remarks that funding institutions might set an economic prosperity as a top priority but like in our case community might value gender equality, respect for elderly women, women access to education, caste discrimination more. Participatory way of development although more time consuming and more complicated, as culturally and locally appropriated it reduces risk of failure, and foster a sense of citizenship which is a fundamental drive for the social change . ICT has enormous potential to give individual choices but is determined by dimensions of access, availability, affordability and individual capabilities.

Another participatory photography examples in action: PhotoVoice:Participatory Democracy for Social Change and Life through the Lens