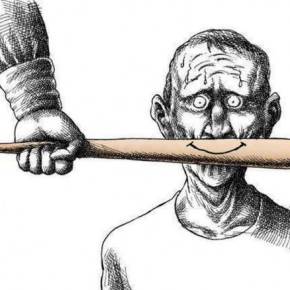 Shirky (2010) stresses how people can make use of Social Media for democratic action.

What happens if such political freedom gained through the Web 2.0 is censored, has been shown in the case of instant messaging being taken down and later the entire mobile Internet being put down by the government for days in the state of Gujarat, India.

The smartphone app Whats App has been reportedly used to organize these riots, which also led to various deaths and the government chose the drastic way of putting a curfew on the entire mobile Internet.

However, taking the entire infrastructure of the mobile Internet down for an entire state, with millions of inhabitants, shows what limitations the political use of social media and democracy can have in the real world context.

It further gives an idea, how vulnerable the infrastructure of the Internet is, when it comes to top-down governance approaches, like taking the Internet off for more than 60 million people in the state of Gujarat this year.

The Internet is vulnerable to the impact of the state, as the example shows, because the state still can intervene. Only in a working democracy, where the infrastructure of the Internet is not over-legislated, the potential of the Internet can be used by the people for democratic action to the fullest potential.