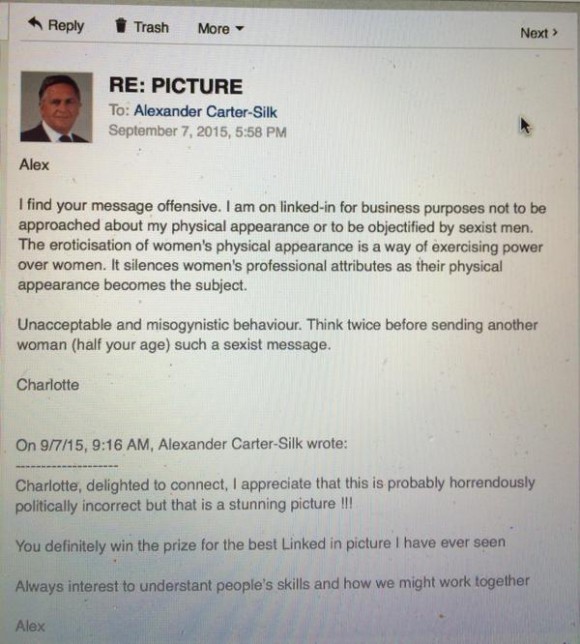 Surely you have read about the recent toxic debate: a high-flying barrister, Charlotte Proudman, accused a solicitor of sexism for complimenting her profile pic on LinkedIn, who then took to Twitter exposing him for his comments. This is when trouble began… The barrister was branded a “feminazi”, she was trolled on social media for “shaming the feminist movement” and was told her career would be ruined for “outing” a colleague.

Feminism as a movement was formed to support women’s rights and to equate said rights with those of men.

The term “feminazi”, on the other hand, is a derogatory term (in more ways than one) referring to feminists that are radical and/or extreme in their views of equality [1].

Interesting about the recent debate was Proudman’s argument that Linkedin, as a professional social network, is an extension of the work place and thus, as put in her own words:

“There is a continuum between receiving a sexist message on LinkedIn and being discriminated against in the workplace.”

Finding the comment to be an example of, “unacceptable and misogynistic behaviour,” Proudman said that commenting on a women’s looks “silences women’s professional attributes as their physical appearance becomes the subject” [2].

However Proudman, amongst others, has been branded a hypocrite because she posted complimentary posts within the informal setting of Facebook.

Bearing all this in mind the following questions emerge:

Could a compliment on a photo be viewed as objectification?

Is it a feminist or “feminazi” approach to chose to expose sexism?

All the above having been said, an even more broader issue has surfaced: that of etiquette among social media websites, where different forms of behaviour are dictated depending on which social network you are using. For Linkedin as a professional social media platform, one is required to have a more formal approach; Facebook on the other hand is more informal and therefore someone can be more casual in their posts and comments. This distinction is important to how we perceive social and online media, and the distinct while simultaneously grey levels it provides us to communicate.

Social media is used to achieve a number of communication goals, and development goals for that matter. Understanding the rules related to social media, especially in this case, can lead to the further development and understanding of equal rights for women in the workplace.

Evermore, if we accept as a given that the Internet is a continuum of our many communities both on and offline, we should all learn how to act accordingly.