Hollaback! and Research about Street Harassment 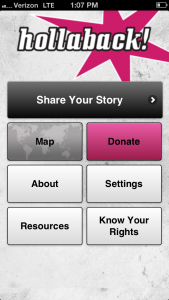 Hollaback! [1] is a movement against sexual street harassment operating on glocal levels: it is spread globally while powered by local activists in urban places. Its mission is to better understand street harassment and to develop innovative strategies to ensure equal access to public spaces.

Hollaback! considers street harassment as one of the most pervasive forms of gender-based violence globally experienced by women and LGBTQI people that is very little legislated against. Via Hollaback!’s new app, everyone is invited to break the silence and share their stories and experiences about when they have been exposed to or when they were bystanders of street harassment. This should raise awareness in the public and shift public opinion. Hollaback! further presents this collected and mapped data to city councils and politicians in order to make them address street harassment.

In 2013, Hollaback! launched the app in New York City in cooperation with the City Council allowing users to report street harassment and bystander intervention with the possibility to also report to the council. When reporting, the data is stored in a government database and Hollaback! is using them to deliver semi-annual reports about issues and trends in New York City. Those reports should advocate for policy interventions related to education and prevention.

Hollaback! is using its online platform to collect data about street harassment that is then also applied for different research projects to delve into this issue, as well as to understand the impact of Hollaback!’s model to address it.

Connected to this case of research based on online data, I want to draw attention to Morrow, Hawkins and Kern’s [2] article where they identify a need of critical discussion about interpreting politics and visibility in online spaces. This further comprises discussions about researcher positionality across virtual and material study sites as well as subjectivity and power in online research ethics.

With new online spaces, boundaries between public and private are blurred and a considerable number of participants can contribute their views, which implies that everyday life can be politicised in completely new ways. However, different perspectives suggest that material social structures, such as racism, patriarchy, or capitalism are embedded or reproduced in those virtual spaces.

This is an issue that the Hollaback! initiative is trying to prevent. The authors specifically state that they do not support prevalent stereotypes about race or class of harassers, which is why they ask contributors to exclude such details from their narratives. But this example illustrates that a big issue in this context of research are the ethical questions for researchers that arise in those online spaces.

One important question is: How can we understand the political dynamics of what and who is visible in online spaces? It is important to not only look at whose voices are becoming public, but whose are not. With the Hollaback! App it is to consider that, first of all, it is the victims’ voices that are made visible and are recorded for further research and statistics.

Obviously, in this context it would be quite hard to get a harasser’s response about motives and intentions of his/her actions (however, this information would be very interesting and could contribute valuable insights for further research). At the same time, the data does not represent all victims of sexual street harassment, for example because the initiative is mainly spread in “developed countries and cities” and narratives of developing countries are rather few.

But even in developed cities not all incidents will be recorded through victims’ reports. Hence, it is a serious challenge for researchers to identify and interpret power structures in online spaces, while trying to take into account forms of exclusion, power and privilege. This gives us a new perspective in the discussion about access and democratic principles in ICT4D and participatory media, namely a deeper consideration of the interpretation side of those aspects.

In the case of the Hollaback! App and research around it that should, among others, deliver results to City Councils and serve as a basis for policy suggestions, it is important to keep such underlying issues about interpretation and ethics in mind and acknowledge arising limitations.