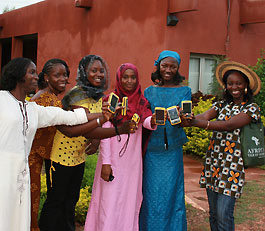 We have read about many ICT4D related projects with the aim to educate and empower women. Often, you can read about such ambitious projects, addressing a wide range of gender issues in a certain development context and intending to solve them all through implementing ICTs. That’s prior to the projects’ realisations.

And then? How many of you have read about a good practice example where the goals of the project have actually been met?

There are a few, but what we read or hear about such projects during or after their realisation is first, significantly less public compared to promising prior project descriptions, and second, that the initial intentions of the project have not been met. Supposedly, there must be some missing part in many ICT4D projects that prevents positive or successful outcomes. I will discuss that here based on arguments of an academic article [1] and in very general terms of ICT, development, gender equality and women’s empowerment.

It seems that the common ICT4D approach is trying to trigger some sort of development by focusing on technology while expecting positive socio-economic outcomes by doing so. But is it enough to solely introduce ICT approaches in some community or society, train some women how to operate them and then expect great success in terms of women’s empowerment, gender equality and an overall development towards a modern society, end of poverty, education, etc.?

In this we could have found the missing part! What about looking at social conditions prior to introducing technology? When you implement new technologies in a system of old social relations, it is quite unlikely that those relations change for the positive.

For example, even if an initiative is aiming to empower women through training and introducing access to ICTs, it might be unlikely that the women can then fully utilise such tools when their lives are still influenced by systematic oppression in society. When a female voice doesn’t have a receiver in the community, due to underlying political and cultural factors, the oppression is unlikely to change just because of the introduction of technology or ICT4D. In a worst case scenario, it could even go as far as to create new and unequal gender relations through the implementation of ICTs.

These social issues could also be reflected in the technology and project design. What if women simply don’t have the resources, such as time, permission of husband, or family obligations, to use the technology? Or if they don’t have an interest in engaging with the platform, for example when designed by men with the intention to address male users?

Rethinking the social aspects in ICT4D could be beneficial for a variety of projects. In practice, this could mean involving women during the project’s early planning stages to learn about their situation, their interests and what would be beneficial for their situation – what we call participatory design. This could further give an idea about what needs to be done to make women’s voices that are commonly oppressed be heard, in order to achieve the project’s goals.