mHealth for Girls: “Hanging” with Choma

CHOMA Magazine is your best friend and big sister – inspiring, supporting and motivating you to make informed positive life choices to live healthily and HIV free [1].

Embracing technology in an effort to reach adolescent and teenage girls, CHOMA Magazine exists exclusively online and on mobile. Meaning hanging in Zulu, CHOMA focusses on young girls and women between the ages of 15 and 25 years, whether they are at school, unemployed or employed, or single, in a relationship, or married.

‘Adolescence is a time when girls’ and boys’ lives begin to differ dramatically in terms of schooling, spatial mobility, domestic responsibilities, and sexual and reproductive health. It is also a time when gender disparities in access to resources and opportunities begin to emerge. In most settings, including in South Africa, girls’ status is inferior to that of boys across almost all domains; girls have less social and economic power, and face disproportionate risks that are rooted in gender inequality.

Evidence shows that the health of adolescents is affected by a variety of social factors at the individual, family, community and national levels [2],[3]. South Africa has one of the world’s highest rates of sexual and gender-based violence (SGBV) against adolescent girls [4], with more than a third of girls experiencing sexual violence before the age of 18 [5].

The timing of transition as adolescent girls enter secondary schooling is particularly precarious; girls’ exposure to physical and emotional threats increases as they age. As girls mature, they become increasingly vulnerable to various threats in their environment that put them at risk for HIV, pregnancy and SGBV. This significantly affects their physical, mental and educational outcomes; ultimately affecting their life trajectories.

These young girls and women bear the brunt of gender-based violence executed in many forms, thereby limiting their ability take their rightful place in South Africa’s workplace and marketplace [6].

Adolescence is developmentally a critical period in which to introduce programmes that explore normative behaviours around gender and power [7],[8] that are youth-friendly, approachable and non-threatening. There is the need to share evidence-based sexuality education that addresses gender and power in effective and fresh ways’ [9].

CHOMA is certainly a strong example of a young-friendly, approachable and fresh initiative to address gender equality and health issues for adolescent girls and young women. In a Choma article about gender equality, the author highlights the importance of freedom of choice for her teen readers:

“Being a certain sex or gender should not dictate the choices you are allowed to make. Just because you are a female, doesn’t mean you are not allowed to pursue things like engineering or play sports such as soccer. In saying that, being male doesn’t mean you are not allowed to be a stay-at-home dad or study to be a nurse. Being able to decide what you want regardless of what gender you are is what gender equality is all about. Gender equality is achieved when men and women, boys and girls, enjoy the same rights and opportunities.”

CHOMA magazine and its accompanying virtual community are accessible through a number of online platforms, and include an Ask Choma page where users can anonymously seek support for any issue they may be facing. Below is a powerful example of a Choma user who is in an abusive relationship and needs help; CHOMA Magazine reminds the user that she has the power to choose a healthy relationship that is happy and safe, and tells her to reach out to friends and family for support. 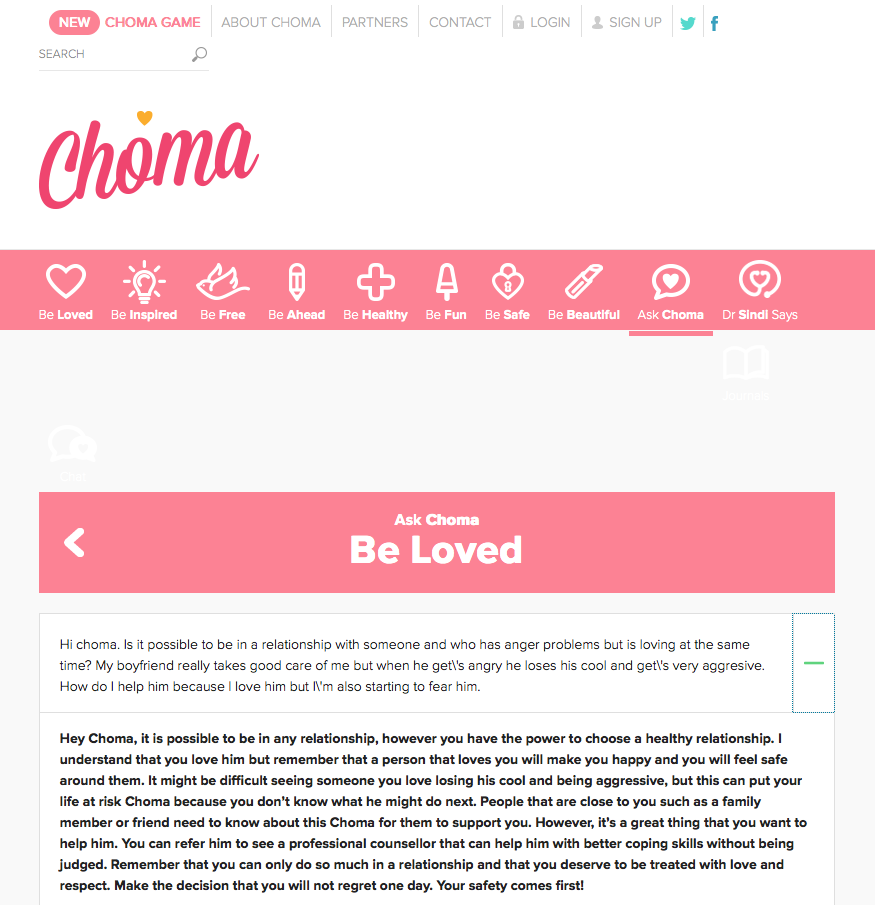 In South Africa, reaching adolescent girls and young women through mobile platforms is a strategic approach. CHOMA reports, “85% of 15–24 year olds have a mobile phone so it is not surprising that South Africans lead as one of the highest users of mobile technology and mobile social networking on the continent. Advances in social media applications, including mobile phone usage and uptake, provide us with an unrivaled opportunity to engage with and invest in the future of young people in South Africa” [6].

CHOMA’s overall mission is to contribute to an HIV free generation, achieved by developing and supporting an active community that’s informed, self-aware, empowered and inspired to take responsibility for their own SRH choices and who are willing and able to influence others positively through the use of social media [10].

When reviewing CHOMA’s Annual Report for the period 1 May 2014 to 30 April 2015 [10], a significant finding that stood out for me was a look at the magazine’s top performing Facebook posts from the channel’s beginning to present. Starting with an entry point post about tips for teenage girls interested in going natural, CHOMA eased their audience to more hard-hitting conversations about the importance of always carrying a condom, and other taboo discussions in South Africa such as sugar daddies and sexually transmitted diseases. 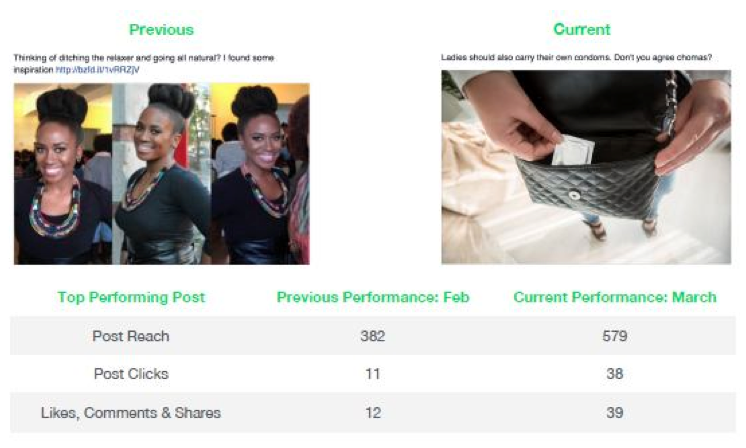 Technical Officer for Research Utilisation at FHI360, Kate Plourde, states “Given the high penetration of mobile phone use among young people, targeting them with mobile health (mHealth) interventions seems like a ‘no-brainer.’ Yet, it has taken some time for the global health and development community to realise that young people represent interested consumers and early adopters of mHealth tools. To date, there are still only a limited number of programmes that directly target youth. […] While the evidence about mHealth is still growing, the success of these youth programmes and the rapid scale which they have achieved demonstrate the potential of mHealth to empower millions of young people with essential health information” [11].

With over 22,000 followers on Facebook, 615 followers on Twitter, and virtual communities on Mobi and Mxit, CHOMA is certainly on its way to becoming the South African girl’s go-to source for relationship, sexual reproductive health and HIV prevention information.