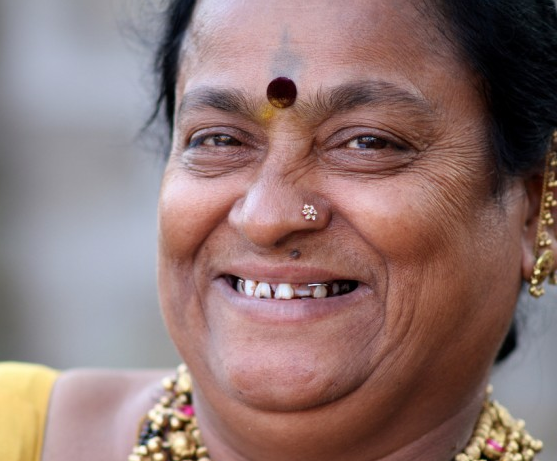 During the Malmo University Communication for Development Voice and Matter Conference that took place from 17-20 September 2014, Andrea Cornwall told the story of the influential sex workers’ collective in India, Veshya Anyay Mukti Parishad (VAMP), the initiative Save Us From Saviours, and their video responses to the sensational and derogatory VICE​ film “Prostitutes of God” in 2010 [1].

A collective of empowered sex workers in a traditionally misogynistic community, the women and men of VAMP promote their life choices as exactly that, choice. Women talk of their ability to buy what they want, choose their clients, demand condom usage, and enjoying a free and independent lifestyle. While I only know of their life experiences through their videos, the self-assurance and power they display calls up Amartya Sen’s capabilities approach (1980, 1984, 1993, 1999) and concept that “development is about the freedom of choice in the personal, the social, the economic and the political sphere” [2].

In the interest of sharing their own story, VAMP allowed VICE journalist Sarah Harris into the community. Harris’s patronising approach came as a shock and betrayal to the participants. The video was just another extension of the development narrative, describing a rural and “backwards” village, othering the Devadasi women, and placing Harris – and VICE – above their subjects through word choice, framing and the absence of journalism ethics (such as providing consent forms and concealing identities of HIV positive people and minors). The video was produced and edited in Harris’s own self-interest.

In response to the VICE film, VAMP and the community advocacy organisation Sangram sent an open letter to VICE disputing aspects of the film and recorded the below video directed to Harris, calling her out on unethical practices. The main disputed points in the film were [3]:

Sangram Founder and Secretary General Meena Seshu introduces Save us from Saviours this way, “Countering the distorted perspective in the film, women from VAMP present their incisive views about sex work; religion and faith; livelihoods; issues of consent; ethics and cross-cultural sensitivities while making documentary films” [4].

Harris apparently made a few minor changes to the film but has not responded in further detail to the collective, only saying this in a live chat hosted by VICE after the film’s release [5]: 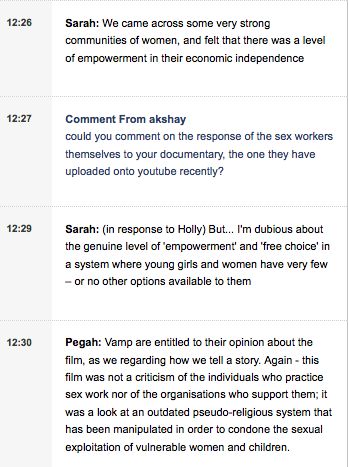 Sangram also launched their own community production film unit, Sangli Talkies, and Seshu shares why they have undertaken this powerful initiative on her YouTube page [4]:

“In the age of the internet, women in countries far away who used to be the objects of white people’s gaze with no right of reply now have access to the representations that are made of them, and the technological means to answer back. A naive westerner may seize the headlines, but there’s now scope for there to be a debate and to bring those who in the past would have remained voiceless victims into that debate to represent themselves.It is a great opportunity to put the record straight.”

Seshu herself says that along the way, she has learnt a lot from the women she works with, “The one thing I’ve always believed in is that we don’t listen to women enough, even in the feminist movement. With sex workers, we don’t listen to them at all” [6].

An Open Society Foundation profile on Seshu states, “For many, prostitution is synonymous with exploitation, existing for the benefit of men so that they can have a better sexual life. However, by listening to sex workers themselves, Seshu has come to view this interpretation as flawed. In reality, ‘it’s for these women to make money.’ It is a distinction that Seshu claims is ‘very clear to the women'” [6].

“Nothing about us without us” is one of VAMP’s mottos, and the about page of their website succinctly says, “Save us from Saviours offers a powerful message to the development sector. A testament to the power of collective action the film is also a reminder that rights and recognition, rather than rescue and rehabilitation, offer a far more lasting pathway to empowerment and equity” [7].

The group, with Sangram’s Sangli Talkies, has created five films since the project began in 2010, each one shedding light an aspect of life in their community.

The film Save us from Saviours, a collaboration between VAMP, Sangli Talkies, Andrea Cornwall, Pathways of Women’s Empowerment, filmmaker Kat Mansoor and Animal Monday, is a perfect example of community-driven media, created in a participatory way, to dispel rumours and share information about VAMP and the people who live and work with them.

In closing, as Cornwall said in her Voice and Matter talk, “Be brave! Be real!” [1].

* 10 October 2015 * As part of the assignment, I visit the blogs of other NMICT4D groups. Today, I came across a similar post from Group 1’s ICT4D in India blog “Sex workers are not always victims”, and submitted this comment:

“Good article about VAMP and the Save us from Saviours initiative, such a good example of ICT4D and participatory/community-driven media. The work VAMP, Sangram and their film unit Sangli Talkies are doing, is inspiring and the power of their voices is clear. It reminds me of the short essay by Alan O’Conner about the Bolivian miners and their important role in society. “Through their radio stations, the miners’ organisations have played an important role in shaping the political position of the Bolivian union movement” (O’Connor 1990, p107). We can easily see the power of the VAMP collective, the way they have amplified their voices, and “the role of communication technology in representing non-dominant viewpoints and helping create a politically conscious and active community” (O’Connor 1990, p108-109) [in the Save us from Saviours initiative].