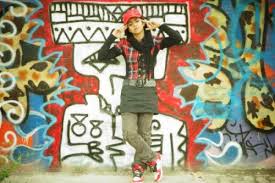 Here, another post about women shoutingback through music. Sonita is an 18 year old female rapper from Afghanistan. With her music she is fighting against child marriage, something that she managed to escape from.

The first time Sonita was supposed to get married when she was 10 but the marriage did not go through. She fled with her family from the war in Afghanistan to Teheran, Iran, where she was not allowed to attend school because she was a refugee and had no ID. At an NGO for undocumented children she learned how to read and write. Thanks to those skills she discovered poetry and appreciated this way of telling her own story.

She started writing songs and with the help of some producers in Iran- it is illegal for women to sing except with special permission from the government- she started recording her work. She recorded her song “Brides for Sale” and uploaded the video on youtube. It starts with the lyrics

“Let me whisper, so no one hears that I speak of selling girls. My voice shouldn’t be heard since it’s against Sharia. Women must remain silent. This is our tradition.”

But then she continues:

“I scream to make up for a women’s lifetime silence. I scream on behalf of the deep wounds on my body.”

Her music became more and more popular and finally, she was awarded a full scholarship to study music in the US which was also her escape from being sold to a man. Besides her music studies she is campaigning against child marriage, as you can see in this interview with “Women in the World”.

Sonita’s story is another inspiring example of a strong girl shouting back- in this case rapping back- for gender equality. Her story also shows us that popular culture is providing cover for the political use of media[2] and hopefully this will have an impact on the current situation of girls in Afghanistan.