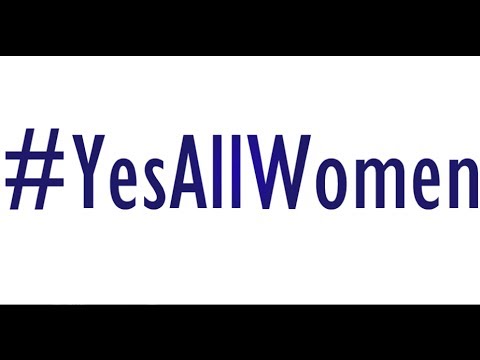 Elliot Toger made headlines back in May 2014 with the University of California, Santa Barbara 2014 killings. There he killed six people, injured 13 others and committed suicide.

The police investigation revealed him as an extreme misogynist, inspired to kill women because they had no sexual interest in him. This shocking, yet extreme case, alarmed women across the globe; they took to Twitter and the hashtag #YesAllWomen was born, enabling them to use it on social media to share their stories and experiences of male harassment.

It was a moving way for women from around the world to share their experience of how all women have had to deal with male entitlement one way or the other, some time during their lives. The hashtag rapidly spread around the world, and has since been tweeted more than 1.2 million times. 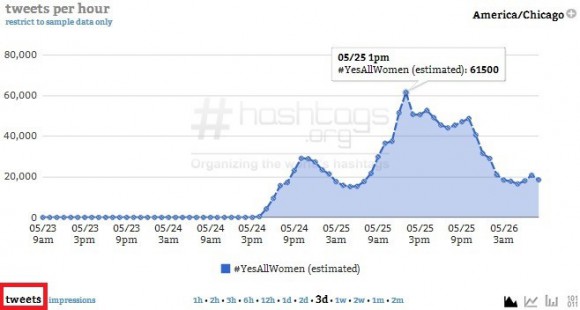 “Twitter created an animated heatmap of the #YesAllWomen hashtag, showing how it progressed since its genesis on May 24 and spread throughout the weekend. The hashtag had worldwide reach, with most of the tweets concentrated in the U.S. and U.K., but saw activity in many other countries, including Pakistan, Indonesia and Qatar” [1]. According to M. Skoric, “social media so far have proven effective for civic exposure but not as effective for political issues.”

Morrow states that “online spaces present rich and complicated environments for feminist research, as they blur the boundaries between public and private, have the potential to politicise everyday life in new ways, and can involve a wide array of authors self-publishing their ideas and experiences” [2].

However, the internet is an integral part of society and thus “mirrors its structures (and reproduces at times) problematic social frameworks, including capitalism, patriarchy, and racism, among others” [2]. 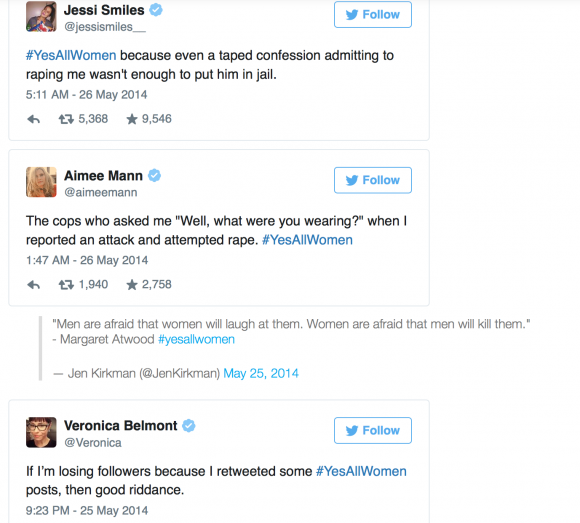 Herring takes the argument even further stating that “the Internet does not foster democracy since sexism continues there, […] The disadvantages suffered by women in society carries over into “the virtual communities” on the Internet: women are underrepresented in these electronic places and they are subject to various forms of harassment and sexual abuse. The fact that sexual identities are self-designated does not in itself eliminate the annoyances and the hurts of patriarchy.”

Rita Felski argues that “the concept of the public sphere must build on the “experience of political protest and must acknowledge and amplify the multiplicity of the subject (in the sense of post structuralism) and must account for gender differences (in the sense of feminism).” She writes, “An appeal to a shared experience of oppression provides the starting point from which women as a group can open upon the problematic of gender, at the same time as this notion of gendered community contains a strongly Utopian dimension….” [3].

Either way, whether we choose to “follow” or “unfollow” a friend, an idea, a hashtag, “the emergence of new technologies has formed a new arena for public debate” (UNESCO, 2012) and as Felski sees it, this new emerging “public sphere is central to feminist politics” [3].