The (Questionable) 15 Minutes of Fame 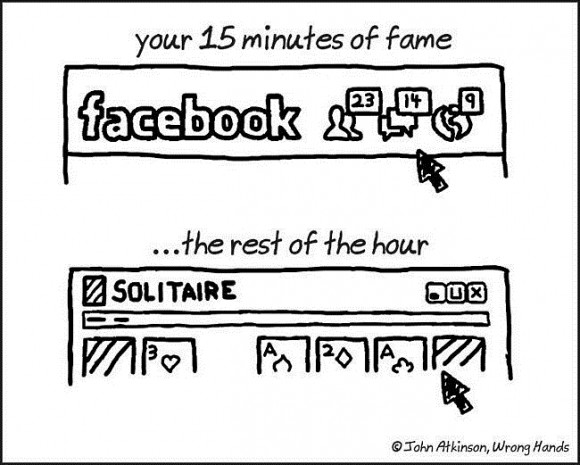 “In the future, everyone will be world-famous for 15 minutes.” – Andy Warhol

I am not quite sure if Warhol understood the impact this statement would have in the generations to come, when he spurted it out back in the late 1960s; and now in the age of online and social media it is more relevant than ever.

David Weinberg adapted Warhol’s expression into the Internet age, stating: “On the Internet everyone is famous to 15 people” [1].

With the boom of social media networks and blogs, and their easily accessible platforms, we have seen bountiful numbers of people emerging in to the “blogosphere” detailing their interests from DIY projects, to dense discourse analysis on environmental and political issues, and in turn becoming “microcelebs” [2].

If you are able to filter through the vastness of blogs, it is a valuable tool, providing space for “matters that are important in society and perhaps are given too little attention” [1] such as ICT4D, feminism, work related issues and so on.

But who is really the audience here?

Blogging, as stated by Rettberg is a “dense network of small audiences by many producers” [1], which generally means anyone with basic computer skills, an internet connection and an account on a blogging platform can become an author and publisher, where he/she can voice their opinions.

However, blogging is “more than words and images” [1] and also has to do, to a greater extent in my opinion, to links, connections, layouts, frequencies and metrics.

If these do not exist, then whom is the blogger reaching?

The disappearance of blog indexes and their replacement by social media platforms, only but confirms the fact that blogs “form the backbone of social media” and “exist primarily as networks for sharing ideas, trends and information” [1].

It is not only your friends and followers who are “following” you: “the most valuable information is that which is implied and not posted deliberately” [1].

We “deliberately” like or comment a friends post, seek out organisational tutorials and so on; however this activity as such on the web defines patterns that are collected and refined to serve us with new similar information, “mining the network of links to provide us with good search information” [1].

On the other hand, the “internet is also a commodity and a capitalist market place” that profits from this information [4].

As Tim O’Reilly states, “using this data is harnessing collective intelligence” [1]. Because it isn’t about what we post on the Internet, it is the patterns that are traced back to our activity on it: the books we buy, the hotels we search, the posts we liked, etc.

Thus, despite all its advantages, online and social media undoubtedly has a dark side to it. According to EPIC 2014, the 8-minute Flash video on creation of the mythic Evolving Personal Information Construct by Robin Sloan and Matt Thompson, where the history of online and social media briefly unfolds, it describes the “sprawling chaotic mediascape”, that is created from the “contribution of everyone” [1], but at the same time the cost for this “customisation” is the loss in privacy.

Once you log on to the computer Google knows your location, what you have purchased, who you have chatted with and so on, or simply “What goes on the net stays on the net” [5]. There are many examples of people who have been harmed from information posted on the net, because it has “a sense of persistence” and an ability to “re-find almost anything, even things that would have previously been forgotten” [1].

Rettberg fittingly refers to the dichotomous nature of online and social media “Blogs and participatory media have a liberating potential but also a dangerous potential for increased surveillance and control. Blogs are tools, like knives, that can used for good and for evil” [1].