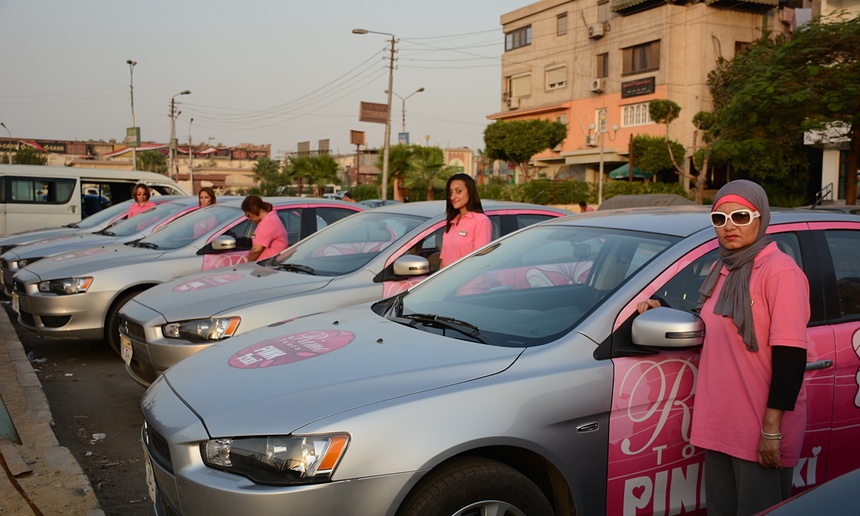 Gender binaries are ingrained from the moment people are born: blue is for boys and pink for girls.

Therefore, segregation usually starts from the moment that mum starts decorating the nursery as well.

Then, there are girls’ films – boys’ films, girls’ toys – boys’ toys, and the list goes on and on. Society imposes this segregation in more ways than we are willing to admit.

So, when I read this article on how segregation can help Egypt overcome its sexual harassment problem, it didn’t strike me as odd.

Sexual harassment has been on the rise in Egypt since the Arab Spring. According to UN reports approx. 99.3% of women in Egypt are victims of sexual assaults [1]. 82.6% of the respondents to the same UN survey claimed they feared leaving their homes alone.

An initiative to help tackle the issue is the creation of a taxi service exclusively for women and handled by women, called Pink Taxi.

Fawzi hopes to eliminate some of the risks for women and families travelling in public: Pink Taxi is operated exclusively by female drivers, and must be ordered in advance. Customers are required to send in a scan of their National ID “for the safety of the driver,” Fawzi adds.

The company’s vehicles also come with an internal camera and a microphone to record every ride – and a so-called “kill” button to remotely stop the car if needed [1].

So does segregation help the deeper issues? The question is no.

If men do not stop seeing a woman walking down the street as easy prey, or “begging for it” simply because she is breathing, sexual annoyances will not stop any time soon.

Azza Kamel, a women’s rights activist and head of the Appropriate Communication Techniques Center (ACT) claims that Pink Taxi “encourages segregation of the sexes, and this undermines the cause of fighting against harassment. Women have the right to feel safe while men are around. It is a society made up of men and women, and they have to coexist safely.”

Kamel is concerned that projects like Pink Taxi endorse segregation, undermining calls for gender equality, and avoiding actual solutions to the problem. There is also the argument that “women are returning to the era of the harem,” as stated by Intesar al-Saeid, a lawyer and Director of the Cairo Centre for Development and Human Rights. al-Saeid also claims that initiatives like Pink Taxi expose and widen the economic and class gaps.

“The Pink Taxi is only for women who can afford taking taxis, and ignores other women who use public transportation,” she said, adding that all such projects are useless if the law is not strictly applied to sexual offenders, and if no effort is made to change the culture of Egyptian society.

However, a hybrid approach could be a valid approach: women could embrace the benefits of this segregation and at the same time, continue to pursue gender equality and stricter laws for sexual offences [2].

Another argument is that women seem to be making headlines in the region mainly because of the sexual assaults they sustain, and not for their activism. Women played a prominent role during the Arab Spring protests, however, this has been shadowed by numerous violent assaults against them. Even foreign journalists have not been immune; remember the case of SA CBS TV reporter Lara Logan who was assaulted by 300 men in Tahir Square.

According to feminist theory, “any narrative of women’s experience in conflict is necessarily partial, because women play a multiplicity of roles, as peace activists, as domestic or economy-saving labor, as logistical and health care supporters, and or as active participants in agitating for regime change.” In the Arab Spring, women were protesters, but they were also martyrs, political candidates, and bloggers serving the cause of seeking democratic change [3].

But they were “(…) not only proponents of the Arab Spring but also its opponents and its civilian collateral damage” [4]. For example, Nadje Al-Ali (2012) suggests that “women participated side by side with men in protests across the region” but were also victims of their brutality.

Whichever side of the debate you choose to support, one thing is certain: Pink Taxi is a positive step towards women feeling safer in public. And, that’s a start.