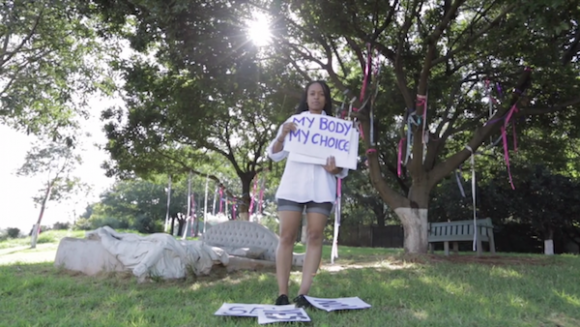 The South African actress and filmmaker Mmabatho Montsho initiated the YouTube series “Women on Sex”. The videos present various voices of South African women discussing female sexuality in a way it has never been done before in this local context.

The women in “Women on Sex” represent mainstream and marginalised voices in one space. They are from different parts of South Africa, with different demographics and sexualities. They discuss issues ranging from sexual violence, unwanted pregnancies, HIV and AIDS, and virginity testing, to sex education and sexual liberation. In the series, it becomes clear that women are facing the same challenges, no matter who they are and where they are from in the country.

By doing so, Mmabatho Monthso wants to fill the gap in general public discourses of acknowledging black women as critical thinking human beings. She wants to dismantle common stereotypes and decolonise stories of black women as “helpless victims”.

“You cannot talk honestly about sex without talking about the law, power relations, gender inequality, history, the economy, crime – you name it. It is connected to our liberation and we have to review the relationship we have with it.”

“We live in an anti-woman, sexually oppressive society and that has to change. When we talk openly about sex, we begin to reevaluate our relationship with it and, as women, we begin to own it.”

“When black women are given a platform to talk about sex, it’s usually as helpless, injured beings. We need to challenge that tradition and be on record talking about sex, not as victims, but as smart, articulate people who critique and have a position on the topic.”

So far, social media has been the only platform where black women could express themselves this freely and strongly. It is a big step further to film and broadcast their voices. The reason for why Mmabatho Montsho chose YouTube as the broadcasting tool for the videos is also connected to media censorship and freedom of speech: online broadcasting enables pushing certain sensitive boundaries that you are not allowed to talk about on television. TV is still a male-dominated space where there is no room for women-sensitive issues, in South Africa in particular. Platforms such as YouTube give independence to directors and allow for experimentation to test voice and contents with a global audience. The expectations online are different as are the rewards.

However, Montsho says that South Africa is still primarily a TV-watching audience and she hopes to find a comfortable compromise to serve that audience. This way the series could reach a greater audience and have more impact on the current situation.

If you are interested to watch more episodes of “Women on Sex”, you can find the link to the YouTube channel here.

Read more about the series online: