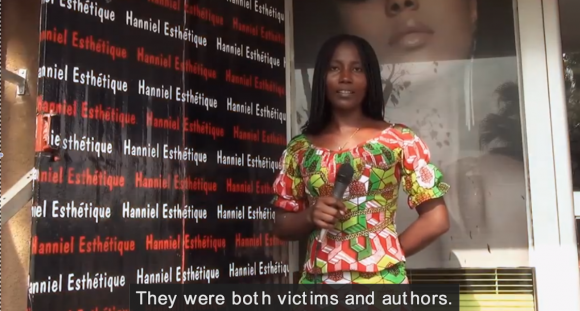 The extract of the interview above comes from the participatory video Justice Transitionelle  made by a group of young people in Abidjan, Ivory Coast. It is a project supported by InsightShare, an NGO from Oxford that has been working with participatory video since 1999. InsightShare has projects all over the world, involving different communities that deal with their local issues. In they Ivory Coast they also supported the project Clubs Messager de Paix which aims at promoting peace and non-violent behavior in schools.

Both projects involve young people who have engaged and suffered from violence of the civil war in the Ivory Coast. By creating their own video, telling their personal story and staging different situations they want to make a contribution to a peaceful living together.

Can participatory video be a strategy to achieve reconciliation in a country like the Ivory Coast?

From personal experience I know that making a video is a fun activity which inspires and stimulates one’s creativity and self-esteem. Besides it requires a lot of collaboration and teamwork to act, film, assure a good sound quality and decide which material is useful and which is not. According to Harris “the process of production and content development become a dynamic site for community building and reconciliation” (Harris 2008, 161f.).

Besides, it is a way to communicate. In Justice Transitionelle and Clubs Messager de Paix the young people share their feelings and personal faits, explaining how and why they became violent in the first place. This is meant to create understanding and reflection. They also tell about their change, about how the project has helped them to improve as a person and to become non-violent. This is meant to have a role-model effect on other young people who might have had similar experiences. Findings of an analysis of the project Clubs Messager de Paix say: “The participatory activity of planning and filming a video, and watching themselves in screen, helped the participants to affirm this position [the transformation to a non-violent person] and to connect to the group through common experiences.” (Flower 2015: 15).

Justice Transitionelle and Club Messager de Paix show the positive impact in their local settings and communities of making a participatory video. Baú says about Communication for Social Change initiatives: “When these activities take place where hostility reigns, video can be a powerful tool for sharing stories for conflict transformation and the restoration of social fabric that conflict has destroyed. Grief, isolation and victimhood are all elements that video stories can address and the wider community can benefit through public screenings” (Baú, 2014: 7).

However, Justice Transitionelle and Club Messager de Paix only show the most successful examples of transformation. We only know 10% the participant’s stories. Students selected the stories of which they think that they influence or motivate better behavior in others. I wonder how the impact on what Baú calls the “wider community” really looks like. What effect have the videos on a person who did not actively engage in the project? A more comprehensive evaluation of the project and an audience study should be conducted to answer these questions.

Baú, Valentina (2014): Telling stories of war through the screen. Participatory video approaches and practices for peace in conflict-affected contexts, http://cco.regener-online.de/2014_1/pdf/ba%C3%BA.pdf.