Wael Ghonim, face of the Arab Spring in 2010, founded the project Parlio in Silicon Valley, offering an alternative information portal to Facebook, which meanwhile is dominated by pussy-cat videos and selfies-in-bathroom-posts. Ghonim, who experienced hate and defamation through the internet, decided to create this platform for a civilized dialogue and profound exchange. But why did Facebook fail to be a democratic tool and broad information resource? 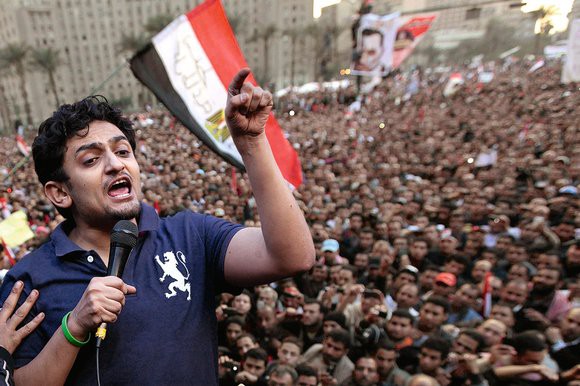 I remember that until 2010 Facebook and Twitter were glorified to be the new revolutionary social media tools. And the word revolutionary must be interpreted literally. They were expected to transform political systems because of their contribution to the liberty of speech, the acquisition of alternative information and their power to reach a large portion of the world. However, five years after the beginning of the Arab Spring we rather talk of a „Net Delusion“ than a Net Revolution (Hofheinz 2011: 28).

My fellow student Julien Figueras, co-author of the blog Beauty is in the digital street, comments on the lecture of Marco Skoric, held this month at Malmö University, who presented the impact of Facebook on our societies. Julien writes in his blog:

However, visualising it on a simple slideshow made me realise how limited our seemingly free speech can turn when applying an algorithm. […] Facebook might look like a public place, you can login and do a lot of stuff as you would do in public spaces, but you are not the owner of anything that’s around you, and you don’t really get to decide what you have at sight.

In this sense Facebook is criticized by many scholars. The information we access on Facebook depend on what our friends share and if our friends are like-minded or have cross-cutting political opinions (Bakshy et al 2015: 1130). David Lazer demands that we need to „create a new field around the social algorithm, which examines the interplay of social and computational code“ (Lazer 2015: 1090).

When we now apply this knowledge to reconciliation processes, it becomes obvious that Facebook is no tool that can be used for peace-making. In order to reconcile, people need to develop mutual understanding as well as tolerance and they have to to engage in critical reflexion and dialogue with the opposed group. But this is a process that cannot be achieved if you are always exposed to to the same strong opinions. During the „European refugees crisis“ of 2015, Facebook has sharply been criticized by politicians to enforce strong opinions and encourage racism, for example, through allowing hate-messages and not offering a dislike-button in order to show openly when you disagree with a message.

On Parlio you can choose topics you are interested in, for example Politics, Social Issues, Psychology, Public Policy or Business. The discussions of the categories you choose appear in your newsfeed. (Nonetheless, nothing is known about the order of appearance or algorithm.) You also have the possibility to engage in critical debates with scientists or politicians to discuss the topics you are interested in. You can always stay updated by saving these discussions in a bookmark. The rest is pretty much the same as on Facebook: Users have the option to „upvote“ articles they like, comment or share them but you cannot „disagree“ for example. 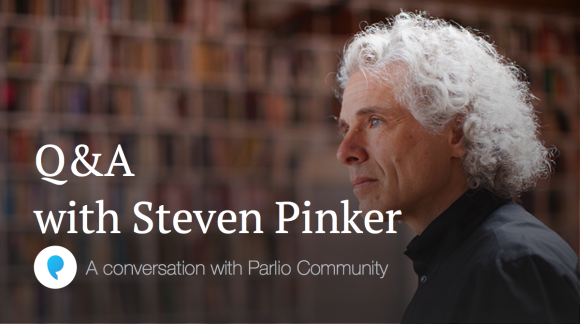 Parlio – Question and Answers with scholars

Even though, in my opinion Parlio is a more democratic tool than Facebook because it is designed to open up controversial discussions and not just posting quick and imprudent statements, which are only meant to enforce conflicts. „A community for the curious, civil and open-minded“, titles Parlio’s slogan, which implies a wish for more dialogue and less violence.

Best et al. argue that the practice of dialogue and communication are important to deal with conflict. According to them „prejudice and conflict can be reduced through „good contact“ which is regular, balanced, and equal“ (Best et al 2011: 235). Parlio pretends to be a social media where such a regular, balanced and equal discussion can take place. Parlio is for free so that everybody who is interested can join the community, disregarding his/her financial status.

The idea is great. However, Parlio’s community is very elitist. The exchange takes place among people who are interested in social and political issues and who speak English. Besides, next to your picture and your name, Parlio presents your work place or University. So, you get „tagged“ from the beginning with a social status. In my opinion that hinders the „exchange among equals“ since people are aware of whether you have a university degree or a good workplace, which will automatically introduce a hierarchy in the discussion. People without a job or university degree will feel excluded. Although Parlio is meant to be participatory, the Question and Answer session with authorities or experts have a contrary effect. Parlio has the values to become a tool for social reconciliation but it’s implementation is very idealistic. 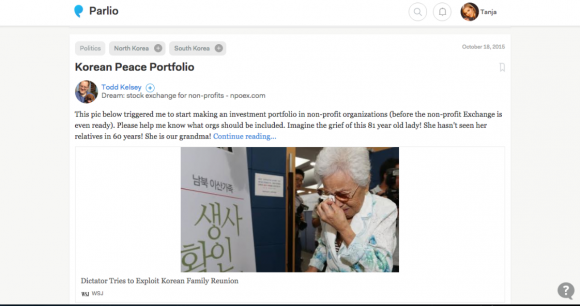 Up to now, social media has not been able to become a tool for reconciliation at all. Despite the big portion of NGOs and peace-groups that promote their work on Facebook, their influence has remained small. If their news don’t appear in peoples’ newsfeeds they will never even know about their existence. Parlio is a promising idea, but unless it does not change its design it will stay within a small circle and will not be able to engage the populace.