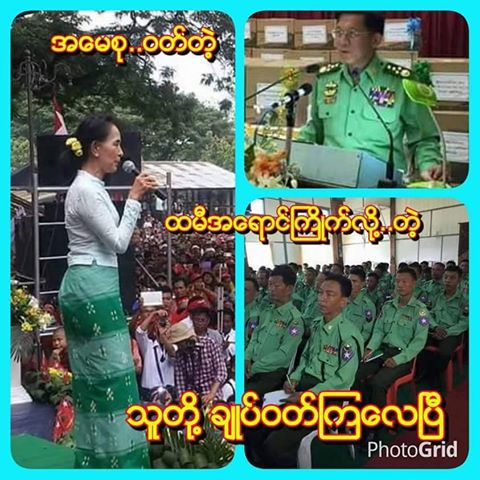 A young opposition activist in Burma (also known as Myanmar) has recently been arrested and charged with “defamation” after she made a satirical post on Facebook mocking the country’s new military uniforms. The post by activist Chaw Sandi Tun compared the uniforms to a traditional longyi (sarong) of a similar colour worn by Aung San Suu Kyi, the leader of the National League for Democracy party. The alleged defamation exists based on the fact that in Burma it is considered an insult to imply that a man would wear a woman’s sarong.

In February of this year, authorities in northern Burma arrested a freelance photographer after he posted a photo on Facebook allegedly mocking officials.

According to article 34(d) of Burma’s Electronic Transactions Law, anyone accused of the “creating, modifying or altering of information or distributing of information created,
modified or altered by electronic technology to be detrimental to the interest of or to
lower the dignity of any organization or any person” “shall, on conviction be punished with imprisonment for a term which may extend to 5 years or with fine or with both”.

Two important things regarding new media and internet communications can be considered here. Firstly, those in Burma with access to the internet also have access to information regarding the laws under which they are ruled, and can therefore become more aware of their legal rights, and secondly, new media and social networking don’t always provide the appropriate podium on which to stand and speak out.

In a free country, it could be argued that social networking sites like Facebook are an outlet for free thinkers and free speakers to say what’s on their minds, and to
ridicule and satirise things they don’t agree with, usually finding comfort in the knowledge that they have been heard, and need not fear penalisation for their words
(except in extreme cases). This kind of freedom, however, is less likely to exist in authoritarian states like Burma. In effect, it’s almost the opposite; governments
now have new ways of tracking and finding dissidents, perhaps far more easily than in the past, and, in Burma’s case with new laws related to electronic communication,
have created news reasons to do so.

The idea that new and social media are powerful tools for the propagation of democracy and human rights is even being advocated by certain government officials. US
Secretary of State Hillary Clinton, in a speech delivered at the Newseum in Washington, D.C. in Januray 2010, stated that:

“[The United States* needs to] put these tools in the hands of people around the world who will use them to advance democracy and human rights, fight climate change
and epidemics, build global support for President Obama’s goal of a world without nuclear weapons, and encourage sustainable economic development”.

Although this way of thinking, i.e. new and social media are nothing but windfall, might seem reasonable, especially from a Western point of view, Clinton herself followed
by saying that “we must also recognize that these technologies are not an unmitigated blessing. These tools are also being exploited to undermine human progress and
political rights,” as we can see in the case of Chaw Sandi Tun in Burma.

Aday et al, in their 2010 report BLOGS AND BULLETS: new media in contentious politics, delve into this issue further, emphasising how for all the good these new media do, there are ways in which they can be exploited. Further, they pose the following questions:

The report goes beyond the binary “the public use new media for good, governments use it for bad” idea (for example, stating how these media might exacerbate certain
tensions), and emphasises how reliable data related to the efficacy of new media in contentious politics is hard to come by, and often anecdotal and based on intuition.
The report concludes by suggesting techniques that analysts of new media should remain open-minded about the technologies’ strengths and weaknesses, and that they:

– Be sceptical of sweeping claims about the democratising power of new media;
– Acknowledge the good and bad effects of new media;
– Beware of backlash; and,
– Do not mistake information for influence.

Despite being designed to connect people in a positive way, social media is in fact a digital double-edged sword.

* Side note: It’s interesting how the US has taken on the burden of supplying new media and means of access to the world. This raises the question of why it should be the US to undertake such a task and not any other nation or organisation, particularly within the countries themselves which are the targets of such US aid.