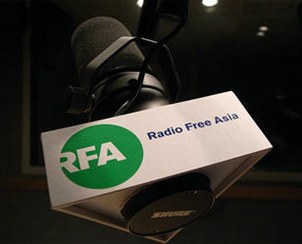 “RFA is a private, nonprofit corporation that broadcasts news and information to listeners in Asian countries where full, accurate, and timely news reports are unavailable”.

Radio Free Asia (RFA) was founded on March the 12th, 1996, as a private non-profit corporation, and acts as a substitute for indigenous free media, concentrating on  covering events occurring in and/or affecting the countries to which it broadcasts. Its headquarters are located in Washington DC, and it maintains offices in Hong Kong, Taipei, Bangkok, Seoul, and Phnom Penh, as well as stringer offices in Dharamsala and Ankara.

RFA uses various forms of modern media to broadcast its coverage to the countries concerned and to the world, including its website, social media such as Facebook and Twitter, video-sharing sites such as YouTube, podcasts, RSS feeds, mobile apps, and radio.

RFA is an example of how people in the developing world (and elsewhere) can harness the power of new media and the internet and give voices to those who have none, and to get information to people in places where knowledge and information is restricted.

There are, however, problems to be aware of when consuming this kind of media, as there are when such information is presented by other media outlets, particularly with regards to political ideology. To begin with, RFA is supported by the US government. Non-profit organisations often have issues with supporters and donors directing their operations to suit particular political intentions, and the US is well-known for getting involved closely in affairs far from its territories.

Assuming the US government has no say in RFA’s operations, there are still issues to look out for. Although RFA claims not to “express editorial opinions but provides news, analysis, commentary, and cultural programming in the languages of the country of broadcast,” there is still the potential for the organisation to be guided by its members’ previous experiences, knowledge, and biases, particularly with the use of language.

‘Language’ in this instance means two things: the languages chosen, and specific words used within a language. Here, I would like to talk about both, but first, and particularly, the languages chosen. As I know very little about most of the languages in which the website is offered, I will focus on its use of Mandarin. The most notable choice RFA have made in this regard is to utilise Simplified characters, as opposed to Traditional characters, in their reportage and website content. Although in the People’s Republic of China Simplified characters are the standard, meaning RFA are sticking to their claim of providing information “in languages of the country of broadcast,” the fact that they offer no Traditional alternative (for those living in, for example, Taiwan, parts of Malaysia, and other places around the world where Mandarin is spoken and Traditional characters are used) when their media is frequently restricted in China could be construed as a politically motivated or biased choice. The same goes for their use of Cantonese, which they offer in Simplified characters, when in Hong Kong and Macau Traditional characters are used. Although there is a Traditional Cantonese version of the RFA website, there appears to be no navigational link to it on the site, leaving it to the reader to manually amend the web address from:

Second, although in English RFA refer to the language as Mandarin, in Simplified Mandarin they refer to it as “普通话 (Pǔtōnghuà)” meaning “ordinary speech”. This is already a contested name in some areas, within China and without, as it implies other dialects and languages spoken within China are not ordinary, and non-Beijing (the place with which Pǔtōnghuà is usually associated) Mandarin is not common or correct (bearing in mind that 400 million people in China do not speak Mandarin).

The next issue, which certainly expresses political bias, is the inclusion of a section on the site (easily searchable on the Mandarin version) about Hong Kong and Taiwan. Although Hong Kong is officially a part of the People’s Republic of China and governed as such, Taiwan is not. Inclusion of Taiwan into such a category is blatant bias, and even more questions are raised when you consider that “[a]ll broadcasts are solely in local language(s) and dialects” of the countries in which they broadcast. So, if RFA consider Hong Kong and Taiwan parts of China, and they have offices in Hong Kong and Taiwan, why do they not (as I stated earlier) offer a version of their website in Traditional Mandarin, and make navigating to their Traditional Cantonese site difficult?

These (perhaps minor, yet highly contentious) issues, might be related to the fact that RFA’s president since 2005, Libby Liu, is Chinese. On the other hand, particularly with the Traditional Cantonese issue, and considering that the target audience who read Simplified versions of these languages is undeniably huge, perhaps it’s all simply down to oversight on the part of RFA.

Nonetheless, perhaps Radio Free Asia should be known instead as “Radio Not So Free Asia”.