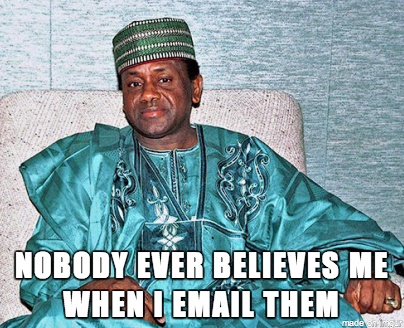 DEAR BENEFICIARY,
I AM REV,DR.JOHN H.WILLIAMS,THE AUDITOR GENERAL OF THE FEDERAL REPUBLIC OF NIGERIA AND I WISH TO KNOW IF YOU HAVE RECEIVED THE SCAN COPY OF YOUR CERTIFIED BANK DRAFT  IN THE AMOUNT OF $10,5MUSD WHICH I SENT TO YOUR EMAIL ADDRESS YESTERDAY AND THIS APPROVED DRAFT INCLUDES YOUR FUND INTEREST AMOUNT FOR THIS YEARS AWAITING,SO CALL ME NOW TO CONFIRM IT OKAY:-+234-818-696-1788.

NOTE THAT WE ARE PAYING YOU THROUGH OUR OIL RESERVE BANK ACCOUNT WITH THE JP MORGAN CHASE BANK NEW YORK,USA AND THEY WILL CREDIT YOUR FUND ONCE YOU HAVE THE ORIGINAL CERTIFIED BANK DRAFT HARD COPY AND DEPOSIT IT TO ANY BANK OF YOUR CHOICE IN THE WORLD.

YOU ARE HEREBY ADVICE TO TAKE THE SCAN COPY OF YOUR CERTIFIED BANK DRAFT TO YOUR LOCAL BANK AND CONFIRM IT BEFORE WE CAN SEND YOU THE ORIGINAL HARD COPY OR YOU CAN COME DOWN FOR THE COLLECTION HERE OKAY.

I AWAIT TO HEAR FROM YOU SOONEST.

This is a personal email I received a year ago. Although I kept it due to its humorous and ridiculous content, it has turned out to be a rather good example of a “419” scam, which I will discuss in this post. This particular scam can be found archived at scam.org.

So, what differentiates 419 scams from other internet scams? The 419 scam is a type of advanced-fee scam, a scam which usually involves promising the victim a significant share of a large sum of money, which requires a small up-front payment to obtain. If the victim makes the payment, the scammer either invents a series of  further fees for the victim to pay, or simply disappears. The number “419” is a reference to the section of Nigerian law that the scam violates, as many of these scams originate in Nigeria.

Or at least they’re commonly thought to. The fact is, they often originate in other African countries, and further afield, like the UK, Spain, and Taiwan. In fact, if  you take a look at the email address from which Reverend Doctor John H Williams sent me his offer of US$10.5, you’ll see the tag “.tw“, which is the internet country code top-level domain (ccTLD) for Taiwan. Despite this, 491scam.org uses this email as a prime example of a 419 scam, and even states that this type of fraud is “dominated by criminals from Nigeria and other countries in Africa”.

The idea that this type of scam is endemic to Nigeria isn’t helped by these scams actually claiming to be from Nigeria, regardless of whether they are or not. Not only do they paint the country in a bad light, but scammers often pander to common Western stereotypes of Africa and Africans in order to exploit (predominantly Western) victims’ sense of pity for “inferior” humans. Reasons for these scams range from social influence to economic factors, and even include some forms of vigilante justice.

In the 2008 report Problematic Empowerment by Jenna Burrell, assistant professor at the University of California-Berkeley’s School of Information, a young Ghanaian man she interviewed named Yaw “noted that his friends didn’t feel bad about scamming because… ‘they say the white man is the biggest thief’,” rationalising scamming activities as an expression of vigilante justice rather than a crime. Following this, Yaw also noted the resentment many Ghanaians have towards harsh migration restrictions preventing them from seeking opportunities overseas, and some feel that “because they can’t go to America they will take money from Americans”. He added that it’s satisfying for scammers and their sympathisers to imagine the moment when racist Western scam victims realise they’ve been outwitted by individuals they had thought to be inferior.

False representations abound, not only do these scams reinforce stereotypes of Africa, the same can be said of the interpretations of the West from people in the countries where these scams are common (for example, in Ghana, as Burrel’s report explains). One example is the above-mentioned perceived racism of white and Western people, which itself is racism and perpetuates misinterpretations (a notable example of which is that more than 20% of Americans, almost 64 million people, are not white). According to Burrel, a lot of young men in Ghana get into scamming through things such as “peer influence and emulation, and through perceptions of limitless wealth in the West”.

This scamming scenario relates to what Aday et al describe in their in their 2010 report BLOGS AND BULLETS: new media in contentious politics, that sceptics of new media worry that it can encourage self-segregation and polarisation as people seek out only information that reinforces their prior beliefs, which can lead to the spread of hatred, misinformation, and prejudice. Furthermore, as Burrell points out, these scams have a low rate of success. So, do they really help anyone at all, or is it all simply a destructive hobby?

PS. Regarding the Nigerian Prince trope often associated with 419 scams, Nigeria is in fact a federal presidential republic without a royal family.

1 Response to Scamming for Justice