During the last decades, we have seen how new technologies have altered as well as eased the ways of how we can communicate with each other around the world. This blog, for example, is a perfect sign of what new types of media really enables us to do. We are four people, situated in four different places around the world and we are still able to communicate our thoughts to each other regarding new media, activism and development and we may choose who to share this information with.

Not only has the explosion of ICTs introduced new ways for us to communicate, events such as the Arab Spring, the Occupy Wall street movement among others, also show that activists and social movements have used new media tools and social media platforms effectively to enforce different social changes in various societies.

In Alternative and activism new media, Lievrouw (2011) discusses exactly that, and she especially highlights five different genres of how artists, activists, and other citizen groups worldwide use new media and ICTs to challenge mainstream media cultures, as well as presenting alternative and marginal opinions, which is indeed very interesting. I definitely agree with her points that we live in a world where “media audiences and consumers are now also media users and participants”(p.1), and how the use of ICTs basically gives everyone with an access to the Internet the possibility to provide critical perspectives on issues that they feel have been neglected in the mainstream media. However, having the possibility to write and reflect regarding issues does not necessarily mean that one has the ability to enforce long-term social changes in societies by doing so, or does it? 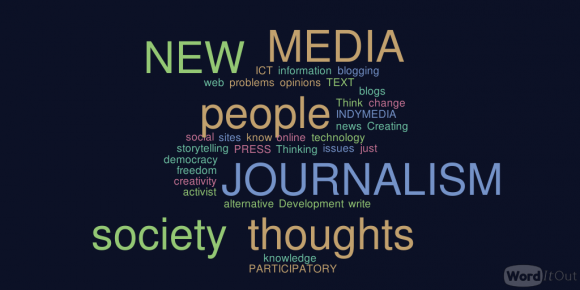 Participatory journalism, also often called citizen journalism is one of the genres that Lievrouw describes in her book, which includes web-based grassroots, and open-source journalism, alternative as well as the creation of independent, or radical news sites and opinion blogs. Even though, participatory journalistic media projects may vary in its form, they usually share the intention to critique established conventional press.

Indymedia websites are also specifically discussed in-depth by Lievrouw; which was a movement initiated by anti-WHO media activists protesting in Seattle in 1999. These activists were driven by the motto to “don’t hate the media – Be the media”, and underlined the democratic right to produce their own news services, meaning that anyone had the opportunity to give their perspective on a news event, and in that case the protests against the World Trade Organization.

Although Wikileaks might be one of the most famous examples of a participatory journalistic project, Maka Angola is an alternative Angolan news website that wishes to do precisely what Lievrouw argues is the essence of (not only)participatory journalism projects; that is “to cover communities, stories and points of views that are neglected by the mainstream press”(Leivrouw, 2011, p. 19-20).

However, it is also necessary to underline that participatory journalism also often is characterized by an increased participation of amateurs, which is not the case of Maka Angola. This website’s main aim is to support anti-corruption and democracy in Angola and is created and funded by the Angolan investigative journalist Rafael Marques de Morais, who, himself was imprisoned in 1999 for calling the Angolan President Dos Santos a dictator in the article The Lipstick of Dictatorship.

Maka Angola does not only report issues relevant to anti-corruption and democracy, but also maintain a Facebook profile, a twitter account as well as a Youtube channel, where news and videos of relevance are continuously added. The news online service’s presence on various new media platforms has opened up new possibilities for citizens to participate in a freer environment, which is seldom given within the mainstream media atmosphere in Angola, according to the Freedom house.

In order to understand the context of a news online service such as Maka Angola or other alternative websites in the country, I believe that it is quite necessary to understand the political and media culture of Angola first. According to the Freedom House; most mainstream media in Angola is either firmly controlled by the government or state-owned and that:

“[s]elf-censorship by journalists at both state-run and private outlets is commonplace in the coercive environment created by the government and security forces”.

In 2010, an improved new state security law was passed in the parliament known as Article 26, which the government often has used to imprison journalists and activists, especially those who hold opposing views to the government ruling party MPLA.

The index Censorship also reports that harassment and abusing journalists and human rights activists that cover sensitive stories, often regarding anti-government protests has been quite common. Even though private radios do exist, they are not allowed to broadcast to other provinces than in the one that they are situated in, and the Freedom house writes that:

“they must instead open a new station in every province in which they wish to broadcast, making private radio penetration outside Luanda extremely limited”.

This additionally points to that it is quite hard to challenge the mainstream media climate in Angola.

So, can new alternative media websites, such as Maka Angola really contribute to a more democratic and anti-corrupt society, which the website sets out to do? Well, I guess at least by giving an alternative perspective of events that have taken place, or even retell news events that are not even covered in mainstream media, it may at least actively engage the audience in a more diverse, varied and new type of storytelling about the country.

By giving an alternative to what the mainstream media broadcasts, it may be seen as a significant drive for social change, or at least opening up the discussion regarding corruption and democracy among citizens in the society that in turn may impose some form of social change. Even though Lievrouw does not specifically discuss Maka Angola, she does underline that participatory media projects may challenge conventional media outputs, which is a good indicator for possible social developments.

Nevertheless, it is equally important to note that news websites such as Maka Angola only can reach those that have access to the Internet, which according to the Freedom House is merely around 17 percent of the Angolan population; a relatively low figure. Therefore, new media activist sites of this kind may most probably only contribute to bring non-covered news to light to very few citizens, and might instead be easier for citizens to access living in countries where the Internet penetration is more widespread.

See the video below of Rafael Marques de Morais speaking regarding the media landscape in Angola after receiving a journalism nomination for the Indexawards 2015 (Indexoncensorship.com).

This entry was posted on Sunday, September 20th, 2015 at 6:46 pm and is filed under Lidia Naskova. You can follow any comments to this entry through the RSS 2.0 feed. Both comments and pings are currently closed.