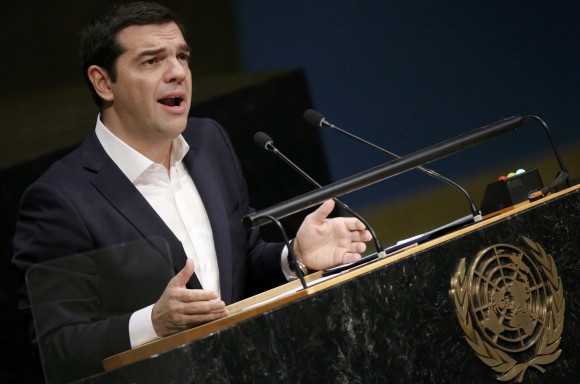 The Greek Prime Minister gave a speech during the United Nations Sustainable Development Summit. This speech could have been the epitome of his political program, but only before he came on power, in January 25th, 2015.

A quick tour through the political situation in Greece

Those 9 months after SYRIZA’s victory back in January, have been extremely crucial for the Greek economy. Meanwhile, a referendum was held back in July, regarding to whether the Greek government should agree for a third bailout program or not. The result was a ‘loud’ 62% ‘NO vote’, but still, a week after the referendum, this third bailout program has been signed between the Greek government and the European partners. Just to make sure that Greeks will not… die of boredom, the citizens were called for… some more elections in the 20th of September, 2015. The result was another victory for Tsipras and the Greek government is now a coalition between SYRIZA and ANEL (a right-wind party). The same coalition government, as it was shaped in January 2015.

One of the most central pylons of SYRIZA’s rhetoric was about the Greek debt. According to Eurostat, the Greek debt reaches the unimaginable 177% of the GDP for 2014. To talk with numbers, a bit more than 317 billion (!) euros.

Tsipras, during his electional campaign, was declaring that the Greek debt simply cannot be repaid if Greece continues to receive loans and he was confident that he had an alternative to offer. This is not the time and place to point fingers, but a series of bad choices, both from the Greek government and also the European partners, led to the third bailout program; in other words, a brand new loan of up to 86 billion euros for the next three years.

Introducing the Greek problem to the world – The developmental connection

Even though the agreement is already signed, Tsipras talked about the Greek debt in his UN speech. The reason he did that was because the bailout program came with the ‘promise’ by the lenders that there will be a discussion for a potential relief of the Greek debt in the future, so the Greek Prime Minister is working on this direction.

He may have failed to reduce the debt during the negotiations, but he’s trying to internationalize this issue, in every possible way. His choice of speaking about the Greek debt during the UN’s Sustainable Development Summit was far from coincidental.

David Lewis explains how the internet, combined with events of such international and developmental importance, is a great opportunity to connect the outsiders with the latest developments (Lewis, 2013, p. 196). He goes on, pointing out the way through which many leaders used the 2010 MGD Summit as a ‘vehicle’ to promote their countries’ political goals and he uses the work of many other theorists (to name a few Long, Boas and McNeill, Mosse, Harper) before he cites the following: “Reflecting on global conferences, Long (2004: 25) has argued that such mega-events have become part of the process of “knowledge production”, “dissemination”, and “transformation” in global politics, multilateral organizations and constructivist analysis of international relations. Global conferences are thus part of the discursive development repertoire that includes meetings and consultancy missions” (Lewis, 2013, p. 197-198).

Tsipras is using such a ‘mega-event’, trying to present that a reduction of the debt is a prerequisite in order for development to be achieved.  “We cannot talk substantially about aid in developing countries or loans in developed ones, unless we tackle the issue of debt as an international challenge at the center of our global financial system”, were his exact words. Of course the numbers are an enemy for Tsipras. There is a reason why Greece has this huge debt, but Tsipras’ goal is not to present numbers. While Lewis explores the common ground between media, representation and development, he underlines that “…representation can be taken to refer to the way that art, literature and media are transformative, not so much mirroring reality but instead ‘representing’ it according to conscious or unconscious conventions” (Lewis, 2013, p. 4). Tsipras wants to prove that the huge debt represents how development will never be achieved unless something is done differently.

The use of new media

Another vital actor of the Prime Minister’s goals is the usage of the ‘new media’. It doesn’t seem enough that he’s connecting development with the Greek debt using the “UN microphone”; He’s also using the ‘new media’ to spread his message. One could only wonder why. Is it possible that the mainstream media would not cover sufficiently a Prime Minister’s speech in the UN? Don’t hold your breath on that.

A quick search in the website of the Reporters without Borders reveals some very interesting conclusions. Germany is strongly against the reduction of the Greek debt, something that the country’s Minister of Finance, Wolfgang Schäuble makes clear in every chance he’s got. Tsipra’s referrence to post World War II Germany, and the reduction of the country’s debt, is a direct message. He said: “Historical experience shows that debt restructuring is necessary for recovery, even for developed countries, as it happened for Germany in 1953“.

And it is not the first time he adresses this issue. Three days after July’s referendum, he gave a speech to the European Parliament and he said, addresing personally to the German leader of the European People’s Party, Manfred Weber: “The strongest moment of solidarity in modern European history was in 1953, when your country came out of two World Wars and the peoples of Europe showed the greatest possible solidarity. 60% of Germany’s debt was written off that time”. (watch after 08:20 min)

What’s Germany’s ranking on the RwB’s list about press freedom? Germany holds the 12th place, not even in the top 10! Belgium, where the ‘heart’ of Europe’s decisions is beating, holds the 15th place, while countries with similar financial crises like Greece’s, as Spain, Portugal and Italy appear to be on the 33rd, 26th and 73rd place! Maybe Tsipras doesn’t even trust the media in his own country, as Greece cannot be found in that list before the 91st place! 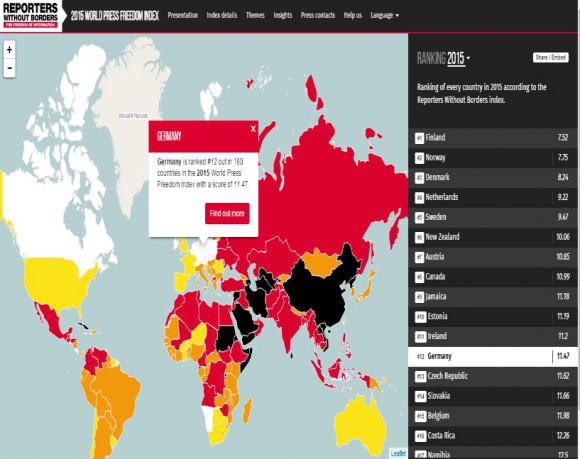 That’s why he’s using the ‘social media sphere’ to cover every move he makes regarding to the Greek debt. As Hemer and Tufte would add here, “…the communications sphere becomes an essential medium through which individual participants and players identify, interpret and represent their social and cultural wants and needs. In doing this, they begin to shape development itself” (Hemer & Tufte, 2005, p. 299)”.

Pros and cons of social media use

Tsipra’s twitter account is ‘bombing’ his followers with every kind of information about the Prime Minister’s actions outside Greece. 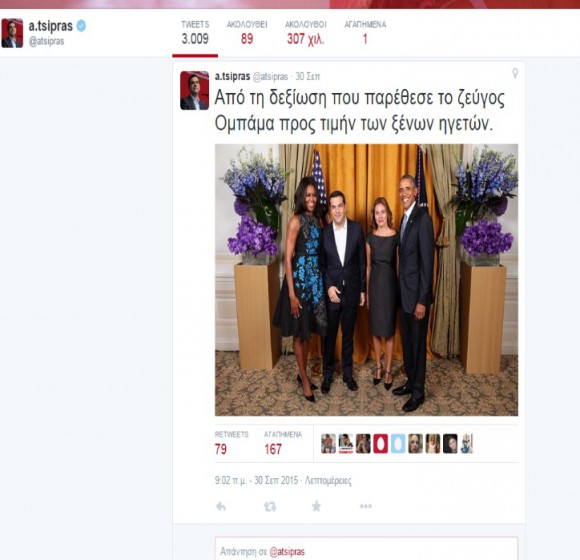 Barack Obama and his wife Michel, take a picture with Alexis Tsipras and his wife Betty, during the Greek Prime Minister’s trip to the USA

As always, though, this tactic has advantages and disadvantages.

Tsipras wants to mobilize as many people as possible worldwide, because he strongly believes that the Greek crisis is not only a Greek problem, but a European one. Shirky cites that “as the communications landscape gets denser, more complex, and more participatory, the networked population is gaining greater access to information, more opportunities to engage in public speech, and an enhanced ability to undertake collective action” (Shirky, 2010, p.1). Shirky goes on referring to a Katz and Lazarsfeld’s famous study, which indicates that mass media alone do not change people’s minds. The study points out that this is a two-step process in which opinions are firstly transmitted by the media, and then it is in this second, social step that political opinions are formed. In this second step, the social media can make a difference (Shirky, 2010, p.4) and Tsipras seems willing to put a huge effort to this direction. Another extremely interesting input by Shirky is what he calls “shared awareness”, explaining how “the social media increase shared awareness by propagating messages through social networks” (Shirky, 2010, p.5). 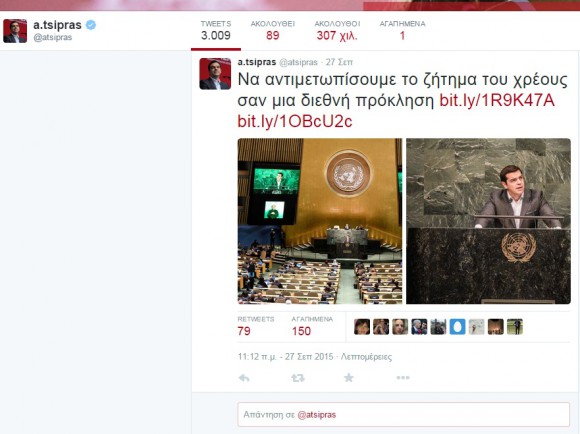 Similarly, Archetti refers to Eytan Gilboa, who distinguishes three models of ‘uses and effects’ about the way media are used as tools of foreign policy and international negotiation. The first one is the ‘public diplomacy’, “where state and non-state actors use the media to influence public opinion abroad” (Archetti, 2012, p. 186). Does that ring a bell? All the above mentioned practices are describing how Tsipras is trying to convert the Greek debt issue from a local, to a global one, connecting it with development issues.

Every coin has two sides, though. Even if we accept that Tsipras can succeed on spreading the Greek problem globally, there are still good chances that the audiences he reaches will not fully understand the issue. Shirky gives a very solid argument, that even though political freedom is generated through communicative freedom, the Internet’s structure cannot guarantee that the “outsiders” will successfully understand the local conditions of another country (Shirky, 2010, p.3). Likewise, Archetti also underlines the issue of the local differences, setting the question: “How can any analysis of the effectiveness of communication with audiences have any practical relevance if local differences are not taken into consideration?” (Archetti, 2012, p. 188). If Tsipras’s goal is to send the message only to relatively homogenous audiences (e.g. Berlin, Brussels and the EU in general), maybe he has a chance of success. But if that’s the case, then why did he choose to talk about a ‘taboo’ issue during a UN summit? He referred to the Greek debt while being in the United States, so clearly he wanted to send his message also to the USA, where the local audience of the ‘social media sphere’ is completely different. It seems like this choice might meet some serious problems.

Going back to Shirky and the downsides of the social media, we come up with another obstacle for Tsipras. It is about how the governments are also becoming better at using these tools to suppress dissent (Shirky, 2010, p.6).

It is clear that this is a two way street and (hopefully) Tsipras is aware of that. His efforts to that goal are ongoing and it remains to be seen whether he will succeed a debt reduction.

By the way, the Greek Prime Minister has repeatedly made clear that he will only wear a tie when his absolute political goal is achieved… 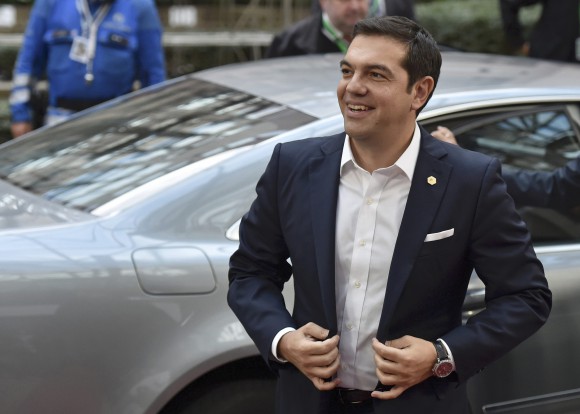 Archetti, C. 2012: The Impact of New Media on Diplomatic Practice:An Evolutionary Model of Change,  The Hague Journal of Diplomacy 7: 181-206.

This entry was posted on Sunday, October 4th, 2015 at 3:37 pm and is filed under Christos Mavraganis. You can follow any comments to this entry through the RSS 2.0 feed. Both comments and pings are currently closed.