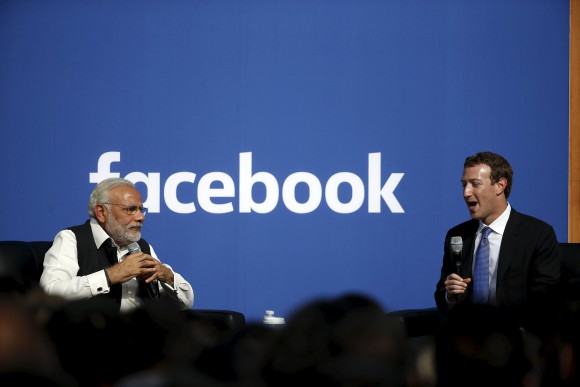 On September 29th 2015, Modi became the first Indian head of state who visited California since Indira Ghandi in 1982 and he had a meeting with Facebook’s CEO, Mark Zuckerberg, at the headquarters of the world’s most powerful social network. 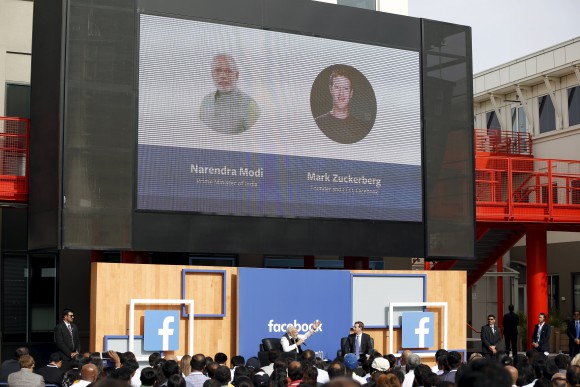 Modi and Zuckerberg in the big screen – Reuters

The Indian Prime Minister had also meetings with the CEOs of Google, Apple and a number of top class tech companies, as he seems to understand the power of the social media.

The Indian Prime Minister during his visit in Google – Reuters

Modi himself is known for being a very active user of Facebook and Twitter, something that was made clear through his posts on his personal accounts those days. 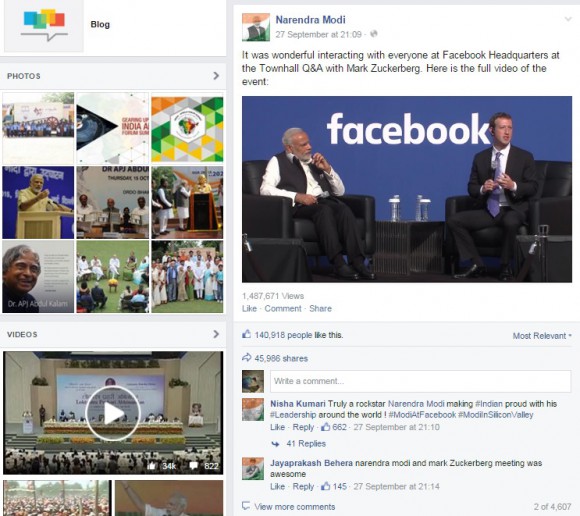 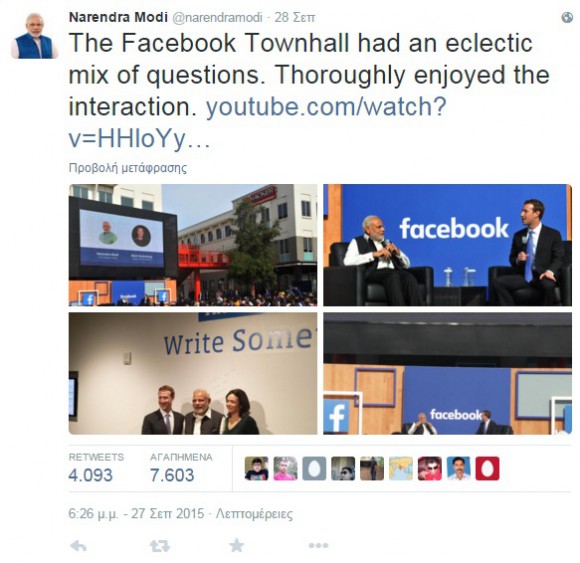 The goal of this trip can be described with two words: “Digital India”. A wide program of economic and technological development is his vision for India, while he promised to end government corruption and reduce government regulation of business.

This is what Modi said during the interview session with Mark Zuckerberg which was streamed online through Facebook, but also attracted around 1.200 people in the audience.

The contact points of social media and politics in Modi’s quote are more than obvious. Even though his goal is the growth of India’s economy through new technologies, he is talking about politics. Because nowadays, the power of the new media is something that has to be examined as it is: as something multidimensional.

Bart Cammaerts, exploring the connection between media and social movements, is jumping to the conclusion that “media can be understood both as a medium to communicate… as well as a battlefield – a ‘symbolic arena’ – for the struggle to signify, where meanings making sense of the world and ideas of what citizenship entails” (Cammaerts, 2007, p. 220).

People pointing out the government’s mistakes is a procedure that is occurring inside this ‘symbolic arena’ and of course the prerequisite is that the people are actively participating. At another point and referring to participation, Cammaerts is presenting Pateman’s definitions of participation, which is divided to “partial” and “full”. The definition of the latest is “a process where each individual member of a decision-making body has equal power to determine the outcome of decisions” (Pateman, 1970: 71 referenced by Cammaerts, 2007, p. 88) and in Modi’s quote, the two members are the governments and the people. He said that “we used to have elections every five years and now we can have them every five minutes”, but regardless his vision, it still seems unlikely that there is “equal power” between those two parts regarding to the decision making process. At least not yet.

Do you really want the power?

On the other hand, this equality between the governments and the people, inside the new media sphere, would be necessarily an advantage for the people? Shirky would suggest being cautious about it. Referring to the skepticism around social media, he notes that the social media tools “produce as much harm to democratization as good, because repressive governments are becoming better at using these tools to suppress dissent” (Shirky, 2010, p. 6). But let’s move from theory to practice; A cnbc article that covered Modi’s visit, points out that his plans for India have also strong enemies. It is reported that some activists organized protests “to press the Prime Minister over creation of a Sikh homeland, along with alleged mistreatment of Muslims and Christians by groups linked to his Hindu nationalist Bharatiya Janata Party”. Is it possible that Narendra Modi intends to use the technological growth in India for his personal political benefits?

Moreover and apart from the ‘games of power’, there are more serious problems in this government-people interaction through the new media. Cammaerts is underlying the obstacle of the access to the Internet (Cammaerts, 2007, p. 220), which is of course vital for the above mentioned ‘cooperation’. It is cited in the same cnbc report that around 300 million Indians use the Internet but another billion don’t have access at all. But is there development without internet access? 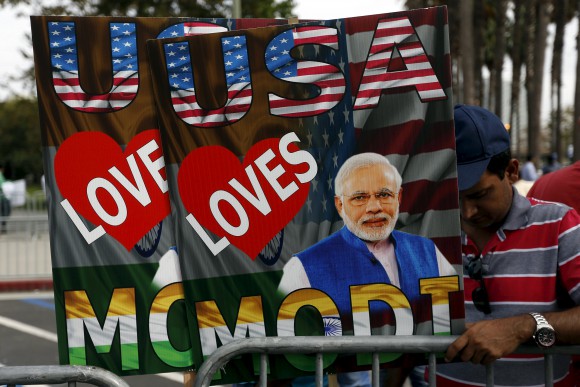 Pieterse, in the 10th chapter of the “Development Theory”, is presenting the way through the digital media policies apply to the notion of development. He notices a “digital divide” which lies between the ICT and theories of development and he presents some statistical examples to describe this division, for example how “Manhattan has more internet providers than all of Africa” (Fors and Moreno 2002, referenced by Pieterse, 2010, p. 166). Referring to the need for bridging this ‘gap’ though, he quickly makes it clear that this divide is not digital, but socioeconomic. He notes that “…representing the divide in technical terms suggests technical solutions. It suggests digital solutions for digital problems (Cullen 2001;Warschauer 2003: 298 referenced by Pieterse, 2010, p. 167) and he refers to Thompson to describe that connectivity and economic development have to be equalized and that ICT has to be considered as the key to bridging the rich-poor gap. Hence, “the discourse surrounding ICT has thus become part of developmental discourse itself” (Thompson 2004: 105 referenced by Pieterse, 2010, p. 167).

Regarding to Modi’s ambitions for “Digital India”, the limited internet access is the ‘digital problem’ and a promising step towards the ‘digital solution’ has been made during the Prime Minister’s visit in Silicon Valley. Modi had a meeting with Google’s Pichai, who afterwards announced that his company will provide Wi-Fi service to 400 train stations across India, which he said would serve 10 million rail passengers daily. In addition, Modi himself announced that he is planning to crisscross the country with fiber optic networks.

Once more, we have to look at the other side of the coin, sticking to Pieterse’s thinking of ICT for development. The author refers to call centers that have opened in India and wonders whether teleservices are beneficial for the country, while noting that even though new jobs are offered, the attrition rate in India was 30 to 35%. He underlines that development through those call centers is coming with the Indian workers being forced to adopt fake identities and he adds: “They are a pseudo transfer of technology which only transfers end-user capability” (Pieterse, 2010, p. 168).

Inevitably a serious question arises about Modi’s strategic goals during his visit to the center of the new media field; Are they actually in favor or against the developmental and technological growth of his own country?

This entry was posted on Monday, October 19th, 2015 at 12:44 pm and is filed under Christos Mavraganis. You can follow any comments to this entry through the RSS 2.0 feed. Both comments and pings are currently closed.