“[b]logs are part of a fundamental shift in how we communicate. Just a few decades ago, our media culture was dominated by a small number of media producers who distributed their publication and broadcast to large, relatively passive audiences. Today, newspapers and television stations have to adapt to a new reality, where ordinary people create media and share their creations online. We have moved from a culture domination by mass media, using one-to-many communication, to one where participatory media, using many-to-many communication, is becoming the norm” (31).

It is quite easy to agree with Walker Rettberg that blogs have not only become a very significant source of information for a large group of people nowadays, but also given “ordinary” citizens wider abilities to inform and discuss what they feel has been neglected by the mainstream media, or just solely be able to speak, or rather write their mind without less communication limitations. 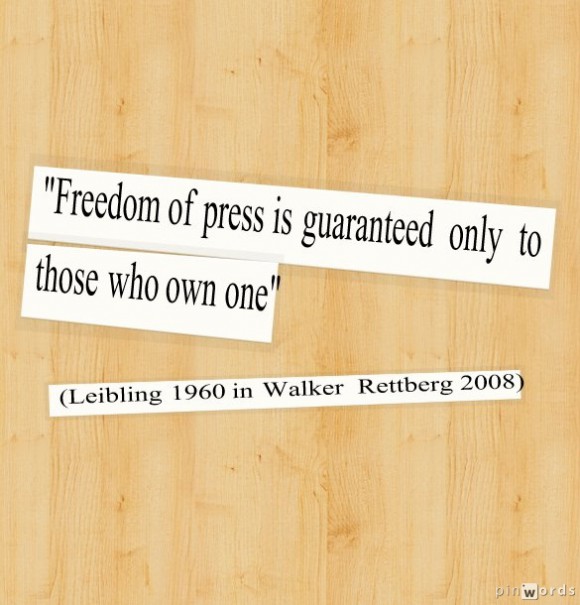 Even though most people, and governments in particular, consider freedom of expression as an fundamental human right and an essential part of a free society, where blogs might be a significant tool that can provide a new space for this on the Internet, the constant use of a quote such as Joseph Liebling’s (to the left), points to that it may not be regarded as a guarantee all over the world.

On the other hand, blogs have, according to Walker Wettberg eased the way for freedom of speech in many countries; if one compares to the time before internet communication and blogging. Back then, it particularly was harder to find opportunities where contrasting views could be expressed. Although alternative media channels did exist before the Internet in the form of pirate radio stations for instance; the domination of mainstream media repeatedly resulted in few people being informed regarding opposing opinions.

Blogging on the Internet provides not only a setting to express diverse (or traditional) opinions, it comparatively enables many people to own and control their own media channels to a relatively low price, which may be considered as significant part of freedom of speech. With this in mind, I find it essential to say that, despite the fact that ideas are often free to speak or to be written on the internet nowadays, nevertheless communicating them out in the open does not often come without any consequences, in especially limited media environments, which the following example denotes. 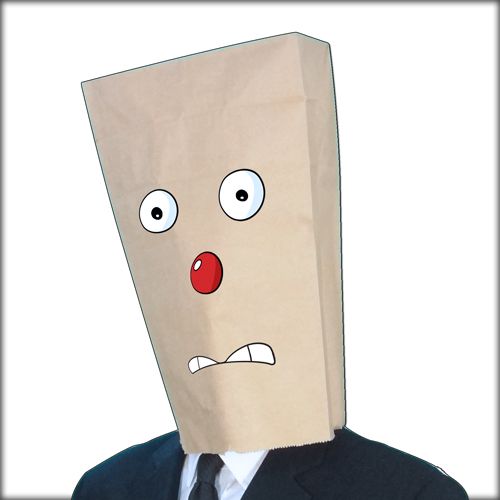 With the slogan “[t]he worst nightmare of people and companies that promote misleading advertisement”, the Brazilian Canal do Otário (eng. Sucker’s Channel) was initiated by an anonymous Brazilian internet user in the beginning of 2012. By impersonating a relatively childish character with a paper bag over his head and calling himself “Otário Anonymous” (in Portuguese), the character discusses everything from what he believes is misleading and false advertising, government propaganda to the right to freedom of speech in short videos on YouTube.

In a Wall Street Journal interview, Otário Anonymous speaks about how important his anonymity is to be able to continue his work, and which he claims is the only way that he can be able to speak his mind about whatever he likes in Brazil. And clearly he takes his anonymity very serious, as in addition to the paper bag on his head, he wears a suit and white gloves to shield his race and age to viewers. In the videos, his speech is distorted as well, “into a high-pitch, Mickey Mouse-like voice”, according to the newspaper. It is also noted that this Brazilian video activist is one of the video bloggers, who suffer to a great extent from a lack of freedom of expression on the Internet, especially within the Brazilian media atmosphere.

The Freedom house  reports that judicial censorship is very common for Brazilian bloggers, even though an Internet Bill of Rights was passed in 2014, which foremost shall ensure privacy of users on the internet, and freedom online expression. It is still noteworthy that the same year as this bill was passed; Brazil experienced an increasing rate of violence against journalists and quite a few cases of legal censorship. As well, according to the Freedom house, Brazil’s press status year 2015 is solely regarded as partly free, despite a constitution that pledges the right of freedom of expression.

According to the Shorty awards, the character Otário Anonymous catches his followers by using special effects, and simple language to demonstrate different kinds of injustices in Brazil. In spite of his comical appearance (carrying a paper bag over the head, clown nose and distorted voice), his videos has gained a lot of followers as well as admiration on various social media platforms.

What are the vlogs about?

Many of Otário Anonymous’ vlogs critique Brazilian companies, where especially two videos have become very popular. Bradesco is one of those, which is a controversial video that has raised a lot of attention in Brazil and basically evaluates the second largest Brazilian private bank by the same name. In this piece, he warns Brazilian consumers about what he claims are hidden fees that are charged when they invest in a Bradesco S/A mutual fund. Imitating an armed robber, shooting a warning shot and putting large amounts of cash into his pockets, he claims that this is what Bradesco does to its customers. Bradesco has opposed the video, claiming it to be offensive and won a case against Google Inc. in 2012 to take it out from its YouTube’s platform. However, the Brazilian version is still possible to find on YouTube.

Another popular video; Correios evaluates the Brazilian Post and the Telegraph Corporation (Nameley Correies) Similar to Bradesco, this vlog was also banned in the Brazilian YouTube after a court order request was filed by the post company. In short, Canal do Otário critiques the state monopoly in the postage sector in Brazil in this video, and as well attempts to evaluate various rates in comparison to other countries.

What does the future hold?

So, to conclude, can there be any longstanding societal changes by using anonymous vlogging about certain injustices? Well, using video activism clearly seems to be a beneficial tool that helps this anonymous video blogger to enhance his freedom of speech on the Internet and get attention among the Brazilian population. Following some of the debates on the vlogger’s different social platforms, it seems as he brings up questions that people are very interested in and concerned about in Brazil, so his work clearly provides an unconventional space to discuss them.

Likewise, he seems to have been able to build quite a business empire out of his ideas to challenge the Brazilian mainstream media. Except from his Youtube videos, there are now also Instagram, Facebook and Twitter accounts with many followers, available apps, games, as well as the possibility to donate to Otário Anonymous for him to be able to continue his work. A growing popularity of this kind suggests that media norms are being challenged.

Questioning how the future will look like in terms of media productions is interesting and what impact this will have on development. As we can see that platforms such as Facebook, Instagram and YouTube are very influential tools and sources of information today, Walker Rettberg raises the question what role the traditional media will play in all of this in 10 years from now. Will we move towards an abandonment of the conventional press? Will all of us become somewhat of a citizen journalist reporting what concerns us the most in different blogs and on social media platforms? Looking at my own social media feeds, it confirms rather well that people already really appreciate taking part and discussing by using participatory media outlets, which Walker Rettberg notes is trend that solely will continue to rise, as the technology permits us to do it. Although blogging provides many people with a democratic potential to involve themselves in debates at a low price, she notes that there are other concerns that that we need to be aware of, such as the loss of privacy on the internet:

“In terms of privacy, democracy and communication, blogging and social networking sites    are changing our culture. While we live in democracies, are not in opposition to the government and abide by the law, the loss of privacy doesn’t matter to us. It matters greatly in less democratic countries like China, where Yahoo! and Google have given data about individuals’ searches to the government” (Walker Rettberg 2008:160).

See the talk “Wearables and how we measure ourselves through social media” by Jill Walker Rettberg at a local TEDx in Bergen; Norway.

This entry was posted on Monday, October 26th, 2015 at 3:03 pm and is filed under Lidia Naskova. You can follow any comments to this entry through the RSS 2.0 feed. Both comments and pings are currently closed.