In 2014, the environmental organization Greenpeace launched a YouTube video that was part of a campaign set out to pressure the company Lego to dissociate them from a partnership with the oil-company Shell that had been going on since the 1960s. Greenpeace targeted Lego as a part of a viral protest against Shell’s plans to drill after oil in the Arctic, and in the video, Lego characters were demonstratively placed in a Lego-built Arctic getting slowly covered with oil, along with the slogan that “Lego: everything is NOT awesome”.

Both the Guardian and the Columbia Journalism Review reported that the video reached over 6 million views in a very short period of time, which in turn led to that mainstream media outlets also started to cover the topic; a development that resulted in that additional public pressure was put on Lego to quit the partnership with the oil giant. After smaller attempts of resistance from Lego’s side, this consequently led to that they announced that they would not renew their contract with Shell; a decision that ended “a million-dollar deal between the world’s most profitable toymaker and one of the world’s largest companies”.

According to the director of the creative agency that produced the Lego-video, the aim with using video as a protest, or other ICTs is always to target young people first on online media platforms and get them engaged there, even if the target audience of the protest is another age group. If this engagement becomes successful on the Internet, other media professionals often will feel forced to cover the story in traditional media outlets as well, gradually reaching the targeted age group.

It was pinpointed that these online media strategies were carefully overthought and not let solely to coincidence when releasing a video as the one about Lego and Shell. In this case, the relationship between online environmental activism and enforcing changes offline that may have an impact on sustainable environmental development processes as well seem quite evident.

Another example where Greenpeace used similar types of online activism strategies to engage and make people act, was in a protest campaign against Nestlé, the producer of Kit Kat, and their usage of palm oil from companies ”that are trashing Indonesian rainforests, threatening the livelihoods of local people and pushing orangutans towards extinction”. Being foremost an online campaign on different social media platforms, launching a powerful video as well, it also engaged and made a lot of people aware of what was going on behind hidden doors. There are many words that can describe the media online strategies that Greenpeace used, but I think that following video says it all:

Similar to the Lego-video, the release of this video put such public pressure on Nestlé that was hard to ignore, and subsequently led to the company agreeing with Greenpeace’s demands.

Patrik Eriksson, the campaign manager for the Swedish Greenpeace underlines in an interview for IDG.se, that the case of Nestlé is a clear example of how consumers can make a difference by using social media platforms, and pinpointed that this would never have been possible without the Internet, which gives consumers the possibility to communicate directly with companies.

At one point during the online campaigning, Nestlé’s Facebook-page was closed, which caused an additional public outrage on other online media platforms, which forced the company to reopen it again.

I would like to write to Nestlé to express my deep concern about the company’s role in the destruction of Indonesia’s rainforests, and the impact this is having on people, wildlife and the climate. But emails to CEO Paul Bulcke are being blocked. As a member of the board I would appreciate it if you could please pass on my message.

The palm oil Nestlé buys to make Kit Kats is often the result of forest and peatland destruction, which is speeding up climate change and destroying the home of the endangered orangutan.

By buying palm oil from the notorious forest destroyer Sinar Mas, Nestle and the palm oil traders they buy from are involved in the destruction of Indonesia’s precious rainforests.

Sinar Mas continues to destroy rainforests to grow plantations, despite the negative impact on the people and wildlife that depend on it for their survival, and despite the fact that it is also accelerating climate change.

As the world’s largest food and drink company, Nestlé could be using its influence to insist on positive changes in the palm oil industry that would have a real benefit for the rainforests of Indonesia. Nestle uses over 320,000 tonnes of palm oil every year, which goes into a range of well-known products including Kit Kat. In the last three years, Nestlé’s use of palm oil has almost doubled according to your own figures.

Unilever and Kraft have already cancelled its contract with Sinar Mas due to its bad practices, whilst Nestlé has failed to take the same action. Please stop turning a blind eye and instead immediately:

– Stop trading with companies within the Sinar Mas group
– Stop buying Sinar Mas palm oil and pulp products from third-party suppliers.
– Engage with the Indonesian government and industry to deliver a moratorium on forest clearance and peatland protection

In short, please give the rainforests and the orangutans a break. I look forward to receiving your response in due course.

In both cases mentioned in this blog post, the Greenpeace activists also used traditional petition lists, however, signed online along with a news letter that were emailed to the companies along with the online media campaigns, so they were not only presented to raise awareness and make people appalled about the procedures of getting palm oil, they were followed up by Greenpeace to see if the companies involved would agree. 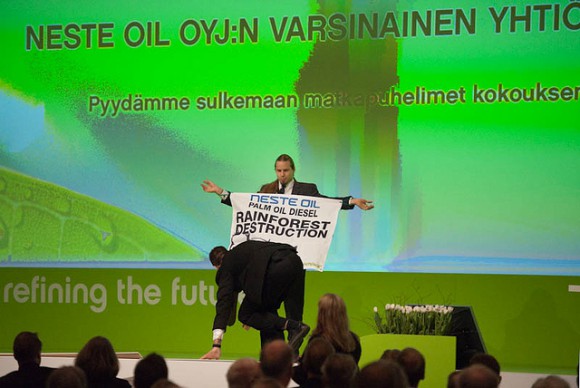 The Greenpeace protest against Nestlé – Picture by Greenpeace, [Public Domain] via Wikimedia Commons.

These campaigns exemplify the potential of why social movement organizations could use carefully planned online media strategies to enforce changes successfully offline, even though there are many examples of earlier online campaigns that have not be able to change that much, despite their viral awareness, such as, for example, Kony2012 and the hashtag #Bringbackourgirls (Taub et al. 2012).

These two examples were given tremendous attention in new media and people were participating to great extent online, however, there is also data that confirms that the collective action offline was relatively low. Online, mostly on Facebook, the solution to these issues was according to Hamilton (in Taub et al. 2012) completely oversimplified, and by scrutinizing the millions that engaged online afterwards, one might presume that they most probably would be guilty of clicktivism or slacktivism. Clicktivism-critical activist-writer Micah White claim that “modern digital campaigners don’t seek — or can’t seek — to change the status quo”, however, I don’t know if I agree completely with his viewpoints on this.

Literature (Taub et al. 2012; Lievrouw 2010; Lewis, Gray, & Meierhenrich 2014) tells us that new media, especially online media is greatly influential in raising awareness rapidly, and it definitely can help activists to gain an audience that would not have been possible without them.

Social movements communicating publicly with the companies involved in the above cases, is also a factor which seems relevant to highlight. Although this is solely speculating, there is much that point to that the negative public exposure along with a lot of pressure from online consumers influenced these companies’ decisions

Even though I think we all can agree that new media platforms eases communication possibilities for all parties involved during an online media campaign, Hamilton (in Taub et al. 2012) highlights that we need to put more attention on what happens after a video, image or online media campaign is launched, and, in similarity to Lewis, Gray, & Meierhenrich (2014), she discusses the example of the Save the Darfur movement, stating that:

“[i]f page views were the metric of success, it would have beaten out every human rights campaign in history”

I agree that supervising the after-process of an online media campaign is incredibly vital, if we wish to see any changes enforced by the use of online media activism.

Moreover, I also think we need to put more focus on the people behind the online media campaigns, instead on blindly concentrating on the technologies as the main factors for collective action offline. I draw these conclusions by relying on Postill’s (2014) thoughts on people being the essential driving forces for social change, and that one shall put more emphasis on “the freedom technologists”; the people or organizations behind the new technologies.

Summing up this discussion, I believe that these two illustrations clarify that online media activism can lead to offline action when people who are interested in a topic already are involved, but who may not be informed of an existing problem. If these people get access to this type information throughout online media platforms, or via other media outlets for that matter, they most likely will act upon it in real life. As Guardian writer Alexander Write neatly puts it:

[t]heir main barrier to becoming an activist was knowledge”.

P.S. Greenpeace surely have their own unique way to protest, have a look at a Greenpeace protest against Nestlé at a shareholder meeting:

This entry was posted on Tuesday, October 27th, 2015 at 11:46 pm and is filed under Lidia Naskova. You can follow any comments to this entry through the RSS 2.0 feed. Both comments and pings are currently closed.