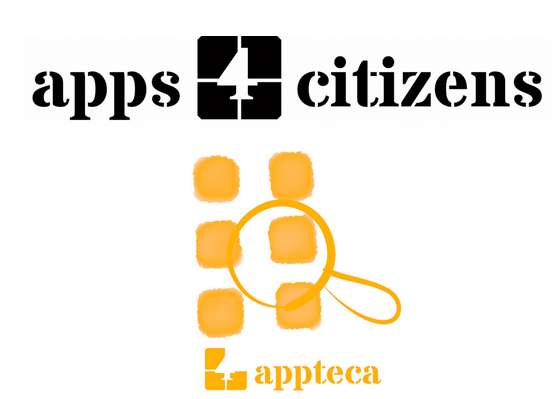 The transformative potential of digital technologies is still a contested subject, and promises of connectivity and horizontality are balanced against a lack of privacy and the existence of citizen-driven reactionary political initiatives. Nevertheless, there is a vast field for imaginative app developers who want to foster civic participation, from overt social movements to small-scale household subactivism (Bakardjieva, 2009). In fact, the current app boom provides alternative computing with a new dimension, working for emancipatory politics and political participation, without subverting mainstream uses of technology (Lievrouw, 2011), taking advantage of its popularity instead.

As a collaborative enterprise, A4C gathers apps from different countries, as well as different ways of promoting citizen engagement. There are apps conceived to manage horizontality like Appgree, which gained some notoriety after the Spanish party Podemos used it for decision-making processes. However, decision making is still far from open to the publics, and thus apps that track politicians’ parliamentary activity (Congreso 2.0, Countable Congress, VoteWatch Europe) are abundant.

Citizens facing social media shutdowns in authoritarian regimes can also find useful tools, such as FireChat. Examples of activists’ imagination to bypass governments’ prohibition are well known (e.g. Hands, 2011), and apparently outdated tools such as short text messages (SMS) can still play relevant roles in mobilisation (Castells, 2013). FireChat looks like an upgrading of these systems, and it is likely that we will witness new apps in the same vein, following increasing surveillance from governments.

For those who practice activism every instant of their lives, there are some interesting apps as well. Dollarocracy tracks private donations (or investments) on political campaigns in the US, sorted by candidates, campaigns, parties or States. The most popular example in this category might be Buycott: as the name indicates, it helps politically engaged citizens to buy more wisely, tracking companies’ social responsibility in terms of environmental impact, labor rights, and so on.

Not all of the apps listed on the webpage are really subversive, though. Along with politically motivated apps, we can find merely useful and not really political apps. For instance, health related apps can sometimes be advantageous for citizens -but not in every case, as Morozov (2013) warns us. Other apps, such as Flipboard, offer nothing more than a efficient way of managing digital contents. Whether or not citizens will use it in a political way is something out of the developer’s reach.

Some of these apps go even further and, rather than improving people’s use of digital technologies for political participation, they strengthen the current power of platform capitalism, such as Uber or Airbnb.

The rise of renewed political confrontation in countries like Spain, Greece or the US has probably led to the emergence of apps for politically engaged citizens. However, aided by buzzwords (such as ‘democratisation’ and ‘innovation’), many platforms and capitalist enterprises are making their way into alternative computing, to the extent that many of these terms are losing their meaning and purpose. Moreover, under the citizen empowerment umbrella, some of these companies are gaining huge popularity regardless of their ability to bypass democratic laws while simultaneously avoiding deep public debate.

Bakardjieva, M. (2009) Subactivism: Lifeworld and Politics in the Age of the Internet, The Information Society: An International Journal, 25:2, 91-104

Hands, J. (2011). @ is for Activism: Dissent, Resistance and Rebellion in a Digital Culture. Pluto Press.

This entry was posted on Wednesday, September 30th, 2015 at 8:17 am and is filed under Alternative Computing, Commons Knowledge, NEW MEDIA ACTIVISM. You can follow any comments to this entry through the RSS 2.0 feed. Both comments and pings are currently closed.