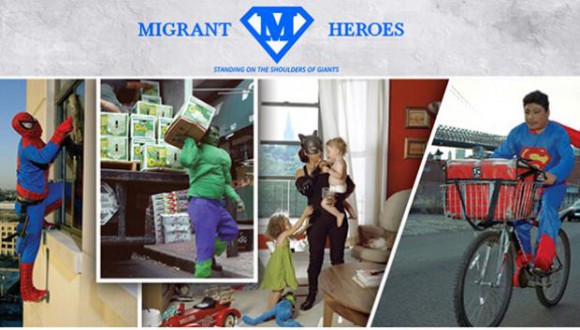 In her article Changing Public Perceptions of Immigration, IOM deputy-director general, Laura Thompson, explains that “the media has a key role to play in influencing attitudes to migration. Hardly a day goes by without migration hitting the headlines somewhere in the world. Too often, however, the media tends to focus on the negative aspects of migration. One recent study of 58,000 migration news stories, conducted by researchers at the University of Oxford, found that the most common word used to describe immigrants was “illegal”, even though by far the majority of migrants enter and reside legally.

IOM created the “Migrant Heroes” campaign (distributed on Facebook, Twitter, YouTube and Flicker) to “change the lens through which people view migrants” sharing positive stories and profiles on the matter, that will “culminate in the presentation of 10 prominent and compelling Migrant Heroes stories at the IOM Council in November 2015”, where three new Goodwill Ambassadors will be elected. The agency also associated with the British NGO MAX,(Movement Against Xenophobia) which has translated some of the stories, in posters scattered in the streets. 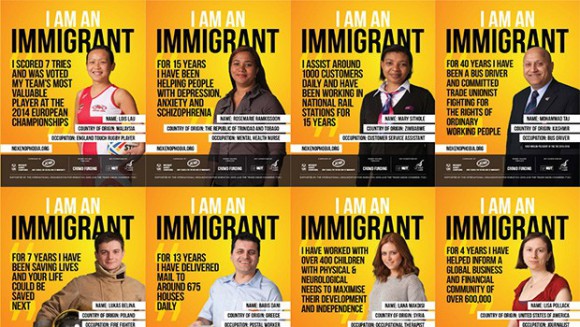 IOM has also created the website Migrants Contribute, and is preparing an oral history of migration with the project The Migrant’s Path, part of the Missing Migrants Project, to “reveal a deeper narrative about migration via human stories”.

Moreover, it’s become associated with the 5th Olleh International Smartphone Film Festival to “promote positive perceptions of migrants”, with a special Migrant Heroes Prize. The prize was awarded, on the 9th September 2015, to the film ‘Why Not’, shot by IOM Syria staff, about an internally displaced person who created a business that’s helped hundreds of fellow citizens.

Subjects or protagonists? – the participatory element

A common thread in IOM campaigns is that they give voice to the people who are the ‘subjects’ of the campaign, in the sense that they become ‘protagonists’ of their own storytelling and construction of perceptions. That is more effective and productive in terms of plurality and transformative power, conducting to the “peak” described by Lievrouw (2011, p.2) where new media forms and practices “permit social groups with diverse interests to build and sustain communities, gain visibility and voice, present alternative or marginal views, produce and share their own do-it-yourself information sources, and resist, talk back, or otherwise confront dominant media culture, politics and power”.

That confrontation can be more, or less, subversive and recuperated (or not) by traditional media. Among the stories about resilience, pride and sacrifice, creative sarcasm can also play an ‘explosive’ role in the discussion, as in the case of the Syrian refugee Mahmoud Bitar’s video, which was tracked by BBC Trending (‘Don’t come to Sweden… or think carefully about it’).

It is not a magic touch, but more a seeding effort, considering that changing beliefs and promoting action depends also on sociological, psychological, economic, political and cultural determinants; even within the so-called Global North, where material access to social media tools is more secure. New media have the potential to ignite, to create a spark that will be nurtured by complimentary, as well as conventional, mobilising tools.

Even in academia, among students of Communication for Development, there is a sense that the role of social media is indeed complementary to the grassroots approach. Nevertheless, its developing momentum and dissemination capacities can’t be ignored, as mentioned in The Guardian’s article “Social media without grassroots action not enough for a winning campaign”.

This is not a sprint, but a marathon-length process: “The potential for social media lies mainly in their support of civil society and the public sphere change measured in years and decades rather than in weeks and months” (Clay Shirky, 2010, p. 2) and “political freedom has to be accompanied by a civil society literate enough and densely connected enough to discuss the issues presented to the public” (idem, p. 4).

The fact that IOM resorted to this interplay of new media campaigns, stressing strongly the participatory component, maybe gives some hints about how its uses can evolve in the mainstream organisational field.

Shirky, C. 2010. The Political Power of Social Media: Technology, the Public Sphere and Political Change in Foreign Affairs 90: 28-I

This entry was posted on Monday, October 5th, 2015 at 6:02 pm and is filed under Mediated Mobilisation, NEW MEDIA ACTIVISM. You can follow any comments to this entry through the RSS 2.0 feed. Both comments and pings are currently closed.