The shortlist has just been published for the 2016 Kantar Information is Beautiful Awards. Although a few could be regarded as trivial, all are fascinating in their own way, and it’s interesting how many deal with issues related to international development and globalization – from the compelling interactive Unfiltered News visualizing today’s top news stories by country, through the complexity of the Determinants of Health, and the alarming Climate Spiral, to the New Arrivals Atlas of where Berliners really come from.

Good data visualizations (dataviz) can simplify and clarify – for example this one showing how only 9% of Americans actively chose the US election nominees: 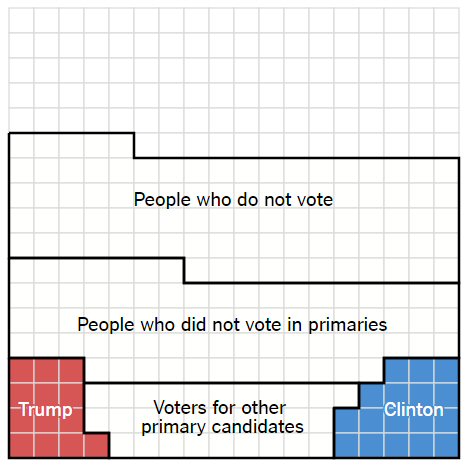 Or they can illustrate extreme complexity, where the complexity itself, rather than the detailed content, becomes the purpose of the exercise – like this memorable dataviz from Mike Peleah of the interactions between the Sustainable Development Goals (SDGs): 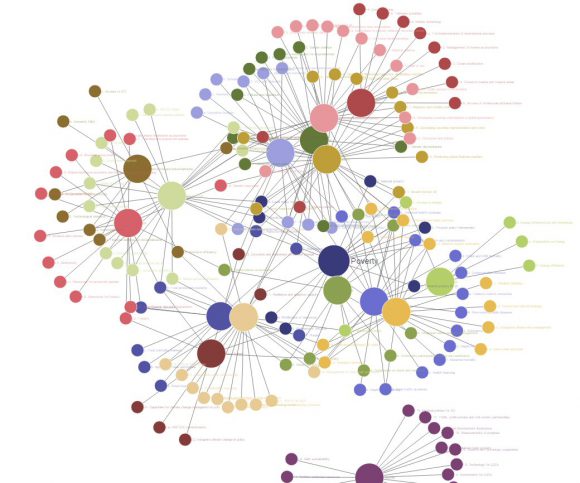 Dataviz is especially good at demonstrating gaps (such as the gender gap and health gaps) and before-and-after scenarios (such as in climate change). And with the increasing availability of Big Data sets, dataviz is really the only way we can hope to make any sense of the volume that is continually accumulating. Whether or not the use of massive data sets to gauge public opinion is likely to improve democracy is another question. For example, during the post-2015 identification of the SDGs, UN Global Pulse “worked to demonstrate the potential of Big Data and visual analytics as a truly 21st century way of unearthing which global development topics everyday people are concerned about and prioritize, even if they are not involved in the official Post-2015 process” [my italics]. Last week Global Pulse announced a new partnership with Twitter, but it will be interesting to see how far pulse-taking translates into policy, and how Global Pulse deals with the many limitations of social media as a data source. We Are Social’s 2016 Digital Yearbook report presents internet, social and mobile data for 232 countries, and illustrates the very low percentage social media penetration in many countries (e.g. Malawi, slide 131, 4% social media penetration). 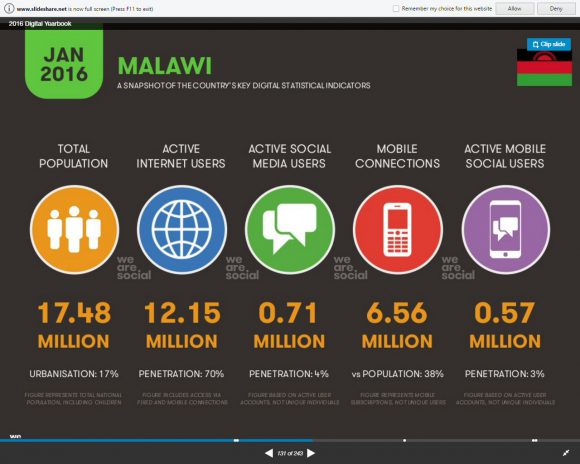 Of course, there are many issues around data sources, transparency, representation and truth – among numerous examples, Jerven (2013) questions the viability of source data generated in unresourced African countries; and Kaiser Fung’s Junk Charts site offers criticisms of misleading dataviz. I’ll aim to look at those more closely in a later blog. But the best dataviz, I think, manages to produce something beautiful that is transparent, true to the data, and also memorable, with a lasting impact on the viewer. One stunning example is “Out of Sight, Out of Mind”, Pitch Interactive’s visualization of drone strikes in Pakistan (quoted by Visualising Information for Advocacy) – click the image below for the interactive version, be patient, it takes a minute to load: 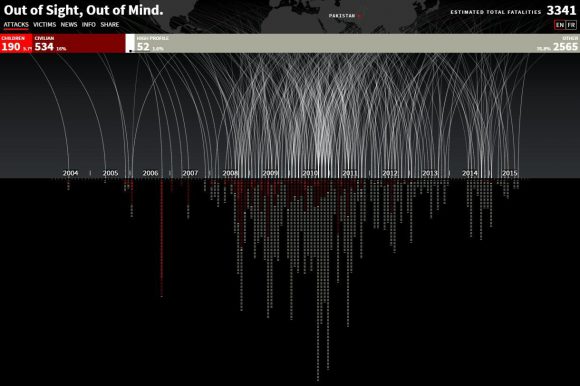 And imagery can humanize scale, as for example in Carbon Visuals’ “New York City carbon emissions” which alarmingly shows us the city’s annual production of 54 million metric tons of carbon dioxide:

But the most memorable dataviz tend to be those that succeed in combining global data with individual lives (or lives lost), as in “Out of Sight” above, or Periscopic’s “Examination of US gun murders” (again, give it a minute to load), discussed in detail by Mushon Zer-Aviv (2016), which gives us individuals’ names and the trajectory of their lost years as human components of the bigger picture.

All media, old and new, make an appeal to empathy in order to personalize a situation too huge for us to contemplate – as seen in September 2015 in the images of drowned three-year-old Aylan Kurdi on a beach in Kos, and more recently in August 2016 in the video footage of five-year-old Omran Daqneesh who was treated for head wounds after an air strike in Aleppo, summed up in this image tweeted by @khalidalbaih (#Khartoon): 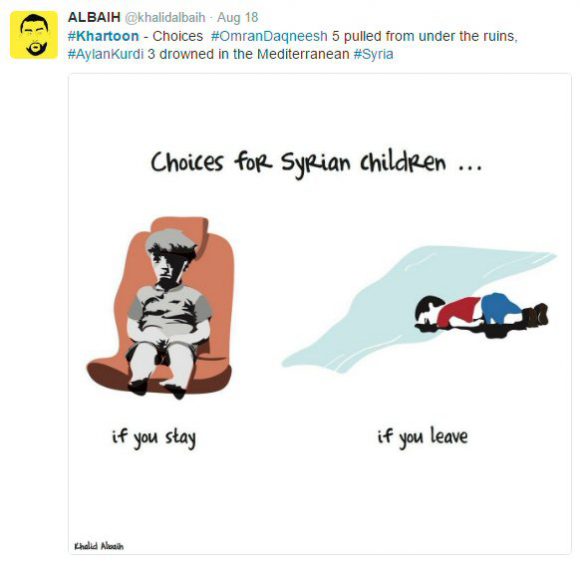 But Zer-Aviv’s blog raises questions, looking at a recent controversy over beautiful data visualizations commemorating the 70th anniversary of Hiroshima, and opening up a fascinating discussion about the place of empathy in decision-making, quoting Alberto Cairo: “By hiding faces, we reduce empathy, which might be actually good, as it lets us approach issues in a more dispassionate and neutral manner” and Paul Bloom “…our public decisions will be fairer and more moral once we put empathy aside.”

Slovic (2007) takes the opposite view (quoted by Flowing Data):

“[W]e are incapable of feeling the humanity behind the number 1,198,500,000. The circuitry in our brain is not up to this task. This same incapacity is echoed by Nobel prize winning biochemist Albert Szent Gyorgi as he struggles to comprehend the possible consequences of nuclear war: ‘I am deeply moved if I see one man suffering and would risk my life for him. Then I talk impersonally about the possible pulverization of our big cities, with a hundred million dead. I am unable to multiply one man’s suffering by a hundred million.’”

While it may be a challenge to hit the right note, artistic and poetic representations of numbers can help us overcome that incapacity. Poppy Field, by Valentina D’Efilippo (who taught me on a short dataviz course a couple of years ago) – an elegaic visualization of war deaths from 1900 to 2014, commemorating the centenary of the Great War – is one that has stayed in my memory.

Jerven, M. (2013) Poor Numbers: How We Are Misled by African Development Statistics and What To Do About It. Ithaca, NY: Cornell University Press.

3 Responses to Data, truth and beauty