Big data as our saviour

According to Spratt and Baker (2016), one of the defining features of big data is the ability to synthesize different data sets in ways that were not previously possible. They mention the possibility of using remotely sensed and crowd sourced data to ‘map’ problems of many types, such as tracking and modelling the spread of malaria, and that is exactly the theme in the Ted Talk How telecom data can radically change the way development aid works by Gautier Krings. He explains how we, to be able to reach the SDG:s by 2030, need to change and improve how we work with development. According to Krings, the basis for development workers and policy makers to function properly is good and accurate information, something he sees as lacking in traditional data collection.

One of the examples he gives is Malaria and how Zambia, and the Zambian Malaria Control Center, works with mapping the disease within the country. He mentions the need, and the lack of, good quality data and information connected to the people infected in which the absence of information of recent travels, misspellings when transferring data into the system as well inaccurate information, only gives a partial and poor image of reality. 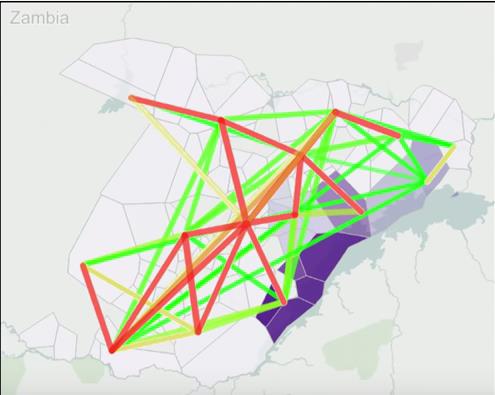 Image: a still frame from the Ted Talk “How telecom data can radically change the way development aid works” by Gautier Krings

With this image, Krings shows how the purple areas, lighter or darker depending on the amount of reported Malaria cases, are connected to the rest of the country through travel routes in which the red and green links mark mobility corridors with high or low activity (seen through the use of big data gathered from mobile phones). When analyzing this map and the data it is based on, it becomes clear that increased attention and actions in specific regions will have great implications for the prevention of Malaria in the rest of the country due to their positions and the traveling paths.

To achieve this, Krings sees mobile phones – telecom data – as a solution and claims it will help development workers change their jobs and how they work. In regards to the privacy issue, he claims that the metadata needed, which includes the phone number dialed, place, date and time, is already registered by the telephone companies to allow them to bill their customers and, since this type of tracking need mass data and not personal data, he regards it as safe to use. He thus calls for a new legal framework that allows for this type of use and analysis of data, but that still protect privacy and, according to him, one aspect of this the need for large institutions to control and monitor how, and what, data is used.

Krings ends his Ted Talk with “Tomorrow, with the help of telecom data, development workers fighting poverty and combating diseases, will become as efficient as our businesses have become when it comes to selling us new products and that day, achieving the SDG:s will be within our reach”. It is a very strong statement which, in connection to one of the first sentences in his talk – the one about only having 15 years to reach the SDG:s and how telecom data is necessary to achieve it – paints a picture of telecom data as the savior of development work and humanitarian aid. It also reflects the idea of ‘streamlining’ development organizations and comparing them to private companies.

He makes a good case in regards to the use of, and the need for, telecom data and his arguments are hard to dismiss – even the ones concerning the privacy issues. It seems apparent that this type of data can have a great impact, as seen in the Malaria case from Zambia presented, and as such it is hard to argue against it in the same way it is hard to argue against the use of big data in the aftermath of the hurricane in Haiti (Taylor & Schroeder, 2015). If it helps to save lives, and change the lives of many of the ones in risk of becoming effected, especially if the privacy is not really in any danger as he claims, it would be a mistake not to take advantage of the opportunity. But there are several issues that need to be taken into consideration.

To allow for this type of data gathering, a transfer from manually gathered and monitored data to data collected by ICT would be necessary (Spratt & Baker, 2016). In his Ted Talk, Krings says that this is not a problem since half of the population in the developing world have access to mobile phones, and he seems to have great faith in the idea of an African ‘leapfrogging’ (Spratt & Baker, 2016), in which the use of smartphones in particular will boom. Unfortunately there might be some serious problems with this assumption. As presented in an article in International Business Times by Morgan Winsor (2015), there is still a huge digital divide in Africa. 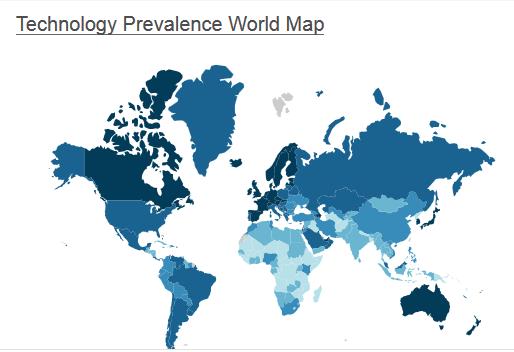 Image: a still frame from the Ted Talk “How telecom data can radically change the way development aid works” by Gautier Krings

Even though sub-Saharan Africa has been the world’s fastest-growing mobile region, with subscriber growth rates more than twice the global average during the past five years, this massive growth is expected to reach its limit in the coming years due to the problems associated with connecting rural populations in poor areas in sub-Saharan Africa. The main reason for this is the high cost of phones, especially smartphones with internet access, and subscriptions that are unreachable for many people. According to the article, cell phone ownership is highest in urban African cities that have mobile and Internet infrastructure, such as Johannesburg, Lagos and Nairobi, but more than 60 percent of the population will still lack Internet access by the end of the decade (Winsor, 2015).

This means that the data collection in Africa might not be able to comply with the “Three V’s of Big Data” (Spratt & Baker, 2016). Even though Velocity might be reached, Volume and Variety are likely to be reasons for concern due to the importance and the implications caused by where and who have access, and it could thus create data which in turn may produce biased results and conclusions drawn.

Continuing with the Malaria mapping example from Zambia, this could mean that the travel routes presented are lacking in information and some of them could thus be viewed as less active due to the absence of data although there is a high activity of unconnected people traveling. As a consequence, poor areas in specific regions of the country might not be included in the mapping of mobility corridors and thus miss out on actions taken and knowledge in regards to the specific circumstances in their area being missed or ignored. Therefore, while technology rich areas in the country receive help and support, the unconnected areas might be left to fight the disease by themselves.

So big data might be an instrument that sharpens the blunt tool of data collection, which of course would be a positive effect. But it might also become a tool only beneficial to, and used for, people who have the economy to allow them to be ‘counted’. As Taylor and Schroeder (2015) writes, to be counted means potentially obtaining access to resources. The question then becomes whether big data is a tool that should be used in this type of development and humanitarian work? It seems that the positive effects of big data are massive, in particular in regards to this type of mapping, but that there is an important risk of creating “blind spots” due to lack of connectivity. So although the manual data collection at Zambia’s Malaria Control Center is less than perfect – according to Krings – it might be a necessity to combine the two to create as much of a full picture as possible. When seeing Krings’ Ted Talk, I fear that the belief in the use of technology and big data is too high, and that seeing it as ‘the only solution’, will have negative impacts on how development and humanitarian work is planned and conducted, leaving out the most vulnerable people.

This entry was posted on Friday, October 28th, 2016 at 7:52 pm and is filed under Julia. You can follow any comments to this entry through the RSS 2.0 feed. Both comments and pings are currently closed.