“They have a following because their readers know that they are speaking the truth. But their employers could not tolerate the truth, so these bloggers have to remain in the closet.” – Dennis Whittle, Huffington Post.

The emphasis on “like-minded” is of particular significance. The study’s participants all sought to engage with an “interested audience” – one that they usually “did not find” in their own organisations (Ferguson, Soekijad, Huysman and Vaast, 2013, p. 13). One participant reported that communication from her employer was “completely disengaged from the real practice”, while another noted that organisations usually needed to communicate “a certain message” (p. 13-14).

When development professionals find their colleagues or superiors don’t share their views, what do they do? They join the blogging community.

The study’s participants all felt that the dialogue they developed with their blogs’ audiences was “often richer and more informed than those they had within their own organisations” (Ferguson, Soekijad, Huysman and Vaast, 2013, p. 13-14). The study also found that the blogger sample “moved away” from the “institutionalised” structures and routines of their employers, choosing to engage with their own “self-selected” audience of similarly-minded professionals who they found to be “more supportive” (Ferguson, Soekijad, Huysman and Vaast, 2013, p. 18-20).

In order to do this, bloggers often need to post anonymously. This is usually via their own personal blogs, set up using a pseudonym, or via anonymous submissions to blogs such as Stuff Expat Aid Workers Like or The Guardian’s Secret Aid Worker (which even provides instructions on how to encrypt submission emails). 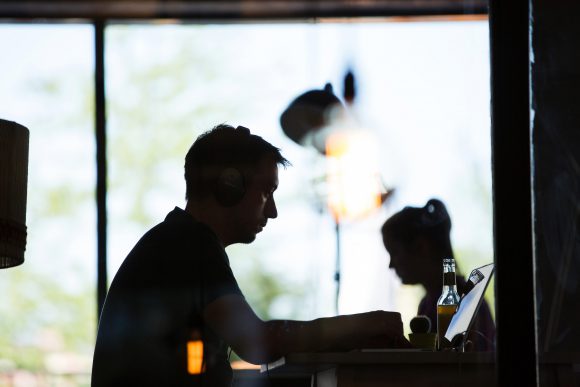 In an interview with Huffington Post, anonymous blogger J. said that his blog is a space to “admit the things I might not otherwise admit, say the things that would never be said in interagency working groups or in-house meetings”. He argues that while employers often speak of valuing diversity in ideas and input, this is often limited to the context of the communities in which aid is being delivered. J. feels that he has been unable to express opinions that are “contrary to the happy in-house propaganda” for fear of reprisal.

While some of J.’s colleagues do know about his blog, he describes the blogging community as an “informal ‘underground’ alliance” who all face similar constraints in their workplaces. He adds that some of his readers and followers on Twitter are “friends that I just haven’t met yet”.

Is this trend of anonymous blogging aiding, or hindering, transparency and progress in the development sector? On one hand, the ability to blog anonymously means that development professionals can express their views – however critical or controversial they may be – without fear of repercussion. But often these bloggers are “preaching to the choir” – while they are “developing their own discourse and thinking”, it’s often within a small community of like-minded professionals, and not reaching employers or policymakers (Ferguson, Soekijad, Huysman and Vaast, 2013, p. 220).

What’s the solution? Bloggers will continue to post anonymously while their careers may be negatively impacted by their views. But their opinions and experiences will have little impact unless they are heard by the right people.

Aid agencies and policymakers need to recognise the risks in maintaining workplace cultures that do not support their employees to voice their opinions. Algoso believes that it would be wise for organisations to develop policies “guaranteeing a certain amount of freedom for public comment from their employees, but with clear statement of what lines cannot be crossed”. Similarly, Whittle writes that organisations need to admit to their mistakes so that the industry can learn from them, arguing that aid agencies should be “platforms for conversations and learning rather than infallible oracles of aid wisdom”.

In 2008, Engineers Without Borders Canada started to share their failures via an annual Failure Report, and have created the Admitting Failure website where NGOs can share their stories. While this is very encouraging and other platforms have since been created, anonymous (and exclusive) blogging is still predominant. How else can the industry make it easier for organisations – and, more importantly, individuals – to share their failures and controversial views?

Christie is a marketing and communications professional from Melbourne, Australia. She has several years of experience in not-for-profit organisations in the international development, health and animal welfare sectors. She has also spent time in Bangkok and Jakarta working on aid programs. Christie holds a Bachelor of Communication (Journalism) from RMIT University.
View all posts by Christie →