In the summer of 2015 Siyanda Mohutsiwa, a 22-year-old Mathematics student based in Botswana, launched a tweet which was going to become viral: “If Africa was a bar, what would your country be drinking or doing?”. Siyanda started the ball rolling and the question soon became a hashtag (#IfAfricaWasABar) and obtained a collection of humorous, self-ironical, sarcastical answers from all over the continent – 60.000 tweets over a week, poking fun at national stereotypes, criticising governments, ironising over geopolitical tensions. 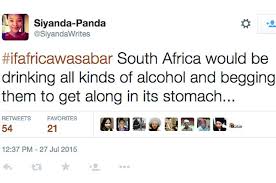 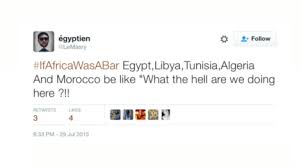 In April 2016, Mohutsiwa delivered a TED Talk about “How young Africans found a voice on Twitter”, telling her story but also discussing about the potential of Twitter for her generation to connect and converge towards the ideal of what she calls “Social Pan-Africanism”.

Because of this apparently frivolous hashtag, reflects Mohutsiwa, people were connecting over their Africanness.

So for one week in July, Twitter became a real African bar. And I was really thrilled, mainly because I realized […] that we had before us, between us, at our fingertips a platform that just needed a small spark to light in us a hunger for each other.

Mohutsiwa defines herself “Pan-Africanist by birth”, because her parents come from two different countries and she was born in one and raised in the other, growing up with a mixed identity. During adolescence, she read about African philosophies, African statesmen, decolonisation and black consciousness, and, in her words, she became “obsessed with the idea of a shared African identity”. When Twitter came, she started following people from different countries and felt like her world was opening up:

For the first time ever young Africans could discuss the future of our continent in real time, without the restriction of borders, finances and watchful governments.

Despite their differences, the fates of African nations, she argues, are deeply intertwined and tools like Twitter can help fostering what she calls social Pan-Africanism. That is, the Pan-Africanism not of leaders, but of ordinary Africans, especially young people bursting with creative energy and innovative ideas, whose potential could go to waste with “bad governance and sharky institutions”.

Access to these online networks, she argues,  has given young Africans something they had  always had to violently take: a voice.

Before now, if you wanted to be heard by your possibly tyrannical government, you were pushed to protest, suffer the consequences and have your fingers crossed that some Western paper somewhere might make someone care. But now we have opportunities to back each other up in ways we never could before.

She makes some examples: Twitter users can support South African students who are marching against  high tertiary fees or Angolan journalists who are being illegally detained. Mohutsiwa’s speech ends with this claim:“I believe that with a social Pan-Africanist thinking and using the Internet as a tool, we can begin to rescue each other, and ultimately, to rescue ourselves.”

At first, the words of this energetic 22-year-old can sound like something you already heard of: yeah, social media are a magical wand which gathers dreamers and great minds together and we will all live in a land of peace and love and vanilla milkshakes. TED talks critiques [1]have highlighted how these events often tend to oversimplify complex social, economic, cultural and political realities, portraying social change as easy and fun and often convey ideas of the“technological solutionism” [2].

In the last decade, tons of ink, virtual and not, have been dedicated to the great potential of social media and what Castells [3] calls mass self-communication. Blogs, social networking and content-sharing sites decentralise the process of creating and disseminating information [4].The web allows activists to publish and circulate uncensored information quickly and at a low cost [5]; Twitter, for instance, can be used as a means of unauthorized commentary by individuals able to secure a regular audience, with destabilising consequences for institutional structures and authority [6]. Through the internet activists can coordinate more easily across geographical distances and create transnational networks [7].

On the other side, authors like Morozov warn against the risks of cyber-utopianism:

I argue that these digital tools are simply, well, tools, and social change continues to involve many painstaking, longer-term efforts to engage with political institutions and reform movements.[8]

Twitter in Africa is a thing. Despite our own stereotypes, the continent is getting more and more connected, with statistics changing fast. Following Becker, while Africa is still the continent with the lowest internet penetration, the rapid increase in accessibility is greater than in any other region and the primary means to access the internet remains mobile broadband [9]. In recent years, Twitter has become, especially in some countries, a meaningful medium for citizens to express disagreement with media representations of their societies. The case of #SomeonetellCNN in Kenya has been seen as a sign that citizens are determined to take control of their narrative and disseminate their reactions [10]

I find some interesting points in Mohutsiwa’s experience.
Through her apparently non-serious hashtag provocation, she connected miles of people over their African identities, stimulating a self-ironical, refreshing representation of African countries from the inside, which plays with national stereotypes, and enhancing an ironical counter-narrative about and across the continent. She also implicitly counterposes in her discourse a logic of Africans “rescuing themselves and each other” to the mainstream representation of Africa as “a continent for the taking or one that needs saving”, still dominating a large part of media coverage [11].

Siyanda Mohutsiwa does not only tweet (a lot) about Africa. She started a Youtube channel through which she is active as a vlogger, although at irregular intervals. Inside this channel, along the last 4 years she produced and diffused videos about varied issues. Through this channel she mostly comments African news from a critical point of view and she reviews literature (from Africa and elsewhere).

I see this young woman’s experience as part of the wider phenomenon of the dissemination of new narratives of Africa by Africans. As Bunce, Franks and Paterson recall, flows of [communication] production today are in multiple directions. We see plenty of content produced in Africa that is then exported overseas, for example by youth culture and bloggers, while the wide diaspora of Africans based elsewhere are also producing their own media[12].

Mohutsiwa’s discourse is not focused explicitely on aid issues, although she does tackle indirectly  issues of representation and North/South relationships. She may become a new voice of African journalism, or just grow into a more and more solid social media influencer. Maybe the “Social Pan-Africanism”she dreams about is still at a very early stage, but her fresh, inquisitive voice, telling stories about  her continent, and analising fictional stories  from Africa through literary reviews, can surely be seen as a piece of puzzle of the wider picture of young Africans claiming more space to represent and reflect on their reality and more agency in shaping their future. Social media will not be a panacea to do this, but  they provide a platform and a sounding board which can undoubtedly help to bridge some gaps.

I guess that, in the future, we will see this young generation of educated and social media-conscious Africans interact more and more  with the agencies and NGOS which still have a key role in promoting an aid narrative about Africa [11]. As Anyangwe highlights, Africa’s stories are still largely told by international charities, often  “split” between their advocacy function (which is concerned with challenging long-term structural and policy issues) and their fundraising objective, that seeks to raise money, often simplyfing the discourse and using the tools of guilt and pity [11].

In 2016, Siyanda Mohutsiwa joined the UNICEF Voices of Youth programme, a platform meant to engage young reporters as bloggers on a variety of themes. She made a video report about the awareness of AIDS among teenagers in Africa. The videos were mostly focused on UNICEF’s programmes working on this issue. Naturally, in cases like this, due to the involvement with the agency that runs the platform, there wouldn’t have been space for critiques. But it would be interesting to hear young voices like Mohutsiwa’s engaging more and more in independent conversations about development and aid within their countries. It would probably help the narrative on aid to move forward, gaining complexity and diversity of points of view.

[2] Morozov , E. (2013).To Save Everything Click Here: The Folly of Technological Solutionism. Evgeny Morozov. Allen Lane

Elena is a Social sciences MA graduate with some years of experience in not-for-profit organisations in the areas of human rights, development and health. She currently works for an Italian patients’ organisation in the Communication and Fundraising unit.
View all posts by Elena →