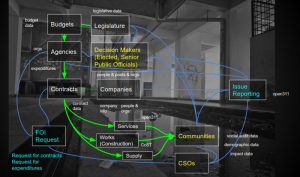 Value for Money is an overused phrase in public procurement. Many procurement decisions we are told, have been made with the goal of attaining value for money and yet, at the end, they are characterized by huge cost overruns, undue delays, corruption which eventually fail to deliver on its objectives to the ultimate beneficiaries. Indeed, a lot of examples can be cited of major procurements “gone bad”, where for instance, it cost the Kenyan government $85 for the purchase of one ball point pen and $1000 for a wheelbarrow. On an average, it is said that, about 10-15% of contract values are lost to corruption-Transparency International. The European Commission also estimates that about €120 billion (about US$163 billion) is lost each year to corruption in its member states – almost the entire annual budget of the European Union. But corruption in public procurement does not just lead to citizens’ money wasted, but also undermines the quality of works and services, which in turn endangers the environment and even cost lives.

Today, with the increasing demands from civil society and various stakeholders for greater accountability and transparency, open contracting has brought with it a yet another truism-that, it is just not enough to have a set of laws on procurement but rather there is the need to explore how best the quest for “value for money” can extend to “value to many” as coined by Gilbert Sendugwa an open contract advocate during a Forum on Open Contracting -“Let us use #opencontracting to enhance participation, value for money, and value for many #IODC16” . There is now a strong advocacy for openness in public procurement using ICT4D to enhance transparency.

One such beautiful example of open contracting using open data standards is the “Budeshi” system in Nigeria. The word “Budeshi” is from the Hausa language and literary means to Open It. It was developed under the auspices of the Public Private Development Centre a Civil Society organisation to serve as an advocacy tool to the Nigerian government to adopt the use of Open Data Standards that provide uniquely identifiables (IDs) to each line item of procurement for either goods, works or services with a trace from budget, procurement, contract awards to contract execution. To date, the system has been able to generate and make available on its platform, datasets of values of budgets and eventual budget sum of contracts from Universal Basic Education Commission and the Primary Health Care Development Agency of Nigeria which are being accessed for various third party monitoring activities.

Such a system holds a number of benefits to Procurement Monitors, Citizens etc. For monitors, it is supposed to provide an effective audit trail and a quick prompt to any inconsistency in terms of how much was budgeted for each item and how much government actually pays as well ensure that budgets are not vied to other unplanned activities. It also enables comparison of the performance of contractors working on similar projects with same specifications. For the ordinary citizen and other stakeholders, the open access to such a system using the Open Data Standards, makes it easy to download data for the purposes of further analysis among the various other data sets.

Although such a system offers effective implementation of Open Contracting which is one of the key pillars of Open Government Partnership which many countries in Africa have acceded to, its implementation has been bedevilled by a number of challenges such as poor Change Management, difficulties in the integration of other Public Financial Manangement tools like the budget, procurement, company’s registration platforms and payment systems to help trace beneficiary ownership issues as well as CSO’s readiness and capacities to use such open contracting platforms.

To fill these implementation gaps, there is the need for joint efforts in this call for adoption of the International Open Data Standards by governments and INGOs across all fields like open cities, beneficial ownership, extractive industries, humanitarian emergencies and many others in a bid to enhance transparency and good governance among governments and the corporate world.

In my next article, we will be looking at how a yet another African Country is surmounting this challenge by using ICT4D to integrate various Public Financial Management tools to meet its development objectives.

I live in Accra Ghana. I have been working in the area of communications for the part 15 years and currently with the Public Procurement Authority as the Head of Public Affairs with a focus on deepening transparency and efficiency in Public Procurement in Ghana. I am interested in exploring how social media like blogging can be used to promote the anti-corruption issues in public procurement and public financial management reforms in our part of the world. Hope to share and learn from experiences in this group especially in the area of developing an effective blog for this purpose.
View all posts by Rhoda →