I’m continuing #resist’s blogging about gender issues related to new media activism and social change by analyzing the possible rise of a new global feminist movement that has emerged from the #womensmarch. I am especially interested in how new media has supported this success and created a path for a possible transnational feminist movement. I will cover this new (feminist) social movement in relation to new media and activism further throughout my 4 blogs on this site. This first post can be seen as an introduction to a discussion that will continue on this matter. 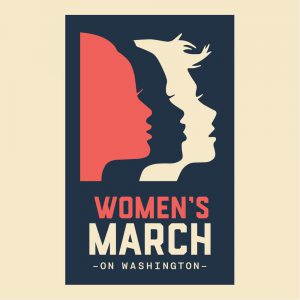 The Women’s March on Washington

To understand the context, it is important to know a bit of its background: The ’Women’s March on Washington’, using the hashtag #womensmarch,  is a women-led movement, which emerged in the context of a general public concern and discontent with the recently elected US president Donald Trump, with the aim to unite people of all genders, ages, races, cultures, political affiliations, disabilities and backgrounds for a huge march on January 21, 2017. The overall objective of the march, as expressed by #womensmarch was to ”affirm our shared humanity and pronounce our bold message of resistance and selfdetermination” [1].

”We believe that Women’s Rights are Human Rights and Human Rights are Women’s Rights.  We must create a society in which women – including Black women, Native women, poor women, immigrant women, disabled women, Muslim women, lesbian queer and trans women – are free and able to care for and nurture their families, however they are formed, in safe and healthy environments free from structural impediments”. (www.thewomensmarch.com/principles).

Inspired by former leaders for social progress, e.g.- the suffragists and abolitionists movement, the Civil Rights Movement, the feminist movement, the Black Lives Matter movement, among others, #womensmarch, recognizes that women have intersecting identities and are therefore impacted by a multitude of social justice and human rights issues. Considering this, they unite in defending a range of basic principles like ending violence, reproductive rights, LGBTQ+ rights, Workers rights, Civil rights, Disability rights, Immigrant rights and Environmental Justice[2].

Using social media as its main tool, the #womensmarch has almost 500.000 followers on Twitter and almost as many on Instagram. The official Facebook page seems be even more consulted with almost 700.000 likes, which really serves to demonstrate the magnitude and impact of this new feminist movement. Further, #womensmarch coordinate their official actions trough the website www.womensmarch.com, which has plenty of information for activists and interested people.

The starting point for why this movement emerged, as mentioned above, was the #womensmarch on January 21st 2017 with the main event taking place in Washington DC. This co-organized action became extremely successful gathering around 4,2 million persons around the U.S in more than 600 cities, marching at the same day – which turn this march into, probably, the biggest in the country’s history[3]. According to statistics, in the city of Washington between 470,000 and 680,000 people was estimated to have participated[4].

But the striking result of this march is that it also went globa,l and estimates show around 200 international Women’s Marches where held in more than 50 countries at the same date[5]. While using the hashtag #womensmarchglobal and #sistermarches, activists from all over the globe where able to share images from their local events in cities like, London, Paris, Oslo, Nairobi, Bangkok, Athens, Bucarest, among many others (see picture). 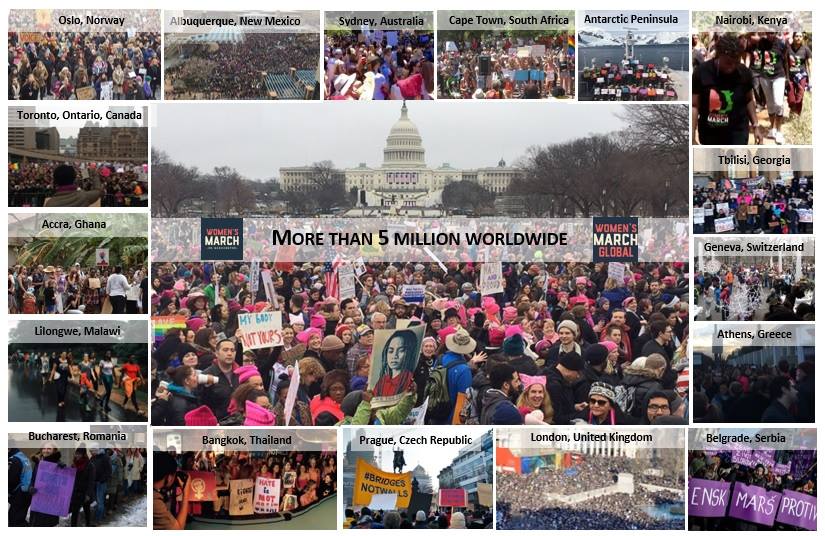 The potential for #womensmarch as a new social movement

But how come the march become so successful and how did it manage to mobilize so many people in the US and around the world? The Washington Post offers a series of 4 articles[6] by different scholars in the Political Science sphere who analyzed different aspects of the #womensmarch movement and its potential for building a new social movement. One  article discusses how women are more likely to mobilize a protest when “Governments don’t recognize or don’t enforce Women’s Internationally recognized rights”[7]. In the US, many women felt outraged by the way the new US president Donald Trump talked about and treated women; “They went into the streets because of fear that his administration would roll back women’s gains”[8]. Another factor that helped the march succeed was that it built upon and coordinated its action together with already existing social networks and organizations; “Women are more likely to protest publicly when they have plenty of connections to groups with enough resources to organize action”, as stated in the article.[9] Organizations like Planned Parenthood and Human Rights Watch supported the organization of the #womensmarch, which made it easier to use their platforms and activists for a call to action, but also by offering resources such as mobile phone apps[10], chartered buses and online or printed materials that spread the word about possible actions[11]. The same article also addresses another important aspect, which is that “Women in wealthy societies are more likely to have necessary resources — such as access to computers and office space — at their disposal to mobilize collective action”[12]. (I will discuss this in a further post where I will approach the ICTs, gender and the digital divide, as important issues considering digital activism). Finally, the authors of the article also points at the importance of a favorable political environment, so “Women have to feel that protest is the best and possibly only way to influence politics — as they may feel under Trump, considering how he campaigned”[13].

In another article [14] in the same sequence, another scholar discusses reasons why #womensmarch might succeed as a social movement, a part from other earlier initiatives which have not been able to mobilize this amount of people. One important point is that the #womensmarch “drew support from a broad swath of civil society, from old guard civil rights organizations like the ACLU to the new guard like Black Lives Matter”[15]. By mobilizing groups concerned with issues like climate change, immigrants’ rights, and LGBTQ+ rights, to survivors of sexual violence – trough a crosscutting mainstream appeal to the moderate and the wealthy – they have something that movement’s like #Blacklivesmatters and #Occupy haven’t been able to harness[16]. Another interesting fact addressed in the article, is that that the success also could be related to the non-violence spirit of the march, as no arrests were made and the organizers promoted nonviolence the whole time. It is also Interesting that research demonstrates that “disciplined nonviolence helps a movement’s chance for success — and makes it more than twice as likely to succeed as a violent movement”.[17] 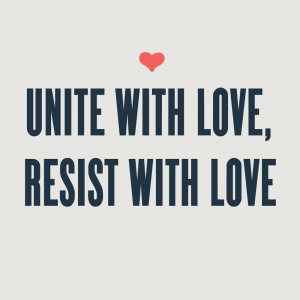 The role of New Media  for social movements

Having outlined the main aspects of this emerging social movement and its potential, I will now introduce the ‘more general’ theme that my following posts in this sequence will address: The use of new media and digital activism for #womensmarch movement. How has it helped the movement to be successful and mobilize almost 5 million people? I am also interested in how the use of new  media has helped generate a global, and possibly transnational, feminist movement.

According to Lievrouw (2013), New social movements (NSM) are “distinguished by their extensive and sophisticated uses of media and information technologies, not just as tools or channels for relaying information to participants or the wider public, but as the actual ﬁeld of action where movement concerns are articulated and struggles played out”[18]. The #womensmarch has efficiently used new media and ICTs to mobilize people for the march, as I discussed above. They are present on social media sites, with more than 500.000 followers on Facebook, Twitter and Instagram. New media (like other communication technologies) can be deﬁned as “the combination of material artifacts, people’s practices, and the social and organizational arrangements involved in the process of human Communication” [19].

Different research demonstrates the importance of the use of new media for social movements and social change. A report from the United States Institute of Peace[20] argues that there are “five distinct levels at which new media can matter: individual transformation, intergroup relations, collective action, regime policies, and external attention. These levels capture distinct pathways by which change might be manifest and measured”[21].

Regarding collective action, which forms part of my interest in studying the #womensmarch movement, the same report states that “New media may also affect the potential for individuals and groups to organize, protest, or take other forms of collective action”[22]. I would argue this can directly be reflected in the potential of the #womensmarch movement, while using the social media platforms to disseminate their actions. Finally, the report continues by saying that “Social media may reduce the transaction costs for organizing collective action, by facilitating communication and coordination across both physical and social distance”[23]. Regarding this statement, I think #womensmarch is a great example of how new media has helped to mobilize the actions of a new social movement.

There is a lot more to investigate and write about regarding this increase in new feminist social movement, a movement that is already planning its next collective global action, as “A day without a woman” to be held on the 8 th of March. I will analyze this, and new media activism activities related to  #womensmarch, further in my next blogposts. 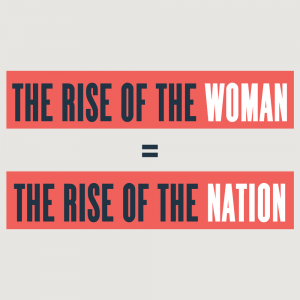