Have you ever seen someone following up their comments on a picture on Instagram, or on say a Facebook post, with references? Yeah, I didn’t think so. What of US president Donald Trump -does he bother to back up his Twitter statements with facts, nah ah. *we all know that right?!

Yet not everyone thinks to question figures of authority/governments/political propaganda especially in social media environments where you don’t necessarily feel that you are communicating in a public space, rather you find yourself in one that meshes and blends with the personal; where opinions get the same 140 characters as proven facts on Twitter; or your feed shows targeted posts from people you generally agree with on Facebook.

So, in continuing my train of thought on pocket sized phone-accessible forms of digital activism, I’m exploring how social media (more specifically Facebook, Instagram and Twitter) form an environment for activism where one person’s opinion is given the same space as somebody else’s reliable information. And noting that when opinions are given equal weight and attention as facts, ‘alternative facts’ can spread just as easily and fast (if not faster) as factual accounts.

Social media contents create their own narratives here in a way, narratives where the power of people’s opinions should not be overlooked. They may serve to manipulate an uninformed ‘general public’, such as when the recent US elections were heavily influenced by Russia[1] possibly affecting processes of democracy. Or when used as counter-arguments to reliably sourced information such as when I recently read through comments on a tattooist friend of mine’s image on Instagram where alt-right opinions were repeatedly thrown as counter-arguments to what was clearly facts on the matter at hand.

So my inspiration for this post *rant* really came about in that comments section under a picture of a stick-n-poke tattoo sketch of a pair of Timberland boots. And then it was revisited yesterday, as I was casually scrolling through my  Facebook-feed and stumbled upon two consecutive posts, both in their own ways arguing and illustrating the very important difference between opinions and facts..

which coincidentally, was directly followed by a friend sharing this picture: 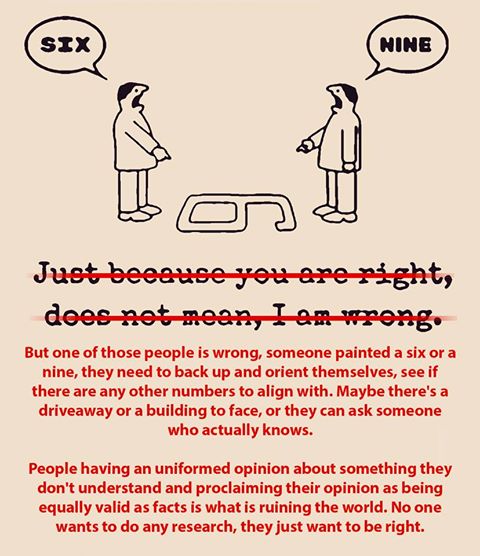 As previously mentioned by fellow #resist poster David, applying arguments from Erica Chenowich, liberation technology indeed has a darker side. In further drawing upon research by political scientist Anita Ghodes, Chenowich also finds that “governments are simply better at manipulating social media than activists”.[2] Painting a pretty grim picture of what pressures may come from what, and how, things are shared on social media. Activists may very well be the underdogs here. With so many matters related to development and/or social change largely depending on democratic governmental responses, it is hard not to question how much governments’ play their own parts in opinion-shaping  to manipulate the public in their favour. And how fruitful activism using social media can be in that type of personal/public-meshed media climate.

Now social media are arguably a great many things, but to place them into context briefly, I am using Graham Meikle’s definition that “social media are networked database platforms that combine public with personal communication”[3] and that have a multitude of cultural aspects that shape their use. For example, communication on social media follows certain patterns depending on which platform is being used. An important aspect of these patterns is that they have little to no cues on how, for instance, comments should be read.[4] I believe this absence of cues is important in cases of opinion vs. fact in particular. How are you supposed to know what is true on matters where you have little to no prior knowledge without any cues to their legitimacy?

Almost regardless of content, if you view political tweets in light of framing theory they tend to target certain issues and steer attention away from others, and the framing used can impact on the choices made by those who read them.[5]  And does digital activism become less impactful when the public views social media as arenas open to manipulation? (Fell free to add any thoughts on this in the comments below). So whilst your general person posting/sharing/tweeting isn’t necessarily doing so with a specific receiver in mind, what you read on social media may be a different story entirely. If you spout one untruth, it can be shared by anyone who finds it likely or agrees, probably it will be done less by those who do not. What does that mean in terms of rallying up people to support certain issues? Do the lack of interpretative cues equate to an overall lack of legitimacy, regardless of in relation to reliable information or alternative facts?

Finally, I’d like to point out a small but significant exception to the trendsof ‘sharing what you like’ dynamics -which is the @realDonaldTrump re-tweets. His tweets are seemingly shared in equal, if not greater, measure by those who do not agree with him, for example:

We must keep "evil" out of our country!

[5] Parmless, J.H; Bichard, S.L ‘Tweets on the campaign trail’ Politics and the Twitter Revolution. How Tweets Influence the Relationship between Political Leaders and the Public. Plymouth: Lexington Books. 2013, pp.168-9Save