Part 2 of 4: In the second post in my series about the Women’s March movement, I continue blogging about this interesting and increasing phenomena. In line with the aim of the #resist blog I also try to discuss what role new media activism has had in the Women’s March success, and how it has helped the international feminist movement generate traction.

Actions beyond the Woman’s March on January 21

After the success of the worldwide march on January 21, the Women’s March movement very soon declared upcoming actions:

“All of us together has built the Women’s March into a powerful global movement. Now it’s time to mobilize and demand that our elected officials Hear or Voice’” [1]

Through their web page www.womensmarch.com a series of “10 actions to take place in 100 days” was announced to commence after the march. At a global level, the movement also encouraged future actions addressing that “Women’s March Global is building and empowering a persistent global network that will organize future campaigns and actions in support of progressive values including women’s rights”.  The global actions are supposed to take place in parallel with the #womensmarch actions in the US. One of the three actions announced, is a “virtual week long Town hall”, which aims to “share a wave of thousands of grassroots-led protests, actions, and meetings directly engaging our communities and our own political representatives”.[2] There’s still no information about the impact of these events.

A call for an international strike on the 8th of March

Due to the positive results and impacts of the Women’s Marches on January 21st and the favorable momentum for organizing women all over the world, a group of US feminist activists and writers[3] —issued a call for “feminism for the 99 percent”, in an article in the Guardian the 6th of February.[4]

”While Trump’s blatant misogyny was the immediate trigger for the huge response on 21st  January, the attack on women (and all working people) long predates his administration. Women’s conditions of life, especially those of women of color and of working, unemployed and migrant women, have steadily deteriorated over the last 30 years, thanks to financialization and corporate globalization”.[5]

These feminist writers criticised “lean in -feminism” and other forms of corporate feminism arguing that they have largely failed to create better conditions for women around the world. What is needed instead, they argue, is a feminism that addresses the concerns and discrimination that women suffer in a more front-on way. A broader expansive and more inclusive approach in other words. Inspired by recent feminist struggles around the globe, such as the pro-abortion women’s strike in Poland,  the women’s strikes and marches in Latin America against male violence trough the #niunamenos movement; the vast women’s demonstration of last November in Italy and the women’s strike in defense of reproductive rights in South Korea and Ireland, these activists proposed an international strike against male violence and in defense of reproductive rights on the 8th of March 2017[6].

“Let us use the occasion of this international day of action to be done with lean-in feminism and to build in its place a feminism for the 99%, a grassroots, anti-capitalist feminism – a feminism in solidarity with working women, their families and their allies throughout the world”[7].

One of the writers of the article, Keeanga-Yamahtta Taylor, author of From #BlackLivesMatter to Black Liberation, belongs to another newly created feminist movement, The International Womens Strike (IWS) movement that uses the hashtags  #womansstrike or #HuelgadeMujeres[8] (as the Latin American sectien is called). IWS has its origins in late October 2016, before the Women’s March movement was established. It was created by women from different parts of the world as “a response to the current social, legal, political, moral and verbal violence experienced by contemporary women at various latitudes”. It defines itself as a grassroots movement and today IWS consists of women from 40 countries, many of them in Latin America.[9] By taking a more radical and anticapitalistic approach, than the Women’s March movement, they call for actions on the 8th of March “organized by and for women who have been marginalized and silenced by decades of neoliberalism…“[10]. They advocate for using a wide range of means of protest or striking, from total strike as producers in paid work or housholdework to boycott of companies using sexist advertisement, blockages of roads, sex strike and public marches.[11]

“March 8th will be the beginning of a new international feminist movement that organizes resistance not just against Trump and his misogynist policies, but also against the conditions that produced Trump, namely the decades long economic inequality, racial and sexual violence, and imperial wars abroad”[12]

The Women’s March, on the other hand, has a less radical approach than its sister organizations. For instance, they are calling to action for “A Day Without a Woman[13] claiming that “in the same spirit of love and liberation that inspired the Women’s March, we join together in making March 8 -A Day Without a Woman-, recognizing the enormous value that women of all backgrounds add to our socio-economic system…”[14]. Despite the different approaches facing the actions of the 8th  of March by these two movements, they appears supportive of each other’s actions and movements, providing links to each other’s webpages and re-tweeting each other on social media.

Using social media, like Facebook and Twitter as primary tools is a common strategy for new social movements. In my previous post I adressed Lievrouw’s (2013) argument about the extensive and sophisticated uses of media and information technologies by social movement, and its importance as the actual ﬁeld of action where movement concerns are articulated and struggles played out”[15].

For women, and for promoting gender issues, new media and ICTs could be an particularly efficient tool according to Mpofu (in Mutsvairo B, 2016)[16]. She studies the activism in support of women’s issues in Zimbabwe through a single case study of the website ‘Her Zimbabwe’ which attempts to empower women as citizens, giving them a platform to speak on issues otherwise ignored  in mainstream media. She hold, based on Harris (2008), the problem to be that women’s activism is frequently “policed and supervised by men who are in power and this usually excludes women from voicing their issues ‘outside formal politics from which they are also disempowered”[17]. It is therefore important to highlight the role technology-enabled conversations play to those powerless or voiceless (in this case women).

Mpofu (2016) emphasizes the importance of this by saying: “These techno-voices and conversations represent new directions in activism, the construction of new participatory communities (and cultures)…”[18].

Both the Women’s March and International Women Strike movement are great examples of this. Using social media platforms as their main tools to mobilize and engage women (and men) around the US and also internationally, the create a network of new participatory communities promoting women’s rights in a broad spectrum. Both these movements, give their followers and activists several platforms to express themselves on, through e.g. the organization of rallies and marches but also online participation. Through their social media platforms, followers are for instance encouraged to comments and debate. One example is the call to use the hashtag #Istrikefor by the Women’s March movement and #whyIstrike by the International Women’s Strike movement (Huelga  de Mujeres) where women are inspired to tell the world on social media why they are striking on the 8th of March. The same hashtag,#Istrikefor was used for the events on January 21st.

“Where women’s voices are constrained, the internet has given them a voice, that is, an online voice where internet-based platforms are used to freely ‘explore contemporary feminism and articulate their own perspectives”[19]

Another scholar, Keller (2012)[20], argues new media activism has allowed us to ‘productively rethink of women as ‘active agents’ rather than passive victims and cultural dupes in the online world. Relating this to the #womensmarch movement, whose active ‘agents’ managed to mobilize almost 5 million people in the U:S and around the world, new media activism has had an enormous impact no doubt. As we have seen, the increase of an international feminist movements is seemingly also following this path, however it’s too soon to say what the impact will be for the International Strike on the 8th of March. Efficient use of new media and digital activism by the organizers will probably be the key to its success, and might induce a huge opportunity for social change. 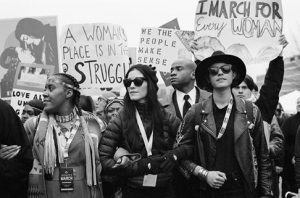