The International Women’s day 2017 was according to the The Guardian, “one of the most highly charged and political International Women’s Days in living memory”[1]. Although a massive strike of women from paid-labour did not took place, as the organizers had promoted, there where some smaller labour strikes reported. These strikes where not surprisingly held in more developed countries like Australia, where around 1000 childcare workers went on strike in the afternoon to protest over the wage gap and in the U.S., where a number of schools had to close in North Carolina, Virginia and Maryland as many female teachers requested a day off to take part in the strike[2].

Despite the lack off a massive strike from paid-labour, the both movements  – Women’s March and International Women’s Strike – mobilized  thousands of marches and rallies together with local organizations in more than 55 countries[3] during the 8th of March.

I had the opportunity to assist the massive march in Santiago de Chile, co-organized by the movement #NiunaMenos Chile, who struggles to end gender violence, and which is part of the Argentinian movement who inspired the organizers of Internaional Women’s Strike. #NiunaMenos Chile and other local organizations protecting women’s rights, students’ federations, workers unions and political parties joined a massive demonstration on the main street in Santiago, la Alamenda, gathering around 30 – 40 000 persons[5]. 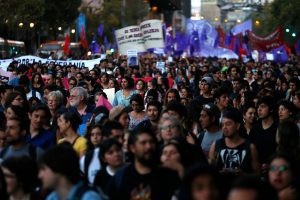 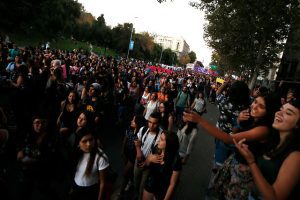 Pictures from the massive march in Santiago, Chile.

In Chile there where no mass strikes of women on workplaces reported, but on social media forum some unions report actions in the spirit of International Women’s Day although without making references to the international movement #WomensStrike /#MujeresEnHuelga. Actually, a strike of working women in Chile or any other country in the global south without no support from general unions or having the actual legal right to strike is less likely to occure, I would argue. This is mainly because of the general lack of protection for worker’s rights, even when the bigger unions are calling for strike. In Chile, e.g. many many people are too afraid of the consequences, for instance to loose their jobs if they would join a strike. So take the day off from your job without permission to join an International Women’s strike is a far away scenario for the majority. Many women in Chile and Latinamerica are also self-employed or running a small business[6] and that means taking a day off results in no income for her and her family.

In this conext, one of  the most efficient way of resistence seems to be activism in terms of marches and rallies on the streets, as the sucsess of yesterdays marches demonstrated, while simultaneously all over the world calling for more respect for women’s rights and gender equality.

Another way, especially for those who could not strike or march yesterday, was to use social media for activism – both by sharing pictures of actions at workplaces in suport for the cause and discussing issues regarding women’s rights, discriminaions and injustice with the online community. Can digital activism then empower women? Does it help women to engage promoting and defending their rights? I previously discussed Keller (2012)[7], who argues:  “Where women’s voices are constrained, the internet has given them a voice, that is, an online voice where internet-based platforms are used to freely ‘explore contemporary feminism and articulate their own perspectives”[8]. She and other scholars (Mpofu 2016, etc.) argues ICTs and new media activism has a huge potential for women’s activism.

"All of you who are striking, you're standing for every woman who is not able to strike." –@tabithastb #DayWithoutAWoman

In line with one of the collaborators on our blog, Elin Williams, who discusses Activism, or just Slacktivism? in her recent post, I emphasize that new media can be an efficient tool for “bring people to the streets” [9] which we have seen evidence from the International Woman’s strike on the 8th of March. The same author quoted by her, Lievrouw (2006, 2013), also addresses in a more recent publication that media and information technologies (referring to new media and social media platforms) can be “the actual ﬁeld of action where movement concerns are articulated and struggles played out”[10]. But what is then the role of the digital activists who fight this struggle online? Elin highlights an interesting point, while arguing the aim of online activism is basically about resisting. Because these activists are not aiming to start a revolution – their agency is more about support and promote a cause with the goal of “not to loose”. The activists aiming to start a revolution, and actually many of the women engaged in this movement expressed themselves in this direction, are probably not the ones which are only active online. They are probably already out on the streets marching and organizing public rallies.

But, digital activism is so much more than slacktivism – It is a great opportunity for many women who could not or did not want to strike or attend marches on March 8th . Maybe they are single mothers without no one helping them out and did not want to take the baby to the streets, or women or men with physical disabilities, or any other person who prefers this way of engaging for social change. So, by promoting the cause – in this case women’s rights and gender equality – through digital activism gives them an huge opportunity and possibility to participate. To have a voice. Although not in public, their activism shouldn not be neglected.  To reach social change, I believe this new feminist movement needs all the activists they can get – both on the streets and online.